Although a majority of people labelled as ‘D’ voters belong to the Bengali-speaking Muslims and Bengali-Hindu population in Assam, an estimated 23,000 Gorkhas are still believed to be carrying the tag in the state.

Guwahati: Manju Devi is tired of answering the same questions about her nationality. She is one of the many in Assam, whose name was excluded from the final National Register of Citizens (NRC).

“Is this not harassment?” asks the 55-year-old, who is the great granddaughter of freedom fighter, Chobilal Upadhyaya. “For years, the traumatized family has been running from pillar to post to prove our citizenship. Yet, we are left out of justice, of the NRC. Do you think we are Bangladeshis?”

Ironically, her great grandfather Upadhyay, was also the first president of the Assam Provincial Congress Committee formed in 1921, which was affiliated to the Indian National Congress during the freedom movement.

Not only Manju, but her two children share the same fate and were excluded from the final list. The authorities marked her and her children as a ‘D’ or a ‘Doubtful voter’, a claim she touts as ‘arbitrary’. “There is neither any pending cases against me before the Foreigners’ Tribunal (FT), nor with Assam’s Border Police. I filed an RTI, provided proof of my citizenship, and produced all the necessary documents before the NRC authorities,” she says, “but the nightmare just doesn’t end.”

For 56-year-old Maya Devi, a resident of Dhekiajuli in Sonitpur district, too, the curious case of being identified as a ‘D’ voter had led to her exclusion from the NRC list. This was even after she produced a clearance certificate from the Dhekiajuli circle office and had the police testify that there was no pending ‘D’ voter case against her.

“I have attended multiple hearings and have repeatedly submitted the clearance certificates. I have also submitted my school documents which show that I was studying in the fourth standard in the Borjarani Mikir LP School in 1970. It also mentions my date of birth as April 5, 1961, which is way before the cutoff date of March 24, 1971. Then why I am left in such distress? Who is responsible for such a glaring mistake?” says Maya, as she breaks into sobs. Although a majority of people labelled as ‘D’ voters belong to the Bengali-speaking Muslims and Bengali-Hindu population in Assam, many Gorkhas and people from other ethnic groups have also been carrying the tag since a long time.

In 1997, during an intensive revision of electoral rolls, the Election Commission had ordered that the letter ‘D’ be written against the names of voters who allegedly failed to prove their citizenship. Their cases were referred to the Foreigners’ Tribunals (FTs) in the state. A person declared as ‘D’ voter is not given the elector’s photo identity card and is barred from casting his/her vote.

However, these are not isolated incidents to have surfaced since the publication of the final list. An estimated 23,000 Gorkhas are still believed to be carrying the ‘D’ voter tag in the state.

Historians believe the Gorkhas living in Assam have roots here from before independence. They are mostly descendants of those, who migrated or were transferred from Nepal by the British as soldiers, road construction and tea plantation workers and labourers working for the railways and in associated industries like coal and farming. 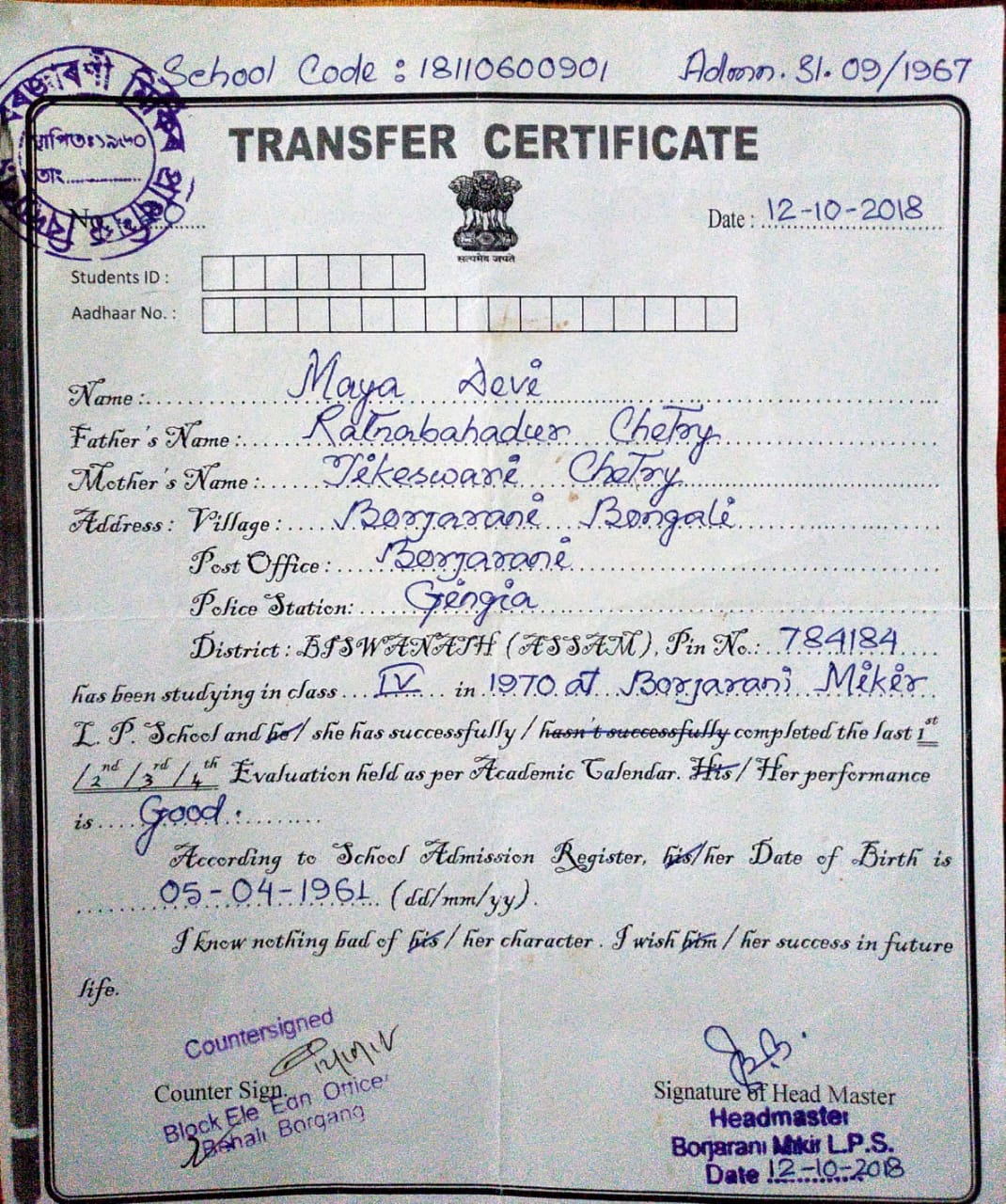 Dipak Nirola, former Secretary of the Assam Gorkha Sanmilan (AGS), considers this alleged ‘harassment’ of Gorkhas intentional and a part of a conspiracy.

“A previous notification by the Ministry of Home Affairs had stated that Gorkhas are not ‘foreigners’ under the provisions of the Citizenship Act 1955 - if they are born in the country; acquire citizenship by registration or naturalisation or were Indian at the time when the Constitution was exercise,” he says. “The notification directed the Assam government not to refer such cases to the FTs, but today, many of these Gorkhas are going to face the tribunals now.”

According to Bharatiya Gorkha Parisangha (BGP), an umbrella body of several Gorkha groups in the country, the NRC final list has left out around one lakh Gorkhas living in Assam. “As of now, it is suspected that over one lakh Gorkhas were dropped out of the final NRC. Names rejected in the NRC include mostly ‘D’ voter Gorkhas and several surname mismatches,” says Nityananda Upadhyay, president of BGP’s Assam State Committee.

Claims of such glaring discrepancies in the NRC with respect to the exclusion of Gorkhas have not gone unnoticed. While the issue has particularly caught the attention of the neighbouring West Bengal’s Darjeeling hills, politicians from the state, too, have begun to participate in the debate.

West Bengal Chief Minister Mamata Banerjee, who has been opposing the NRC since the beginning, took no time in reacting sharply. “Earlier I was not aware of the full NRC fiasco. As more and more information is coming in, we are shocked to see that names of more than one lakh Gorkha people excluded from the list. The government must take care that genuine Indians are not left out,” the West Bengal CM wrote on Twitter.

Binay Tamang, leader of the Gorkha Janmukti Morcha, too, announced that a delegation of the Morcha would visit Assam soon to assess the situation and support the Gorkhas whose names have not been included in the NRC. Tamang also demanded for an ‘Original Inhabitant’ (OI) status for the Gorkhas by adding them to a ‘Protected List’ in Assam.

However, these statements were countered by Darjeeling MP Raju Bista, who issued a strong rebuttal against the accusations. “All this talk about one lakh Gorkhas being left out of the NRC is a rumour and has no basis in facts. This figure is pure speculation on the part of a few individuals and the final figures of how many have been left out will only be determined after a few days, when we have official data in hand,” the MP said.

A statement issued by Bista’s office added that a few political parties were spreading misinformation and attempting to mislead people in order to gain political mileage. “The same people who have jeopardised the future of Gorkhas in Darjeeling hills are today trying to create a similar situation in Assam. I request them not to politicise this issue. I request everyone to be patient, and wait for proper information to be declared officially instead of allowing people with vested interests to create confusion, panic and disorder,” the statement said.