Cyclone ‘Mandous’ Updates: Light to moderate rains are likely in Karnataka’s Bengaluru and other districts as a result of Cyclone Mandous. The cyclonic storm entered Tamil Nadu on Saturday affecting traffic and uprooting over 400 trees. As Chennai reels from the damage caused by Mandous, Tamil Nadu Chief Minister MK Stalin said that the damage done by the storm was being assessed by the government.

So far, four people have lost their lives, over 150 huts and houses have been damaged and 400 trees uprooted. “We’ll first assess the damages incurred and if the need arises, we will ask the Central Read More

Heavy rains lashed several parts of south coastal and Rayalaseema districts of Andhra Pradesh early on Saturday after cyclonic storm ‘Mandous’ made landfall off Mamallapuram in neighbouring Tamil Nadu. According to an official release from the state government, 20.5 mm of rainfall was recorded in Annamaiya district, 22 mm in Chittoor, 10.1 mm in Prakasam, 23.4 mm in SPSR Nellore district, 2.4 mm in Tirupati district and 13.2 mm in YSR Kadapa district from 8.30 am to 5.30 pm today.

All India Anna Dravida Munnetra Kazhagam leader and former Tamil Nadu minister D Jayakumar on Saturday reviewed an area that was affected by Mandous cyclone near Chennai Kasimedu harbour. D Jayakumar hit out at the DMK government led by MK Stalin for allegedly being corrupt while constructing the bridge for the physically challenged in Marina.

On Friday, Devotees visiting Tirupati Venkateswara Temple in Tirumala faced several problems ranging from hampered darshan to difficulty in reaching hotels as heavy rain battered the city under the influence of Cyclone Mandous. As per reports, the low-lying areas of Tirumala, including the temple premises, witnessed waterlogging making it difficult for the devotees, including elderly and disabled persons, to commute from their accommodated hotels.

Roads got submerged and traffic was disrupted, as rivers overflowed in several areas of the KVB Puram Mandal on Saturday due to heavy rainfall in the region following Cyclone Mandous. The areas that faced such overflow of rivers included Kovanur, Thimmasamudram, and Rajula Kandiga.

Cyclone Mandous Leads to Cancellation of 4 Flights From Chennai

With Cyclone Mandous intensifying, four flights from Chennai stand canceled. Tamil Nadu state transport buses will also not ply two hours before the Cyclone touches the land and two hours after it. This is following a directive from Chief Minister M.K. Stalin to the state transport department.

Deep Depression (remnant of the cyclonic storm Mandous) weakened into a Depression over north Tamil Nadu. To gradually weaken into a well marked low pressure area during next 12 hours. pic.twitter.com/y1uJ0lIc6z

Rains and Cloudy Skies in Bengaluru and Neighbouring Districts

CM Stalin, who reviewed the situation at Kasimedu area, said the government anticipated the situation and put in all preventive measures and could therefore prevent major damage. “With advanced planning, this government proved any disaster can be managed,” he said. In Tamil Nadu, many trees had fallen on electric poles but the clearing work was on in full swing, the authorities. Around 25,000 civic workers were involved in various activities.

Cyclonic storm Mandous may have weakened into a deep depression but the impact it left while making landfall was havoc. So far, four people have lost their lives while several cars were damaged due to wall collapse in Tamil Nadu | READ MORE

Traffic movement on the Venkatagiri-Gudur state highway number 58 in Andhra Pradesh was interrupted on Saturday due to water logging as a result of the Mandous cyclone, said sources. The traffic disruptions took place near Balayapalli village where water from several nearby ponds filled the highway. A long queue of vehicles were seen crawling along the highway.

According to a status report of the AP government, Naidupeta in Tirupati district received the highest rainfall at 281.5 mm during the past 24 hours ending at 8.30 am on Saturday. A senior official of the State Disaster Management Authority told PTI that the intensity of the rains has come down as of now at 8.30 am.

400 Trees Uprooted Due to Strong Winds

Around 400 trees fell in the city under the impact of 70 kmph wind speed when the weather system crossed the coast in the intervening night of December 9 and 10, Tamil Nadu Chief Minister M K Stalin said. (PTI)

According to a report by Mint, review paper by Indian scientists looks into the reasons why this is happening and the role that climate change is playing. The paper, A Review Of Ocean-Atmosphere Interactions During Tropical Cyclones In The North Indian Ocean, published in the journal Earth Science Reviews provides a insight into how cyclones are becoming more frequent and more intense. The paper is written by scientists Vineet Kumar Singh and Roxy Mathew Koll, both from the Indian Institute of Tropical Meteorology-Pune (IITM), and builds on a major study the two co-wrote with other Indian scientists last year. READ MORE 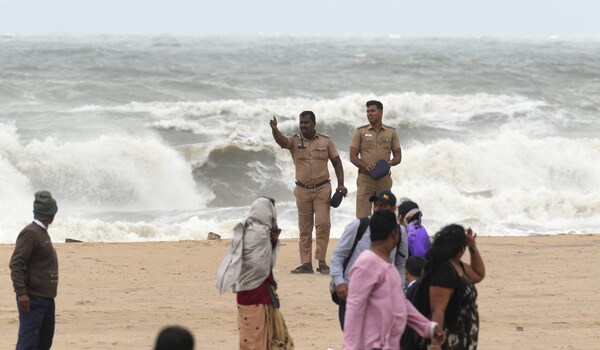 Security personnel ask visitors to move away from the Marina beach following the landfall of Cyclone Mandous, in Chennai, Saturday, Dec. 10, 2022. Cyclone Mandous, a severe cyclonic storm, made landfall late Friday night, crossing the coast in Tamil Nadu with a wind speed of 75 km an hour. The cyclone has now weakened into a deep depression. (PTI Photo/R Senthilkumar)
Dec 10, 2022 14:17 IST Fisherman shift a boat at the Kasimedu Fishing Harbour following the landfall of Cyclone Mandous, in Chennai, Saturday, Dec. 10, 2022. Cyclone Mandous, a severe cyclonic storm, made landfall late Friday night, crossing the coast in Tamil Nadu with a wind speed of 75 km an hour. The cyclone has now weakened into a deep depression. (PTI Photo)
Dec 10, 2022 13:48 IST

I inspected the affected areas. Corporation workers have worked very well. 4 people have lost their lives in this heavy rainfall. 98 cattle died too. 151 houses and huts got damaged, other damages are being calculated. In Chennai 400 trees uprooted: Tamil Nadu CM (ANI)

Government for funds,” he said.

The cyclonic storm Mandous weakened into a deep depression over the north Tamil Nadu coast and will gradually weaken into a depression as it moves west-northwestwards by noon on Saturday, as per the IMD.

The storm made landfall off Mamallapuram around Friday midnight and brought strong winds and heavy rainfall to parts of coastal Tamil Nadu including the capital Chennai. The Greater Chennai Corporation (GCC) issued an advisory to all to avoid going out until the cyclonic storm weakens. “Almost 65 trees have fallen down in 3 hours and GCC is taking measures to remove them. Motor pumps are being used to remove water stagnation in low lying saucer shaped areas,” it said.

The cyclone’s strength is weakening and it is moving west-northwestwards so areas in the northwest districts will witness strong winds of 55-65 kmph, which will decrease by evening to 30-40 kmph, said S Balachandran, DDGM, RMC Chennai.

Apart from this, waterlogging due to the storm was reported in Arumbakkam and Pattinapakkam areas of Chennai. The Tamil Nadu Education Department declared another holiday on Saturday for schools and colleges in Chennai, Chengalpattu, Tiruvallur, Vellore, Villupuram, Kancheepuram , Cuddallore and Ranipet districts.

Already, nearly 400 personnel of the NDRF and State Disaster Response Force teams have been stationed in coastal regions, including those near the Cauvery delta areas.

Heavy rains and strong winds were also experienced in Puducherry. Puducherry Chief Minister N Rangasamy chaired a meeting on Thursday to review the territorial government’s preparedness in case of exigencies arising due to heavy rainfall expected to pound Puducherry and Karaikal under the influence of a cyclonic storm over Bay of Bengal.