The cyclone struck the eastern coast early on Thursday with the maximum damage being recorded in Srikakulam and Vizianagaram districts of Andhra Pradesh and Odisha's Gajapati and Ganjam districts.

Amaravati/Bhubaneswar: Eight people were left dead in Andhra Pradesh when the severe cyclonic storm ‘Titli’ hit the eastern coast of India on Thursday. With winds up to 150 kmph, the storm and heavy rains wreaked havoc across Odisha and Andhra, uprooting trees, power lines, houses and roads.

The cyclone struck the eastern coast early on Thursday with the maximum damage being recorded in Srikakulam and Vizianagaram districts of Andhra Pradesh and Odisha's Gajapati and Ganjam districts.

The South Central Railway as well as the East Coast Railway cancelled several trains while some were terminated midway, officials said, adding a few express trains were also diverted.

While no loss of lives was reported in Odisha, the "very severe" cyclonic storm left a trail of destruction uprooting trees, electric poles and damaging hutments in the affected districts.

The cyclonic storm system is now moving northeastwards towards Gangetic West Bengal across Odisha and will weaken gradually, the IMD said.

According to the India Meteorological Department (IMD), Cyclone 'Titli' made its landfall near Palasa in Srikakulam district, south west of Gopalpur in Odisha with an estimated maximum sustained surface wind speed of 140-150 km per hour gusting to 165 km per hour between 4.30 am and 5.30 am. 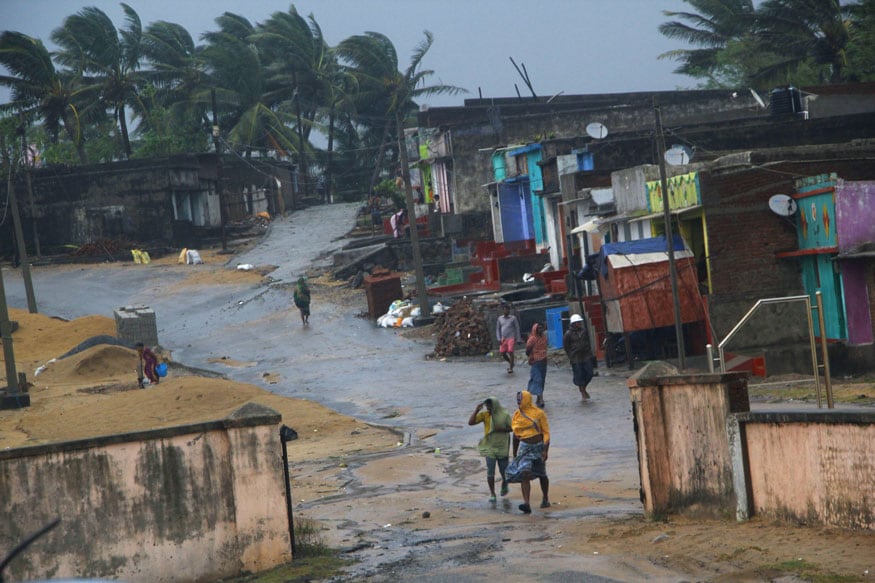 Locals walk near their houses as Cyclone 'Titli' hits the coast in Ganjam on Thursday. (Image: PTI)

While a 62-year-old woman died at Gudivada Agraharam village after a tree fell on her, a 55-year-old man died in a house collapse at Rotanasa village in Srikakulam district, the SDMA said.

The Andhra Pradesh Chief Minister's Office (CMO) said the other six killed were fishermen who had ventured into the sea.

Of the 67 fishing boats that had gone into the sea over the last few days from Kakinada in East Godavari district, 65 had returned to the shore safely, the CMO said, adding efforts were on to bring back the remaining two boats.

The Eastern Power Distribution Company, which caters to the electricity needs of the north coastal districts of Andhra Pradesh, reported that the distribution system for 4,319 villages and six towns in Srikakulam district was affected.

In Odisha, the cyclonic storm led to very heavy rainfall mainly in Ganjam, Gajapati and Puri districts and caused minor damage to power supply and communication. 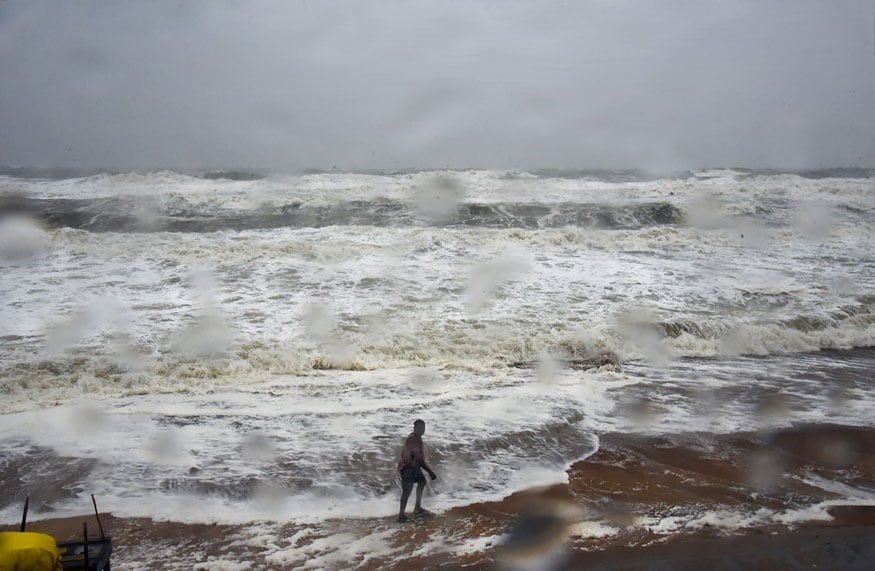 A person is seen along the coastline as Cyclone Titli hits Gopalpur in Ganjam. (Image: PTI)

"There has been no major destruction or report of casualty from any part of the state so far. Some damages like uprooting of trees and electric poles and damage to hutments were reported from Ganjam and Gajapati districts," he said.

Power supply and telephone links got disrupted, and road communication snapped due to uprooted trees at many places in Gajapati district, Sethi said, adding efforts are now on to clear the blocked roads and to restore power supply in affected areas.

Odisha Chief Minister Naveen Patnaik reviewed the situation in the state and instructed officials to expedite restoration efforts once the situation improves. He also directed the officials concerned to provide relief materials to cyclone-affected people.

"The chief minister gave instruction to send two more teams of NDRF to Gajapati where extensive damage has been caused to roads, hutments, electric and telephone poles," Chief Secretary A P Padhi said.

"The damage is less than what we had feared," the chief secretary said.

Padhi said the state government on Wednesday evacuated over three lakh people to safe places, which helped avoid loss of life in the natural disaster.

The evacuees are housed in 1,112 shelters where food and sanitation facilities are available, he said.

Altogether, 105 pregnant women in Ganjam district and 18 in Jagatsinghpur have been shifted to hospitals, Sethi said.

Some railway station buildings were damaged at a few places, including in Palasa. Signal poles and overhead electric masts were damaged at places between Palasa and Kottabomali stations, he said.