The police on Thursday raided some premises of Gorkha Janmukti Morcha chief Bimal Gurung and arrested party activists following which the outfit called for an indefinite shutdown in Darjeeling Hills. Arrows, sharp weapons and explosives were recovered during the raids, police said. The raids came on the fourth day of the GJM-sponsored indefinite strike as the political outfit, along with six other hill parties, demand for a separate Gorkhaland.

"The Gorkhas belong to India, but the state government has alienated them to such an extent that they lost their belief of belonging to this country. It is the identity crisis which has initiated such violence," BJP state vice president Chandra Kumar Bose told ANI.

"We will inform the Centre of the police atrocities and seek Centre's intervention", Giri who is in Delhi, told PTI over phone. "The present situation in the hills is created by the state government. They want to suppress us using huge police force", he alleged.

On the recovery of weapons, the GJM leader said, "What have they found? Khukri is part of our tradition, what is the harm in keeping it? Bows and arrows are traditional weapons. They were meant for students for archery competition".

Additional security reinforcements being moved to Patlebas in the government's bid to curb the attack by GJM activists on security forces. Meanwhile, the clashes still ongoing 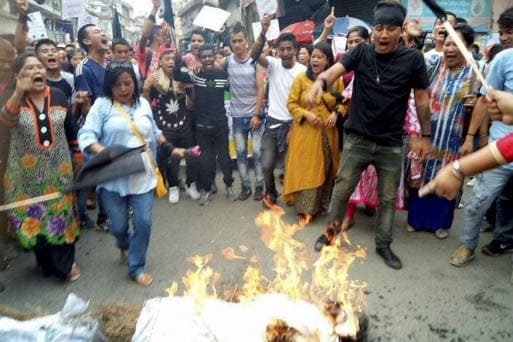 The police on Thursday raided some premises of Gorkha Janmukti Morcha (GJM) chief Bimal Gurung and arrested some party activists following which the outfit called for an indefinite shutdown in Darjeeling Hills.

RECAP | On Wednesday, Bimal Gurung said that the agitation for a separate Gorkhaland would go on till it was achieved. He had asked tourists to avoid visiting Darjeeling. The GJM's call for a separate state of Gorkhaland gained momentum after six other hill parties extended their support to GJM and unanimously passed a resolution, demanding a separate state on Tuesday. The Gorkha National Liberation Front (GNLF), an ally of the ruling Trinamool Congress, broke its alliance with the TMC and joined hands with the GJM for a separate state.

RECAP | The Centre had dispatched 600 paramilitary personnel to assist the West Bengal government in restoring normalcy in violence-hit Darjeeling hills. The Centre had also sought a detailed report on the prevailing situation in the hill district from the state government.

RECAP | The protests for a separate state of Gorkhaland were re-triggered by the Mamata Banerjee-led Trinamool Congress government's decision to make Bengali compulsory in schools across West Bengal. The Gorkha Janmukti Morcha (GJM) has called for an indefinite strike of all government facilities in the hills in the northern parts of the state. GJM leader Bimal Gurung has vowed to not stop till his party achieves the goal of separate statehood.

GJM supporters have set fire to Pedong police outpost about 17 kms away from Kalimpong town, the second biggest town of the hills. Morcha leaders claim that the bows and arrows were meant for an archery competition of school children which was scheduled to be held. A woman leader of GJM, Karuna Gurung, has been arrested from Kurseong. The Gorkha Nari Morcha, women's wing of the GJM, protests police raids outside Bimal Gurung's residence. Security forces have rounded up many protestors.

The police on Thursday raided some premises of Gorkha Janmukti Morcha (GJM) chief Bimal Gurung and arrested some party activists following which the outfit called for an indefinite shutdown in Darjeeling Hills. Arrows, sharp weapons and explosives were recovered during the raids at the premises in Singmari and Patlebas areas in Darjeeling, the police said. The police, however, denied that Gurung's residence had been raided. Infuriated by the police raid, the GJM has called for an indefinite shutdown in the hills from Thursday onwards.