Chennai: Tamil Nadu Chief Minister K Palaniswami on Tuesday said that higher number of testing led to an increased number of Covid-19 cases in the state, asserting that high population density, narrow lanes and use of public toilets made Chennai a challenge in cluster containment. The chief minister's comments came a day after the state saw its highest-ever jump so far with 527 positive cases.

Palaniswami had been under pressure recently amid mounting concerns of cluster outbreaks in the capital metropolis of the southern state after Chennai recorded a steady surge in positive cases over the last week.

The chief minister held a top-level meeting to review efforts to contain the virus in the city, especially in areas such as Royapuram, Anna Nagar, Thiru. Vi. Ka Nagar, and Kodambakkam.

Chennai itself recorded 279 fresh cases on Tuesday and the tally rose to over 2,000. 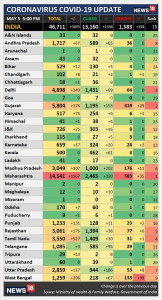 Tamil Nadu is struggling to contain its second cluster emerging from its primary wholesale market in Koyambedu. Earlier, it had hunkered down to stop the spread from the Tablighi Jamaat returnees, who attended the conference at Nizamuddin in Delhi.

The Markaz meet presented a challenge to the state to trace 1,500 people in the state; in comparison, the Koyambedu cluster is easily five times the size, according to bureaucrats and policemen directly involved in the cluster containment.

Efforts are on to move the primary wholesale vegetable market from Koyambedu to Thirumazhisai in the outskirts of the capital city.

In the press conference on Tuesday, Palaniswami listed out the steps taken on the administrative front to contain the virus, such as bureaucrat-led committees on contact-tracing, treatment policy, free food grain and distribution of essentials to ration card holders through May and June, and other welfare activities.

Disinfectants were being sprayed thrice a day in containment zones and essentials are provided every day to the people. In Chennai, there is an infrastructure of over 4,000 beds for Covid-19 patients, he said.

Besides the surge in total number of positive cases, Tamil Nadu has also been experiencing minor upheavals from migrants staying put in their respective locations since the beginning of lockdown in March end. Late on Monday, a group of migrants near Tambaram staged a protest seeking travel arrangements.

Palaniswami assured the 50,000 migrant workers in the state that their transport will take place over a week in a staggered manner.

The state altered its earlier decision to recommence sale of liquor amid stiff opposition to allow retailing in Chennai. A Public Interest Litigation was filed in the Madras High Court against liquor sales in all of the state on grounds that it would lead to abandonment of social distancing outside the stores. On Tuesday, the state government announced that it would retail liquor in all districts but Chennai.