Relief is expected only from the evening of November 7 but AQI will fluctuate within the 'very poor' range, the air quality forecast agency said. (File photo/Reuters)

Delhiites on Friday morning woke up to “severe" air quality and a thick blanket of smoke that shrouded the national capital post-Diwali. The air in Delhi and surrounding areas hung heavy with acrid smoke as people burst firecrackers on Diwali in a blatant disregard to the government’s ban on it amid a sharp increase in fumes from farm fires. The city’s overall air quality index was 451 at 8 am and entered the “severe" category, according to the Ministry of Earth Sciences’ air quality forecast agency System of Air Quality and Weather Forecasting And Research (SAFAR). 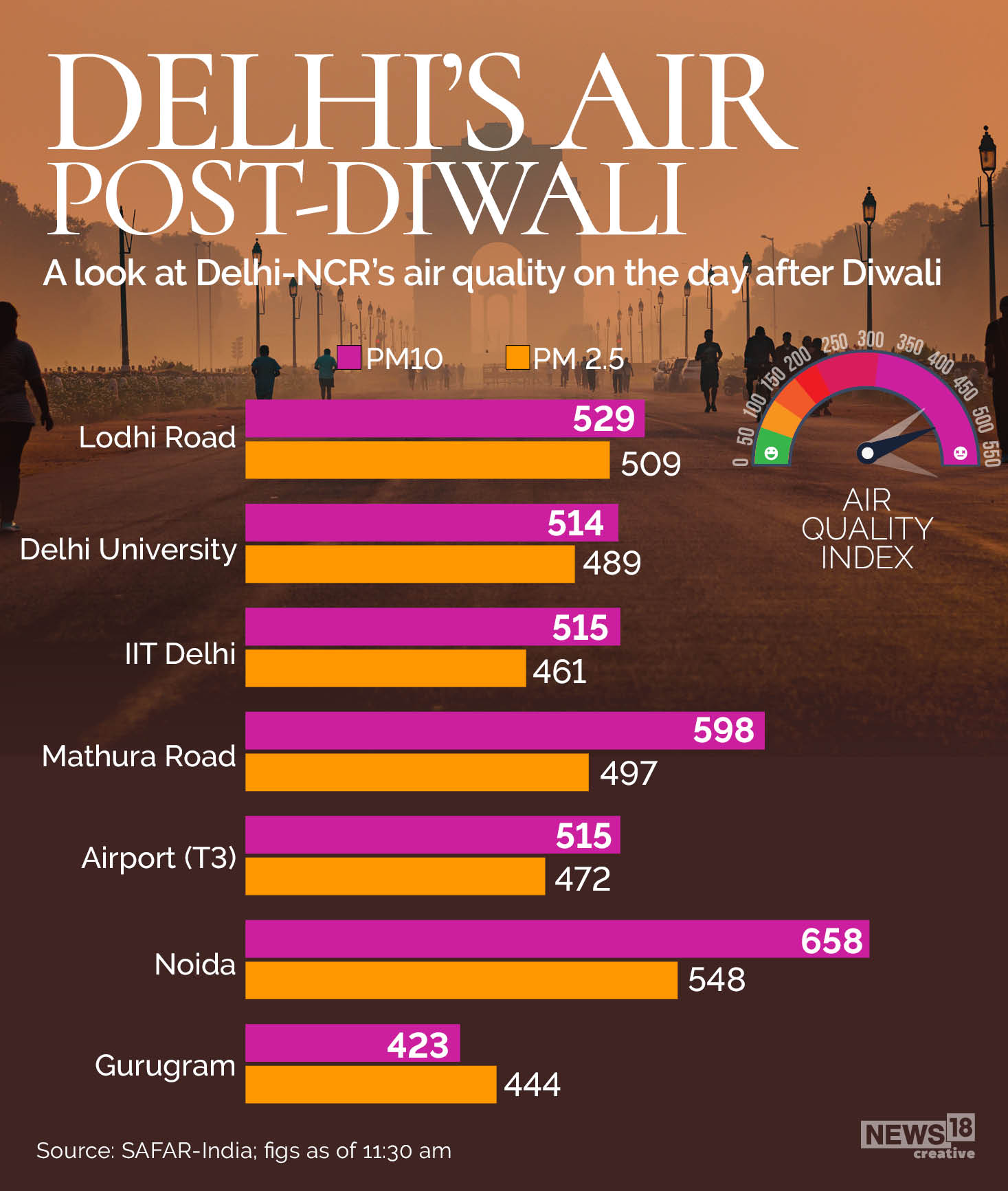 India Meteorological Department (IMD), Delhi’s RK Jenamani told ANI, “Overall air quality in ‘severe’ category today after bursting for firecrackers on Diwali and presence of bio-mass pollutants in Delhi. The air quality and fog condition to improve once windspeed picks up. No wind and high moisture is causing fog conditions."

Fog conditions intensified in Delhi-NCR on Friday morning lowering visibility at the Indira Gandhi International Airport and the Safdarjung Airport to the range of 200 to 500 metres at 5:30 am. Visibility in parts of the city dropped to 200 metres, said R K Jenamani, senior scientist at India Meteorological Department (IMD).

Of the 39 air quality monitoring stations in Delhi, 33 reported their AQI in the severe category. The capital’s air quality had entered the severe zone on Thursday night as people burst firecrackers on Diwali in a blatant disregard to the government’s ban on it amid a sharp increase in smoke from farm fires.

People from several parts of the city and its suburbs complained of itchy throat and watery eyes, as a layer of smog, the first this season, lingered over the region.

On Thursday, residents of Lajpat Nagar in South Delhi, Burari in North Delhi, Paschim Vihar in West Delhi and Shahdara in East Delhi reported incidents of firecracker bursting as early as 7 pm, despite the blanket ban in the national capital till January 1, 2022.

Several incidents of high-intensity cracker bursting were reported from Gurgaon and Faridabad despite a ban on the sale or use of all kinds of firecrackers in 14 of Haryana’s districts.

According to SAFAR model forecasts, stubble burning share may increase to 35 per cent on Friday and 40 per cent on Saturday with the wind direction changing to northwesterly. Northwesterly winds carry smoke from farm fires in Punjab and Haryana towards the national capital.

The Uttar Pradesh government had allowed the use of green crackers on Diwali only for two hours in areas with moderate or better air quality. Experts said the air quality turned severe owing to unfavourable meteorological conditions — calm winds, low temperature and low mixing height — and a poisonous cocktail of emissions from firecrackers, stubble burning and local sources.

The SAFAR said the share of farm fires in Delhi’s pollution rose to the season’s highest at 25 per cent on Thursday and is expected to go up to 35 percent on Friday and 40 per cent on Saturday. Relief is expected only from the evening of November 7 but AQI will fluctuate within the very poor range, the air quality forecast agency said. Last year, the share of stubble burning in Delhi’s pollution had peaked at 42 per cent on November 5.

Reacting to the air quality of the national capital, Congress leader Jairam Ramesh tweeted, “No country delights more in passing laws and then by-passing them than ours. Today, Delhi particularly is facing the consequences of this feature of our lives. Air pollution is at its most dangerous peak."