Delhi Air Pollution LIVE Updates: The Supreme Court today pulled up the Centre and state governments over the toxic haze enveloping Delhi, saying the Capital was choking every year and it could not be allowed in a civilised country as the right to life was the most important. “This can’t go on. Delhi government and Centre can't just pass the buck to each other. People aren't safe even inside their houses and rooms,” the court said.

“Why are crops still being burnt? This happens every year and the government doesn't do anything. We will call all those responsible here and settle it now,” the court said, adding that it would now monitor stubble burning. The bench was told by senior advocate Aparajita Singh, who is assisting the apex court as an amicus curiae in the air pollution matter, that as per the Centre's affidavit crop burning has gone up by 7 per cent in Punjab and is down by 17 per cent in Haryana.

AAP Spokesperson Dr Ajoy Kumar tells News18, "There is no bickering. Till Oct 15 the air in Delhi is clean then suddenly it goes bad drastically, therefore the reasons causing it is surely external."

#RightToBreathe - There is no bickering. Till Oct 15 the air in Delhi is clean then suddenly it goes bad drastically, therefore the reasons causing it is surely external: Dr Ajoy Kumar (Spokesperson, AAP) tells @SiddiquiMaha on #Viewpoint. pic.twitter.com/bEODlApZk3

"Delhites have always supported us in every stringent action that we have taken. Prevention of dengue became a mass movement & hence reduced the number of cases & today the people have shown overwhelming support," Delhi CM Arvind Kejriwal tells News18.

#RightToBreathe | Delhites have always supported us in every stringent action that we have taken. Prevention of dengue became a mass movement & hence reduced the number of cases & today the people have shown overwhelming support: @ArvindKejriwal tells @rupashreenanda pic.twitter.com/0zQKFQsQdB

Delhi Air Quality Bad Despite Fall in Stubble Burning: Agri Minister | Union Agriculture Minioster Narendra SIngh Tomar sais that the problem of air pollution "unfortunately" still persists in the national capital despite a fall in stubble burning incidents after the launch of a central scheme. He asked the state governments to identify other causes for the rising pollution and take measures. Machines are being provided in villages and "there has been reduction in stubble burning. Its contribution to pollution has also come down," he said. "I have written to the state chief ministers for proper implementation of the scheme. I hope state governments will do," he added.

Delhi Air Quality Better Today: Manish Sisodia | The air quality in Deli was much bettwe today, Delhi Deputy chief minister Manish Sisodia said. He added that at 4 pm it was only 93.

Delhiites Complied With Odd-even, Only 192 Challans: AAP | Delhi Deputy chief minister Manish Sisodia says, "People of Delhi have owned up the Odd-Even scheme. There has been high level of compliance till now. The first day has been highly successful. Total 192 challans have been issued today till now."

Delhi Deputy Chief Minister Manish Sisodia: People of Delhi have owned up the #OddEven scheme. There has been high level of compliance till now. The first day has been highly successful. Total 192 challans have been issued today till now. pic.twitter.com/4ToKX6fnxc

'I Would Urge All Delhiites to to Come Forwards: Atishi | AAP legislator Atishi Marlena speaks to News18, and says, "When there is an emergency then emergency measures should be taken. I would really like to urge Delhiites to come forward."

#EXCLUSIVE – When there is an emergency then emergency measures should be taken. I would really like to urge Delhiites to come forward: Atishi Marlena tells CNN-News18’s @rupashreenanda.#RightToBreathe pic.twitter.com/eW8bJXz3wJ

Responding to a lawyer's appeal to let no diesel generators run, Justice Deepak Gupta says, " We'll do that. But next we may ask what about your big cars & air-conditioners. Why do ACs run all the time? And on 18°? In Japan, there is a technology ACs can't go below 25° but here? Everyone must contribute."

Justice Deepak Gupta: We'll do that. But next we may ask what about your big cars & air-conditioners. Why do ACs run all the time? And on 18°? In Japan, there is a technology ACs can't go below 25° but here? Everyone must contribute..

Punjab, Haryana Govt Given 1,100 Cr for Stubble Cutting Equipment | According to government sources, Rs 1,100  crore has been given to Haryana and Punjab in the last couple of years in order to incentivise farmers to purchase machines for cutting crop stubble instead of burning it. The CPCB also issued a public alert and did a technical briefing.

Next Hearing on November 6: SC | The next hearing in the Delhi air pollution matter has been slated for November 6, i.e., Wednesday by the Supreme Court.

Lawyer representing Haryana government asks the Supreme Court to let the state's additional chief secretary be present in Court on Wednesday, in view of the state assembly being in session. The SC replies saying, "Let Chief Secretary be here..be here..be here. We will postpone your assembly otherwise."

No Power Cut in Delhi, Haryana, UP, Punjab Till Further Orders: SC | The Supreme Court ordered thgat no further power cuts be made in Delhi, Punjab, Haryana and Uttar Pradesh till it further orders to stop use of diesel generators.

#SupremeCourt orders there won't be any power cut in #Delhi, states of #Punjab, #Haryana and #UttarPradesh till further orders so as to stop diesel generators (DGs).

SC Orders Publicity of Directions, Rs 1 Lakh Fine on Trash Burning | The Supreme Court has ordered that its directions be widely publicised, and a fine of Rs 1 lakh be imposed on garbage burning. A fine of Rs 5,000 has been imposed on dumping trash in Delhi-NCR.

SC also orders wide publicity of its directions by governments in #Delhi, #Punjab, #Haryana and #UttarPradesh.#DelhiPollution#DelhiChokes

UP Minister Dara Singh, referring to implementation of the odd-even scheme in Uttar Pradesh says, "The traffic police and the DGP have been instructed to fully implement the odd-even scheme. The police department will decide when the scheme will be put into effect."

Submit Data on Odd-even Scheme: SC | The Supreme Court further orders the Delhi government to submit data on the odd-even scheme by Friday, showing how it has fared.

#SupremeCourt also orders #Delhi Govt to submit data on #OddEven by Friday regarding how this scheme has fared in the past.#DelhiPollution#DelhiChokes#DelhiSmog

No construction or demolition activities in Delhi-NCR till further orders, says Supreme Court making officials personally accountable in case of any failure. "Let all the industries which aren't necessary remain shut for the time being," adds SC.

SC Summons Chief Secys of Punjab, Haryana, UP | The Supreme Court has summoned chief secretaries of Punjab, Haryana and UP on Wednesday. Police departments and local administrations in all states ordered to ensure not even a single incident of crop stubble burning takes place. Chief secretaries, police commissioners and all other officials shall be held personally responsible if any incident of stubble burning takes place in Punjab, Haryana and Uttar Pradesh. States to also explain why should they not compensate for failing to contain the menace.

Farmer Can't Claim Right to Burn Stubble, Says SC | The Supreme Court in its order has said that farmers cannot claim that they have the right to burn crop stubble, as they have to grow different crops or use it as manure. It adds people can't be left to die.

Studies Advising People to Leave Delhi: SC | The Supreme Court says that many studies have asked people to leave Delhi and not return as the air quality has worsened drastically.

#SupremeCourt is dictating its order now, notes it is a shocking state of affairs where right to life is violated, life span of people is being reduced in #Delhi. SC adds there are studies advising people to leave #Delhi or not to come back. #DelhiChokes#DelhiPollution

According to the Central Government, 4 districts in Punjab contribute to 47 per cent of the total crop stubble burning. It tells the Supreme Court that these districts are Patiala, Tarn Taran and Sangrur. 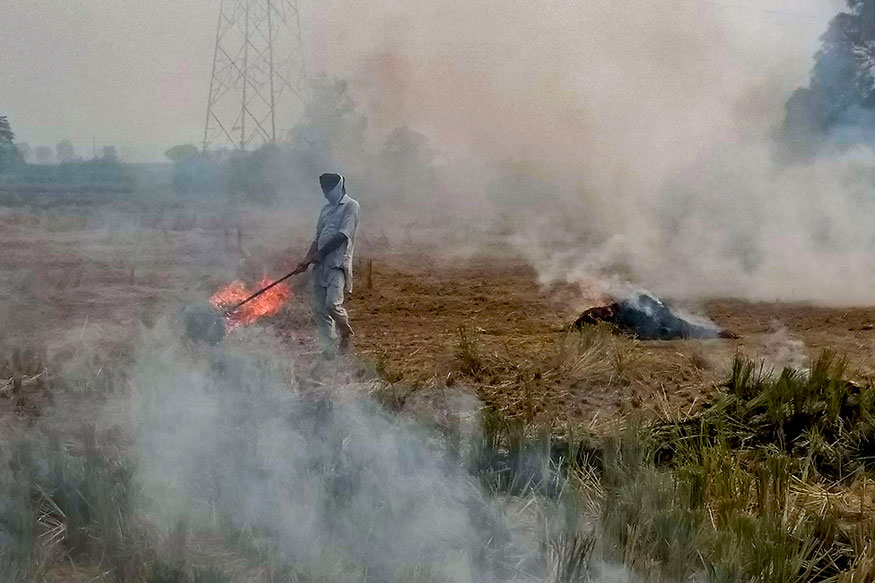 What's the Logic Behind Odd-Even? : SC | Supreme Court judge Arun Mishra asks Delhi Govt what the logic behind re-introducing the odd-even scheme is. "Banning diesel vehicles we can understand, but what is the point of odd-even scheme," he said.

Supreme Court on air pollution: Justice Arun Mishra to Delhi Government - What is the logic behind odd-even scheme? Banning diesel vehicles we can understand, but what is the point of odd-even scheme pic.twitter.com/xNrKuzdazs

"Farmers can't kill others for their livelihood..We have no sympathy for them if they go on doing this (stubble burning)," Supreme Court says on Delhi pollution.

"We follow the NGT and Supreme Court Committees. Other states don't follow," Arvind Kejriwal said. He also said that a total of 27 Lakh farmers burn their crops, but only 63000 machines have been distributed.

Kejriwal also claimed that Delhi is one of the few states where the pollution has decreased. Referring to the pollution between February and October, the Delhi Chief Minister said that the pollution in Delhi started from October 15.

Referrig to the stubble burning, Arvind Kejriwal claimed that the sky in the city was clean ten days ago. "How can the sky suddenly change in ten days", Kejriwal said.

'Delhi Pollution Decreased by 25%' | Arvind Kejriwal claimed that the pollution in Delhi has gone done by 25%. He added that afforestation has increased in the city and the bursting of crackers have reduced by 80% this year.

Meanwhile, the odd-even scheme in the national capital kicked in from 8am today as pollution levels peaked to a three-year high in Delhi and a thick smog enveloped the city, prompting hundreds of distraught people to say they wanted to leave the city due to poor air quality. On Monday, the Air Quality Index (AQI) showed major pollutants PM 2.5 and PM 10 were both at 500 — in the ‘severe' category.

According to the Central Pollution Control Board (CPCB), the national capital's 24-hour average air quality index (AQI) stood at 494 at 4pm on Sunday, the highest since November 6, 2016, when it was 497.

The apocalyptic haze stiffened its choke on Delhi and satellite towns as scattered rains on Saturday increased humidity, leading to smog and a cloud cover preventing sun rays from warming the ground. Low visibility due to smog at the Delhi airport led to diversion of 37 flights.

In order to curb pollution, Delhi Chief Minister Arvind Kejriwal on Monday urged citizens to support the odd-even vehicle rationing scheme, in which only even-numbered non-transport vehicles allowed on Delhi roads on the first day of the exercise.

The scheme will not be implemented on November 10 (Sunday) and the restrictions will also apply to the vehicles with registration numbers of other states.

The ATIs and revenue department officials will issue challans to the violators as well as ensure a proper enforcement of the scheme at 200 locations identified by the transport department, according to a government official.

Violators will be fined Rs 4,000. Head constables and officers of higher ranks in the traffic police, sub-divisional magistrates, tehsildars, ATIs and high-ranked officials of the DTC have been authorised to issue challans to the violators.

The opposition Bharatiya Janata Party (BJP) and the Congress have blamed the Kejriwal-led Aam Aadmi Party (AAP) government in Delhi for the air pollution crisis and termed the odd-even scheme as a stunt by the ruling regime, with an eye on the Assembly polls due early next year.