The DU Teachers’ Association said it had submitted a ‘white paper’ on the matter in June 2019, while alleging that the Ministry of Education and UGC were complicit in allowing misgovernance.

The President, who is the Visitor to the university, has also ordered an inquiry against Tyagi over allegations of dereliction of duty and placed him under suspension to ensure that the probe is fair and that he is not able to tamper with material records or coerce the witnesses, a senior official of the Ministry of Education said. Tyagi, whose tenure was scheduled to end on March 2021, has also been accused of lack of commitment and devotion to duty against him.

Also, all the orders issued by or with Tyagi’s approval during the period of his absence shall stand null and void, as per the order issued by the ministry. The move comes amid a power tussle in the central university. Tyagi has been on leave since July 2 when he was admitted to AIIMS under emergency medical condition. The government had on July 17 given Joshi the charge of VC, until Tyagi resumes office. 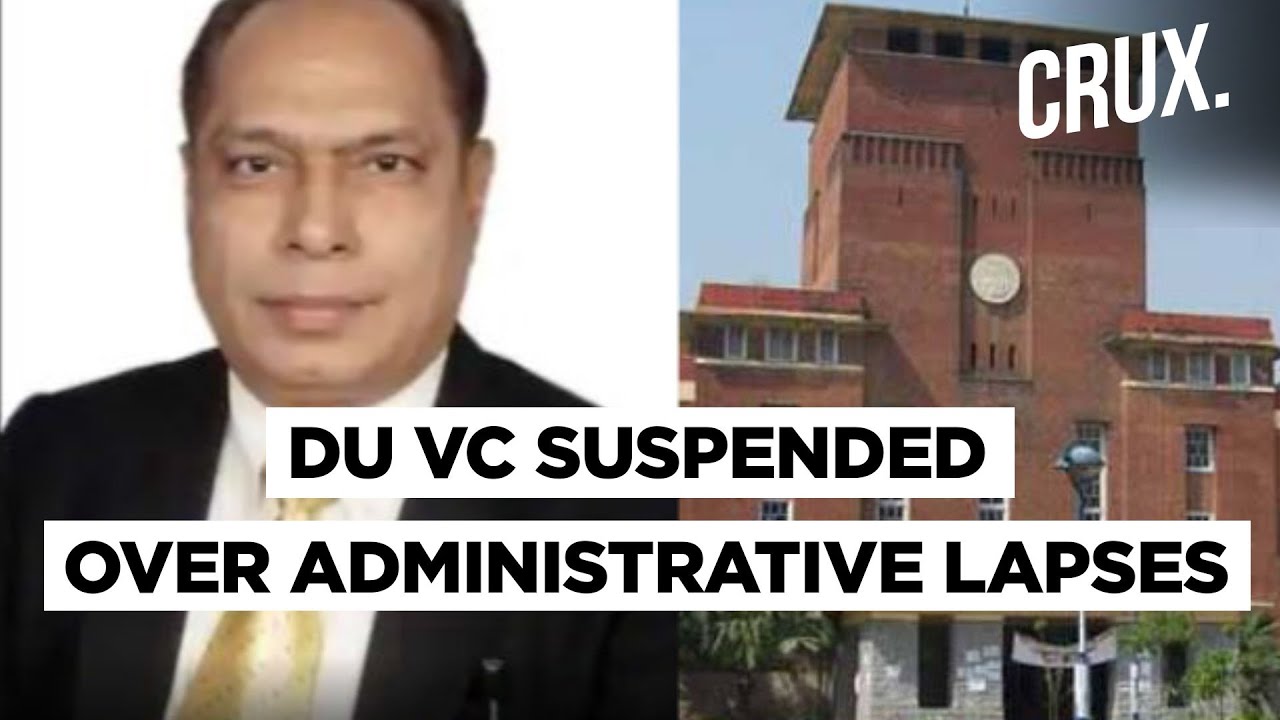 The DU Teachers’ Association said it had submitted a ‘white paper’ on the matter in June 2019, while alleging that the Ministry of Education and University Grants Council (UGC) were aware of the crisis in the university and were complicit in allowing misgovernance.

The ministry’s order threw light on the administrative lapses during Tyagi’s tenure with regards flagship schemes, appointment on key posts and acting flouting rules of the Delhi University Act 1922, and that several key posts remained vacant during his tenure.

It said that Tyagi failed to discharge his duties and responsibilities entrusted on him under the act. “Many statutory and key posts as given under hereunder remained vacant during his tenure in spite of regular follow up by the administrative ministry,” read the order.

The order said, “The PVC (pro-VC) assists the VC in all academic and administrative matters and during the absence of the VC performs the functions of the VC. However, the post of PVC was lying vacant since 2016 until Professor PC Joshi was appointed as PVC in June 2020 after great persuasion by the administrative ministry,” it added.

“The Registrar post is vacant from March 2020 to mid-October 2020 along with that of Finance Officer and Treasurer, which are vacant since March 2020.” The post of Controller of Examinations is vacant since the last six years, and of the “Librarian vacant since mid-2019 till now.”

This was observed by the dean of colleges, “responsible for looking after about 90 constituent/affiliated colleges and institutions.” This post is being managed by temporary arrangement, the order said.

The post of director of South Campus, who looks after all the colleges of South Campus and performs same functions as dean of colleges, is also being managed by temporary arrangement.

“There has been inordinate delay in appointment of permanent principals in many colleges, which is also a grave issue.” The constitution of governing bodies has also been delayed, the order further said.

“Despite clear message from the ministry to fill up the teaching posts in a time bound manner, the process to fill the vacancies has been delayed. The Honorable High Court of Delhi had also expressed its concern that faculty positions are not filled up on regular basis and ad hoc arrangements have been continuing for many years. Parliamentary committee on welfare of SC/ST in its meeting held on 20th October 2020 expressed displeasure over non filling of a large number of backlog vacancies in SC/ST category.” Despite meetings held with the education minister and secretary of higher education, “no substantial progress was made by the VC on above issues,” it said.

The order further observed that certain vigilance complaints and sexual harassment cases in the university are also pending for more than two years in violation of the provisions of the relevant Act, despite regular follow-up by the ministry. “This shows insensitivity on the part of the VC in disposing such matters.”

The VC’s alleged negligence on matters administrative matters came to fore in the handling of the issue of ad hoc teachers resulting in a mass agitation across colleges. This caused “inconvenience and loss of learning teaching days,” said the ministry.

On the recommendation of the Empowered Experts Committee (EEC) in its 542nd meeting held on August 2, 2019, the university was recommended for Institute of Eminence (IoE). On September 4, the ministry requested DU to submit its 15-year strategic vision plan and five years rolling implementation plan in the form of MoUs to be signed with the ministry. On March 30, 2020, the ministry requested all the institutions declared IoEs to submit a detailed project report by April 30.

However, the university submitted its DPR in the last week of September. “This delayed the implementation of the flagship scheme of this ministry in DU,” said the order.

Tyagi was admitted to AIIMS, New Delhi, in the first week of July 2020 for an emergency surgery. Since then he has not attended the office and stayed away from official duties. He neither sought any leave nor informed the EC. He did not even attend any meeting since then, including the Visitor’s conference on implementation of NEP 2020 on October 19, the ministry said.

An EC meeting scheduled for October 10 when the agenda was to discuss appointment to various posts, including that of registrar and FO was postponed on the verbal instruction of Tyagi for 10 days. Tyagi had reportedly said he would resume duties by then. However, it had to be postponed against for “no reason on record”.

A controversy erupted last week when Tyagi removed Joshi as pro-VC on Thursday and appointed Geeta Bhatt, the director of the Non-Collegiate Women's Education Board of the university, in his place. Joshi had, meanwhile, notified the appointment of a new registrar, Vikas Gupta, whose interview had been completed and appointment cleared by the executive council on Wednesday.

However, the same day, Tyagi had approved and notified the appointment of PC Jha as acting registrar and director of the South Campus. The ministry then intervened in the power tussle between the vice chancellor and the pro-vice chancellor, saying appointments made by Tyagi were not "valid" as he is on leave.

The power tussle intensified with Jha writing to the ministry citing himself as "acting Registrar" and saying that all decisions taken by Tygai are in accordance with university norms.

“Prof Jha tried to disrupt the EC meeting. However, this was not allowed, as EC resolved that Prof Suman Kundu would continue as Director South campus and Acting registrar till duly appointed registrar joins,” it said. The ministry took objection to the letter and directed the varsity to take strict action against him.

“Thus, he tried to hamper smooth conduct of EC meeting and selection committee meetings by making parallel appointments. By these arbitrary decisions he created an environment of conflict and uncertainty in the administrative functioning of the university.”

Meanwhile, DUTA said the fact that action is being initiated and inquiry has been set up is confusion. It said the move comes following a bitter fight between two factions of the “right-wing” “Is this about justice for the teachers and the University or part of the muscle flexing being witnessed over the last week or so," it said in a statement.

"The ministry is equally guilty of creating crisis after crisis in DU, whether be its agenda to privatise through forced MoUs or the recent imposition of OBE on hapless students", said DUTA treasurer Abha Dev Habib.