As First Signs of Thaw Appear in Brahmpuri, Volunteers Bring Much-needed Food and Medicines to Riot-Affected

Volunteers from the Delhi Sikh Gurdwara Prabandhak Committee, aided by committees of civil defence volunteers, have started relief work in the area. Members of both communities and both men and women gathered to reach out for provisions, overcoming their fear and mistrust.

People line up at an ambulance in Brahmpuri on Thursday.

New Delhi: Northeast Delhi’s Brahmpuri has seen some of the worst instances of communal violence over the past three days. In this locality, members of Hindu and Muslim communities live on either side of a small road running through it. To prevent an onslaught from mobs, both have erected makeshift barricades from their side. Groups from both communities have also been eyeing each other from across the road over the past three days of mayhem.

But on Thursday, one could witness the first signs of thaw in this uneasy, icy relationship.

Parked not far from the spot where News18 on Tuesday had witnessed how seven shops were looted and then set on fire one by one was a truck and an ambulance, with people from both communities lining up outside them to receive first-aid and food.

Volunteers from the Delhi Sikh Gurdwara Prabandhak Committee, aided by committees of civil defence volunteers, have started relief work at this tense spot where members of both communities and both men and women have gathered, overcoming their fear and mistrust. Volunteers outside homes in Brahmpuri.

Yasmeen Asif, 35, said he was suffering from cough and pain in his chest. The dense, black smoke hanging over the area, billowing from dozens of shops and still-smouldering houses, was choking and making it difficult for him to breathe. He had come to the ambulance to get himself checked.

“For the first time this week, I am seeing someone doing relief work in our street. I already had a cough problem before the riots started, but the area’s condition was not good due to which the dispensary and chemist shops were closed,” he said. “The Sikh brothers and sisters are doing noble work. This type of help should be provided everywhere. People are in great distress everywhere.”

Standing behind him in the queue of patients was 29-year-old Gajinder.

“My legs had been paining for the past three days. The situation was so bad that I couldn’t go out for treatment. Even medical shops were closed,” he said. “Today, these people came and gave us medicines. Now I’m also helping the volunteers in queuing up people who come.”

Gajinder said the “Sikh brothers” were performing a good act by providing food. “People who were working on daily wages haven’t earned for the last four days. How will they manage to buy food for themselves?” he asked.

Ambulances and many such trucks with food material on Thursday started doing rounds of violence-hit areas such as Ghonda, Ambedkar Basti, Brahmpuri and Shri Ram Colony.

“They are going to every house and asking people if they need food to eat. I’m really grateful to them,” said Mohammed Akram. 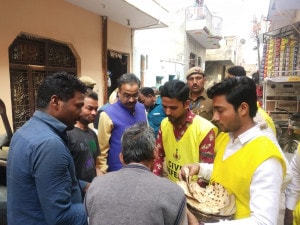 Rajbinder Singh, who works with the Delhi Gurdwara Prabandhak Committee and is one of the volunteers, said the organisation has been providing food and medicines to the people of these affected areas. The aid is being brought from Gurdwara Bangla Sahib.

“Four trucks carrying ‘langar’ had gone out around 6am from Gurdwara Bangla Sahib and we have served around 700 people,” he said.

Dr Milab Kamal Singh, volunteering as a physician, said he and his team have attended to more than a hundred people since Thursday morning.

“Most people are suffering from cough. That could be because properties were set on fire,” he said. “No major case has been noticed yet, only people with small heath issues have come to us for medicines.” 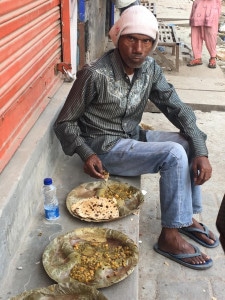 A man eats food distributed by the volunteers.

On the other side of Northeast Delhi in Guru Tegh Bahadur (GTB) hospital where most victims of the violence have been brought, a group of volunteers was seen distributing packets of ‘pulao’ and water pouches to relatives of injured patients. Shafeek Ahmad, their leader, said members of Jama Masjid in Old Seemapuri were coordinating with hospital authorities to distribute medicines, volunteer for blood donation and arrange for funeral rites of those who could not afford it. Ahmad claimed the group has so far helped more than 150 people with food and water.

So far, the violence has claimed 38 lives in Northeast Delhi, with areas slowly limping back to some form of normalcy on Thursday.