Sasikanth Senthil, Deputy Commissoner of Dakshina Kannada district, said in his resignation letter that he felt 'it is unethical for me to continue as a civil servant in the government'.

Bengaluru: A young bureaucrat from Karnataka, Sasikanth Senthil, has quit the coveted Indian Administrative Service (IAS), expressing concern over the “future of India” in his resignation letter. Hours later, the government appointed Sindhu B Rupesh as the new deputy commissioner for Dakshina Kannada district where Senthil was working.

Senthil, a 2009 batch IAS officer, is currently serving as the Deputy Commissoner (DC) of Dakshina Kannada district. A native of Tamil Nadu, Senthil wrote in his letter that democracy was being compromised in an unprecedented manner.

“I have taken this decision as I feel that it is unethical for me to continue as a civil servant in the government with the fundamental building blocks of our diverse democracy being compromised in an unprecedented manner. I also feel strongly that the coming days will present extremely difficult challenges to the basic fabric of our nation and that I would be better off outside the IAS to continue with my work at making life better for all,” he wrote. 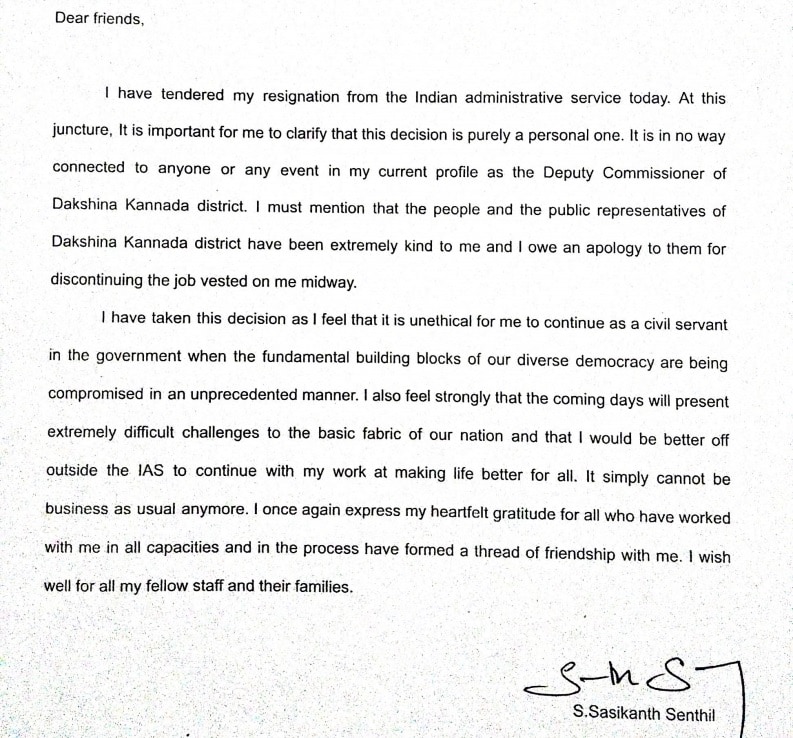 The resignation letter by Sasikanth Senthil.

Even though the bureaucrat claimed that he was resigning for personal reasons, he wrote: “It simply cannot be business as usual anymore”.

According to IAS circles, he sent his resignation via WhatsApp on Friday morning and a fellow IAS officer tried to persuade him to withdraw it. However, Senthil refused to take it back, saying he thought over the decision for six months. The officer has earlier served in Shimoga, Raichur and other districts.

A few months ago, a 2011 batch IPS officer from Karnataka, K Annamalai, quit the Indian Police Service to serve society in a different way. He, too, was a native of Tamil Nadu.

The Karnataka chief minister’s office is yet to react to the development.