Did Karti Chidambaram Travel to London to Close his Bank Accounts?

According to a probe report of Enforcement Directorate, Karti is directly or indirectly linked to at least nine bank accounts in London. These bank accounts exist in UK-based Metro Bank.

New Delhi: Central Bureau of Investigation has claimed that Karti Chidambaram visited London in May and June to close certain bank accounts after an FIR was filed against him.

CBI has also submitted in the Supreme Court that during his visit to the United Kingdom, son of former Finance Minister P Chidambaram, tempered with the evidence.

According to a probe report of Enforcement Directorate, Karti is directly or indirectly linked to at least nine bank accounts in London. These bank accounts exist in UK-based Metro Bank.

Sources told CNN-News18 that Karti has not disclosed details of these bank accounts to the concerned authorities in India.

ED’s probe report says, “Under the circumstances, credits and debits transactions in the nine bank accounts are suspected to be linked with the illicit funds generated and spilled over to various unknown destinations in and outside India by Karti Chidambaram and his associates. Therefore, such funds held in the UK in the nine bank accounts are neither bonafide nor genuine.”

Both ED & CBI are probing the role and connectivity of certain individuals and companies with Karti Chidambaram. The role of former Deputy British High Commissioner to India, Michael Stephen Nithvrianakis, is also on the radar. CBI & ED are probing his role in the flow of funds in a company named Totus Tennis Ltd, which is owned and controlled by Chess Global Advisory Services (a company owned and controlled by Karti Chidambaram), according to probe report.

ED and CBI are also probing Karti’s connection with a company named Holben Holt Ltd and an individual named Ms. Mooney Lorraine. According to agencies, evidence shows that Karti is connected to certain properties as well in the United Kingdom. Documentary evidence from the Land Registry records shows that Karti owns properties in posh localities in London. The properties on the radar of Indian investigative agencies include:

Karti has disclosed his address as — 5 Holben Close, Barton City, Cambridge, CB237AQ — with UK authorities. Interestingly, the expenditure for a renovation of this house was borne by Metro Bank account number 16714313. The account is in the name of Ms Mooney Lorraine. Lorraine is the sole director of Holben Holt Ltd and resides at 4, Church Lane, Barton, Cambridge, United Kingdom, CB23 7BE.

When CNN News18 broke this news on TV, Karti Chidambaram responded in a series of tweets:

“Every remittance is as per LRS policy of RBI and dully reflected in our statutory and regulatory filings. This is a campaign of innuendo”

“This campaign of smear must end! All my filings are up to date and accurate”

“I categorically state my IT/RoC/RBI filings are up to date/accurate. So is my EC affidavit of ’14”

“As a PEP in am obligated to show source of funds under AML in UK. To suggest undisclosed assets is all bumkum. My IT return scrutinized too.” 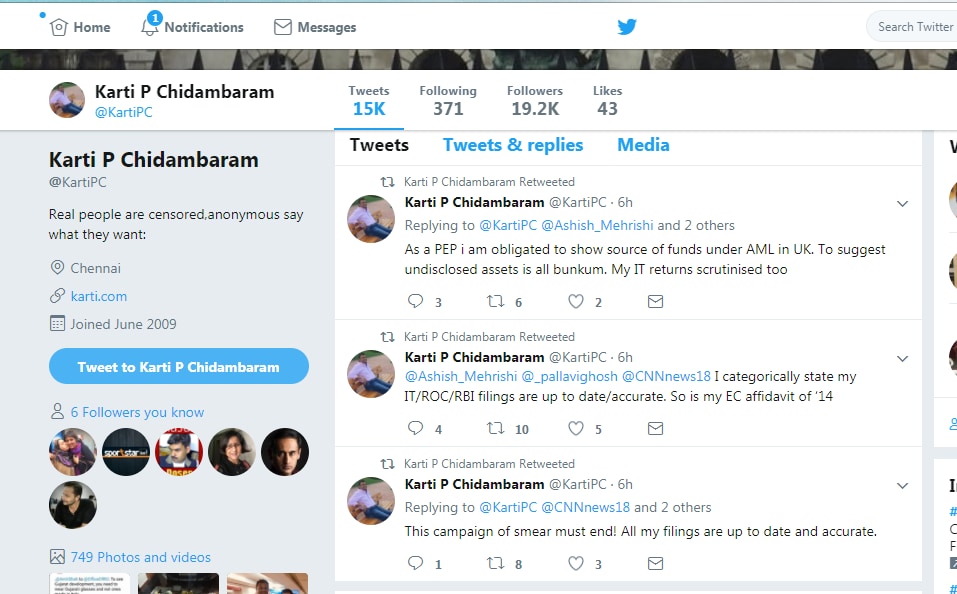