Restrictions under Section 144 of CrPC have been imposed in Bengaluru.

The imposition of Section 144 of CrPC, which prohibits the assembly of four or more people in public, in areas under DJ Halli and KG Halli police station limits has been extended till 6am on August 15. These two stations bore the brunt of the violence.

The Karnataka government on Wednesday decided to conduct an inquiry through a District Magistrate into the violence in parts of the city last night in which at least three people were killed and scores of others injured. Home Minister Basavaraj Bommai said the government will recover the losses, arising from damage to public property during the violence, from the rioters.

At least three people were killed after the police opened fire to quell a mob that went on a rampage, irked over asocial media post allegedly put out by a Congress legislator's relative, as a city locality witnessed arson and violence. Scores of persons, including around 50 policemen, were also injured in the violence that erupted on Tuesday night and continued till the wee hours of Wednesday, apparently prompted by the 'communally sensitive' online post.

Six companies of the Central Reserve Police Force (CRPF) were also dispatched to the violence-hit areas.

The city's Commissioner of Police on Wednesday night said the imposition of Section 144 of Code of Criminal Procedure (CrPC), which prohibits the assembly of four or more people in public, in areas under DJ Halli and KG Halli police station limits has been extended till 6am on August 15. These two police stations bore the brunt of the violence. 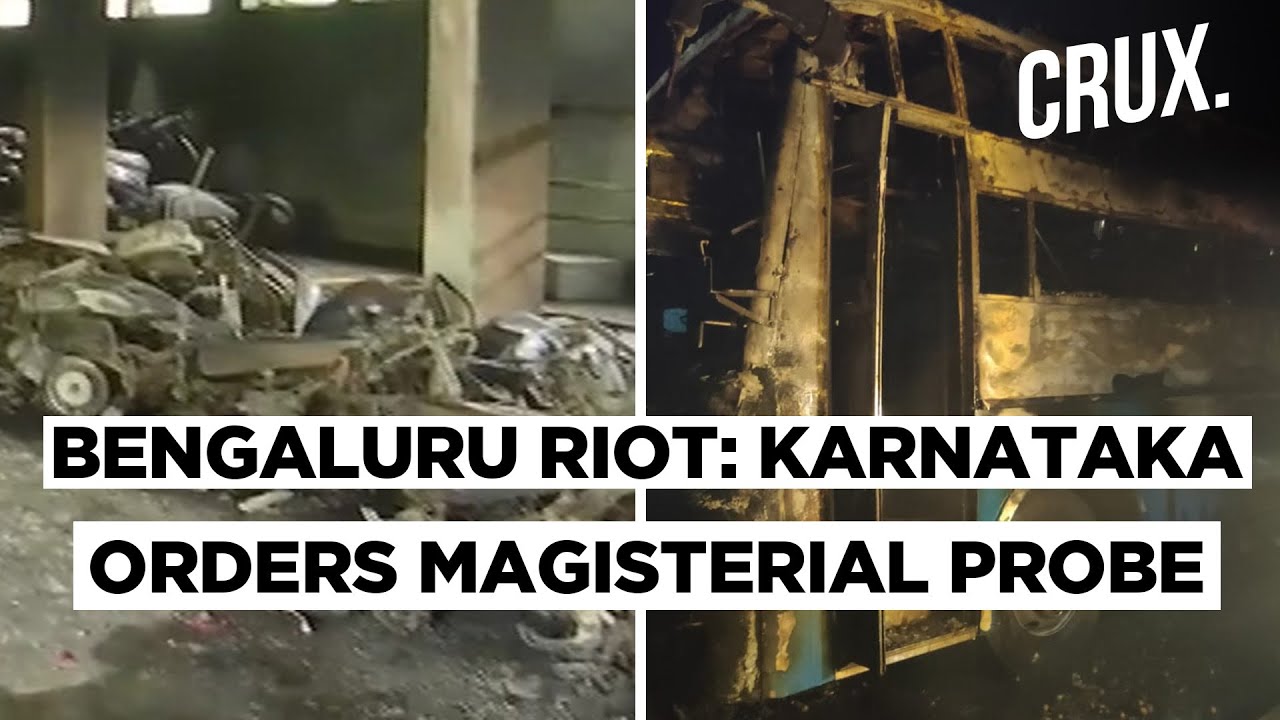 "There are National Human Rights Commission guidelines for such a situation, as per which the inquiry will be conducted by the district executive magistrate. This decision was taken at the meeting headed by the Chief Minister," Bommai said. He added that Chief Minister BS Yediyurappa reviewed the complete situation and the action taken by police.

Yediyurappa, who was discharged from a hospital on Monday after undergoing treatment for Covid-19 infection, is currently under self-quarantine at home. Ahead of the meeting with him, Bommai said the government has decided to recover the loss arising out of damage to public property and vehicles during the violence by making those involved in such acts pay for it.

He said that buses, vehicles and properties were burnt in DJ Halli and KG Halli police station limits. All those losses will be recovered from those who have done it. "There is media and CCTV footage," he said.

Bengaluru South MP Tejasvi Surya earlier in the day wrote to Yediyurappa requesting him to confiscate the properties of rioters and recover losses caused to public property.

"I request Sri @BSYBJP to confiscate and attach properties of the rioters and compensate losses to public property in the same way as Sri @myogiadityanath govt did in UP. Bengaluru is known for its peace and harmonious society. We must protect this strength of our city at all costs," he tweeted.

Terming the violence in the city as a "well planned act", Karnataka Revenue Minister R Ashoka said the "traitors" who perpetrated the riots would be dealt with an iron hand and steps would be taken to ensure that such incidents do not recur.

Speaking to reporters after meeting Congress MLA Akhanda Srinivasa Murthy, whose house was set ablaze, Ashoka said, "The manner in which the riots were perpetrated shows that it was a well planned act and was intended to spread to other parts of the city. These are traitors and we will subdue them."

Ashoka said the lawmaker's house was completely damaged and belongings including, sarees and jewels were looted while the rest was set on fire.

"It is clear from the intensity of vandalism that the intention was to attack and finish off Srinivasa Murthy. It has to be investigated whether any anti-social elements from within the state and outside were involved," Ashoka said.

Claiming that the violence was planned to terrorise the people of Bengaluru, Ashoka said the government will send across a strong message so that no one would ever dare to take law into their hands again.

At least 110 people allegedly involved in the violence and the accused who posted the communal post have been arrested.