Students at IIT-Bombay protest against the attack on their counterparts in Delhi's JNU. (File photo)

Although the letter does not specify what the college administration construes as “anti-national” or “undesirable activities”, the warning comes amid protests against the contentious Citizenship Amendment Act.

Mumbai: Hostel residents at IIT-Bombay have been asked not to take part in any “anti-national, anti-social or any other undesirable activities" in an email sent on Tuesday by the Dean of Student Affairs.

Although the letter does not specify what the college administration construes as “anti-national” or “undesirable activities”, the warning comes amid protests against the contentious Citizenship Amendment Act and in solidarity with students of Jamia Millia Islamia and the Jawaharlal Nehru University.

The email letter, a copy of which was accessed by CNN-News18, lists out 15 rules, which the students are expected to follow at all times. Apart from the caution on “anti-national” activities, which is point 10 on the list, other things barred are the distribution of leaflets or pamphlets and speeches, plays and music "that disturb the peace of the hostel environment".

It states only matters that are approved from the office of Dean of Student Affairs will be permitted on campus. The circular has warned students of partial or permanent suspension from hostel if rules, which come into effect immediately, are violated. 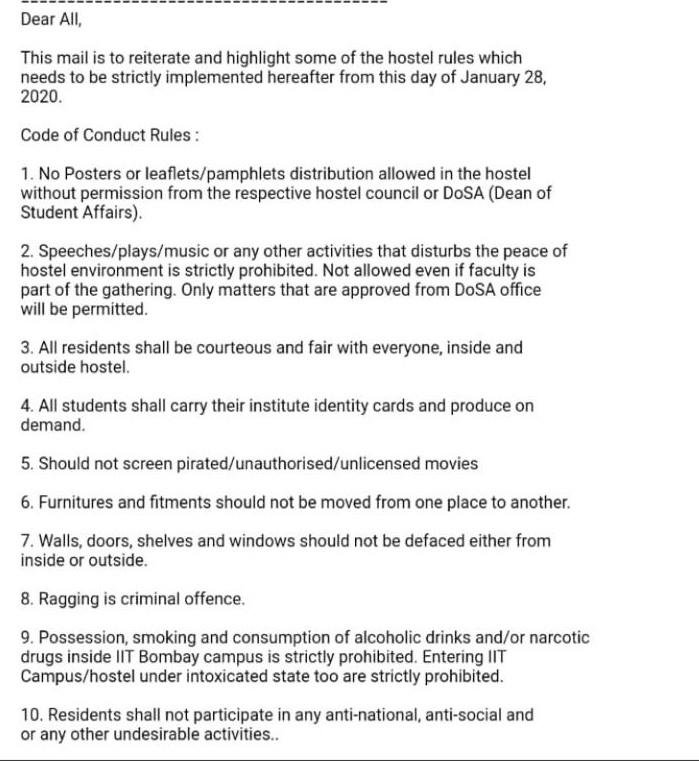 The emailed circular to hostel residents at ITT-Bombay.

The students feel that this has been done to silence voices of dissent, especially because students of the campus have been actively participating in the anti-CAA protests happening nationwide.

A student, on conditions of anonymity, said, "There is no clarity on what amounts to anti-national and anti-social activity. We are trying to understand what is allowed and what is not. But it is disheartening that there is a clampdown by the campus administration on freedom of expression."

Another student said that these restrictions will not bog them down. "We will continue to protest against the CAA. The campus administration should come out with more clarity and not issue vague circulars. Staging a protest is our democratic right."

The circular comes barely days after nearly 1,500 students took part in a rally on the eve of Republic Day in order to create awareness about the Constitution. On Republic Day, another march was held by students and faculty, called 'Reclaiming the Republic'. Several posters in support of women protesting at Delhi's Shaheen Bagh were seen during the march.

The massive protests at the premier engineering college had prompted a professor to remark that he had not seen anything like this on campus in the last 20 or 30 years.

IIT-Bombay students were also among the hundreds of people who had gathered at the Gateway of India in a "spontaneous" protest against the mob attack on students in Delhi's JNU as well as the CAA and NRC. A fortnight ago, some students and members of the administration had also removed posters put up against the citizenship law, but had described the move as "apolitical".