'For Years Lord Ram Lived Under a Tent, Now A Grand Temple For Him': What PM Modi Said in Ayodhya

Prime Minister Narendra Modi in his address to seers and other guests on the occasion of 'Bhoomi Poojan' said that with the construction of the grand Ram Temple, history is not only being made but is being repeated.

Prime Minister Narendra Modi in his address to seers and other guests on the occasion of 'Bhoomi Poojan' said that with the construction of the grand Ram Temple, history is not only being made, but is being repeated. Modi was addressing the attendees of the ceremony after he laid the first brick of the grand Ram Temple in Ayodhya at 12:44pm on Wednesday, as per the 'muhurat' for 'bhoomi pujan'.

Modi reached Ayodhya via Lucknow at around 11:30 am and offered prayers at Hanumangarhi, the seat of Lord Hanuman after which he arrived at the Ram Janmabhoomi makeshift temple. He was seen performing the 'pooja' at Shree Ram Janmabhoomi along with Uttar Pradesh Governor Anandiben Patel and RSS chief Mohan Bhagwat.

Here are the top quotes from his speech:

- "Like August 15 is our independence day, today's day also holds a similar significance for crores of people who devoted their lives for the cause of Ram temple."

- "See the amazing power of Lord Rama — Buildings were destroyed, there was a lot of effort to eradicate his existence, but Rama still lives in our mind, he is the basis of our culture."

- "After the construction of the grand Ram Temple, not only will the grandeur of Ayodhya increase but the entire economy of the region will also change. New opportunities will be created in every field. People from all over the world will come here, the whole world will come to see Lord Rama and Mother Janaki." 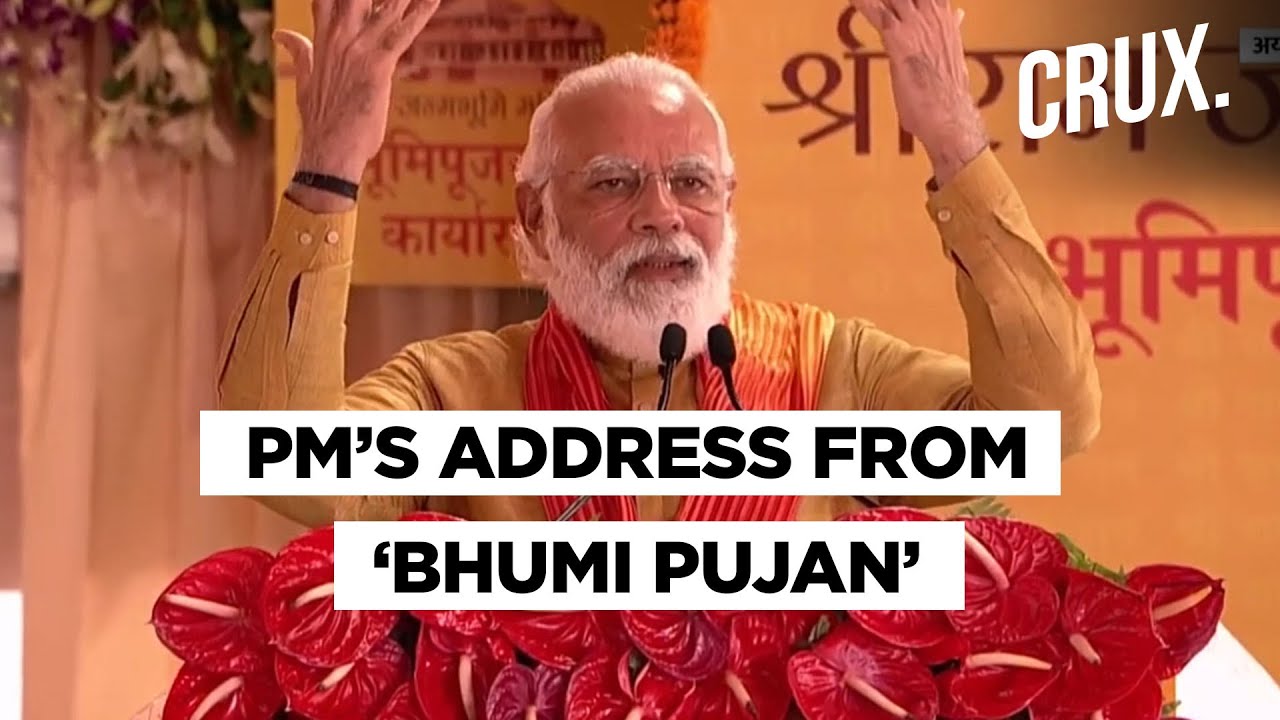 - "Ram Mandir will become the modern symbol of our traditions. It'll become a symbol of our devotion, our national sentiment. This temple will also symbolise the power of collective resolution of crores of people. It will keep inspiring future generations."

- "A grand temple will now be built for our Ram Lalla who had been staying in a tent. Today Ram Janmabhoomi breaks free from the cycle of breaking and getting built again - that had been going on for centuries."

- "Even today, there are dozens of countries outside India, where Ramkatha is still prevalent in its language I believe that today even in these countries, crores of people will have a very pleasant feeling with the start of construction of Ram temple."

- "With the construction of the grand Ram Temple, not only history is being made, but is being repeated. The way how boatmen and tribals helped Lord Rama, the way children helped Lord Krishna lift Govardhan mountain, similarly, with everyone's efforts, temple construction will be completed."

- "This day is proof of the truth of the resolve of crores of devotees. This day is a unique gift of a just, fair India to truth, non-violence, faith and sacrifice."

- "Shri Ram made social harmony the cornerstone of his rule. He learned from Guru Vashistha, love from the Khewat, motherhood from Shabari, cooperation from Hanumanji and his Vanvasi brethren. He gained the trust of his subjects. He even accepted the importance of a squirrel."

- "Jai Siya Ram! This call is resonating not only in the city of Lord Rama but throughout the world today. I express gratitude to all citizens of this nation, Indian diaspora across the world and all the devotees of Lord Rama on today's pious occasion."