It is not the first time when Kashmiris are facing such violence. What is far more common is the differential treatment meted out to Kashmiris who choose to study or work in other states.

New Delhi: Just when the Prime Minister and chief ministers of all states, except two absentees, were discussing the future of India at a NITI Aayog meeting on Sunday, Jammu and Kashmir CM Mehbooba Mufti urged everyone to ensure safety of Kashmiri students. “They are like your own children,” said an emotional Mufti, whose plea was seconded by Narendra Modi, who said states should “reach out to Kashmiri students from time to time.”

In a similar appeal on April 21, Union Home Minister Rajnath Singh had said Kashmiris are “equal citizens of India” and advised chief ministers to ensure safety of Kashmiri youths.

In between the two statements, a Kashmiri student at the Birla Institute of Technology and Science (BITS) Pilani, one of India’s top engineering colleges, received threats to his life.

“As I woke up early, I couldn’t believe my eyes for what was written on the door of my room at Malviya Bhawan Hostel. To add to the surprise, I later on found my clothes have also been pasted with some heart-breaking slogans. I wonder why such animosity for the Kashmiris,” Hashim Sofi, a research fellow at Science and Engineering Research Board, wrote in a Facebook post. 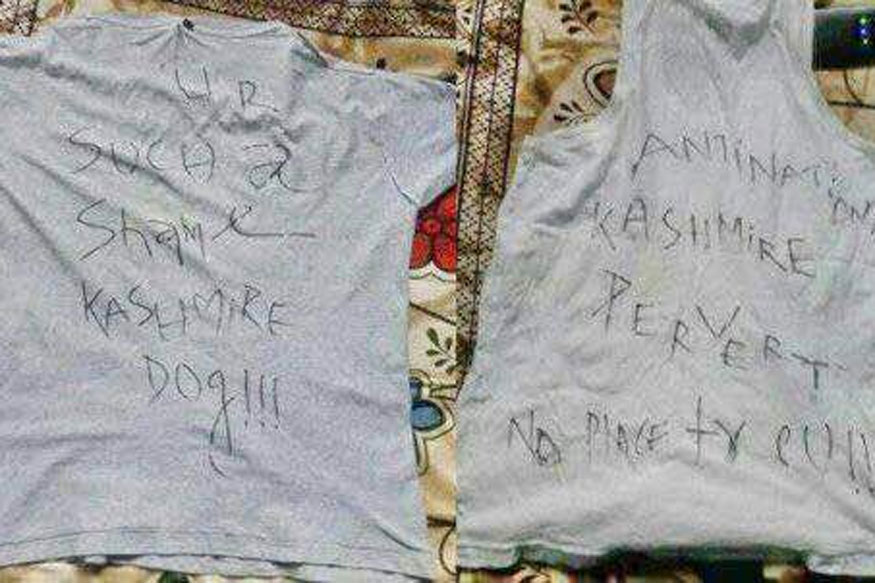 Sofi told News18 on Sunday that he was moving out of the institute as his family was scared for his life. “I reported the matter to my warden and guide. They were very sad, they had been supporting me... but I could not reconcile with the threats,” he said.

This came after a series of recent attacks on young Kashmiris in various parts of India, including the one in Chittorgarh, Rajasthan, where eight Kashmiri students were assaulted near Mewar University on April 19.

It is not the first time when Kashmiris are facing such violence. What is far more common is the differential treatment meted out to Kashmiris who choose to study or work in other states. Every time there is unrest in the Valley, one or another Kashmiri student, who is trying to escape violence and focus on education, faces discrimination and hate. At times, something as simple as an India-Pakistan match or a discussion over mutton and beef can land them in trouble. While on one hand efforts are being made to include Kashmiris in the mainstream, on the other, those who are volunteering to be part of it are being pushed back and alienated.

“My friends and I had gone to buy groceries. A group of local men stopped us and asked if we were Kashmiris. When we said yes, the hooligans started abusing and blaming us for the recent video in which CRPF jawans were seen being harassed in Srinagar. The abuses soon turned into violent assault,” said Faisal, who is from Bandipura in Kashmir.

In December last year, soon after Burhan Wani, a 22-year-old Hizbul Mujahideen commander, was killed by armed forces, a group of Right-wing activists attacked Kashmiri students at Combined Institute of Medical Sciences & Research (CIMS) in Dehradun. “There was this one self-proclaimed nationalist who used to harass and abuse us. He thought it was right to target us for protests in the Valley after Burhan Wani’s death. We complained to the police and he was detained. Just when we thought we could live peacefully, a mob of Right-wing activists attacked our hostel and thrashed us. We have no other option but to live in fear,” said a CIMS student on condition of anonymity.

Saifu Rather from Ganderbal in Kashmir is studying in Delhi to be a chartered accountant. He recalls a 2009 incident which taught him that engaging in a freewheeling discussion can expose biases. “I didn’t face any physical violence. I was a student but also used to work in a BPO. One day, it so happened that the conversation about Kashmir turned into a political debate. After that, there was a visible change in people’s attitude.”

Muhammad Daniyal Ubaidullah, now a Delhi University student, talks about how he was attacked in school when India lost to Pakistan in a cricket match. “Mine was an elite school in West Delhi. Once, our entire hostel was watching an India-Pakistan match. India lost that match and I was blamed for it. I was beaten up by the same people in hostel whom I used to consider my family away from home. Some friends who tried to stop the violence were also beaten up,” he said.

Most shocking part, he added, was the discrimination of the hostel warden. “The warden blamed me for the incident and forced me to stand outside the hostel gate for most of the night. Years have gone by, but the incident still gives me nightmares,” Ubaidullah added.

Several students expressed fears about frequent questioning and searches by police simply on the basis of their Kashmiri identity. “I have been living in Delhi for close to a decade. Every August 15 and January 26, I leave the city for a few days to escape harassment from police. Four years ago, a constable made me surrender my driving licence ahead of Republic Day. In 2015, cops knocked my door and forced me to take off the Dish TV,” said a 27-year-old student of visual effect and animation at Jamia Millia Islamia University in Delhi.

Another former DU student said after the 2015 terror attack in Gurdaspur, policemen barged into his room in North Campus to “see what was going on”.

“They checked my room and asked for ID proof. I am studying in one of the most reputed universities in India. Give me one reason for barging into my room, and I will oblige. This was for nothing but my Kashmiri identity,” said Adil Bhat, from Anantanag, who now stays in New Friends Colony, an upmarket neighbourhood in South Delhi.

Syed Tajamul Imran, president, All J&K Students Union (AJKSU), said almost every week a case of abuse against Kashmiri students in recorded. “We get at least one case of attack or abuse in a week. Why can’t people just let young Kashmiris live peacefully? In some cases, violence continued till the students left the colleges,” he said.

Even Ladakhis have been at the receiving end of the hate crimes. Nadeem Afroz, a Gurgaon-based law student from Kargil said “muscular nationalists” don’t make the distinction between a Kashmiri and a Ladhaki. “I live in Gurgaon and drive my father’s old car, which has a ‘JK’ registration number. One night, my flatmate and I stepped out to eat at Cyber Hub. A group of drunk men saw my car and asked me if I was from Jammu. When I told them that I am a Ladakhi from Kargil, they became abusive. One of them said everyone in Kargil is a terrorist. I and my friend rushed out quickly fearing assault,” he said.

When asked, Nayeem Showkat, a scholar at Aligarh Muslim University, said the discrimination is not limited to Kashmiri students. “Even if you are a businessman from Kashmir, you will be looked at from a certain point of view. The tag of being a kashmiri stays with you.”

Aamir Wani, a poet and photographer from Kashmir, said the so called alienation of the valley played a huge part in these attacks on Kashmiris.

“There is so much of talk on how the Valley should be treated… These conversations trickle down to Kashmiris living outside their homes. There are not many intelligent conversations that happen over coffee with regards to the Valley and those from it,” said Wani.

And then there are those like Afroz who says he tries to remember only positive experiences to overcome fear and hate. “When some attacks on Kashmiris were reported in parts of Haryana, a local police officer called me to ask if I was facing any problem. Even though I have had more negative experiences than the positive ones, it is people like these who make my faith in India stronger,” he said.

Syed Asim Ali, an Aligarh-based independent researcher, said the home minister’s words brought some relief, but only superficially. “All that I can do is trust his words,” said Ali.
Tags