Home » News » India » 'Even Children Were Not Spared': Students Recount Mob Attack, Arson that Burnt Down Their Seminary
3-MIN READ

'Even Children Were Not Spared': Students Recount Mob Attack, Arson that Burnt Down Their Seminary

Charred remains of blankets and floor mats inside a room. (Photo: Eram Agha)

Mohammad Anas, who was inside when the attack occurred and witnessed the violence, wonders why his place of learning was burnt down.

Rakhi Bose
Eram Agha
New Delhi: Mohammad Anas, 12, stood out in his white kurta and skull cap inside the dark and sooty Jamiat-Ul-Huda Madrasa, which is charred beyond recognition.

“We study here, why did the mob attack us?” he asked, taking us around the madrasa situated in the riot-hit locality of Mustafabad in northeast Delhi.

This madrasa is inside the Faruqiya Jama Masjid from where muezzin Jalaluddin gave a call for prayers and was attacked on the night of February 25 before being taken to the hospital. No one from Jalaluddin’s family was around him as he lost touch with them.

On Wednesday morning, Jalaluddin woke up at the Lok Nayak Jai Prakash Narayan (LNJP) Hospital with two more men lying injured on beds flanking his, but no one of his own to listen to his pain and attend to his needs.

Two days after the attack on the mosque and the madrasa located on its compound, Anas can be seen jostling among the older locals, trying to make himself heard. He was inside the mosque when unidentified men barged in and assaulted Jalaluddin, the Imam and others.

“I was there with 30 more children of the madrasa, we were very scared and didn’t know what to do. The men came in and we saw them beating muezzin sahib and the Imam,” said Anas. “We switched off the lights and watched silently. We didn’t speak, just said our prayers… humne dekha ki Imam sahib ko maara (we saw the Imam beaten up).”

While Jalaluddin recovers away from his family, locals at the mosque guard his blood that splattered on the floor, not letting anyone step on them.

“Don’t step on the muezzin’s blood,” said Mohammad Ali, an older member of the mosque committee, checking anyone who enters the mosque for a recce of the riot-hit region.

There is suspicion and disappointment in the air: “even children of the madrasa were not spared,” said locals.

Anas walked around and showed the charred seminary building to outsiders – pointing at the soot on walls, the smoke that still hung in the air, the dark rooms. 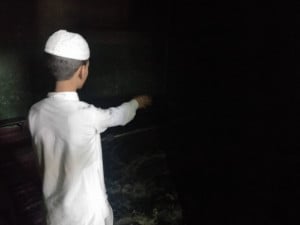 “This is where we studied and sat on the floor to relax, but now the mats are burnt and the walls are dark, we have nowhere to go to for lessons,” he said. The room contained burnt prayer mats, almirahs and windows that open on to the protest site set up by local women against the Citizenship Amendment Act (CAA).

“See, here we read our Quran and learnt other lessons. We also had a computer, but now nothing is left,” said Anas. “We only study here and Imam sahib calls us for prayers; what wrong can happen that we lose that space to learn?’

Some of the children ran away when the “police came in”, while some “hid in the room of the mosque”.

Rizwan, a 22-year-old who joined Anas as he showed us around the mosque, was also present when the mosque and madrasa were attacked. “We were praying in the evening when the first attack took place. I was offering namaz inside and a mob of 30-40 men came in with lathis,” said Rizwan.

The imam instantly locked the main gate, but it was of no use. At least 40 children, including Anas and Rizwan, were present inside the premises. Members of the mosque management committee started to evacuate those stuck inside.

“Some children were downstairs, while some ran upstairs. I went upstairs with them and locked them,” said Rizwan. “First I thought I would lock myself in, but then decided to exit through the back door. I ran away.”

There was another attack at midnight when the mosque was empty. “They had already torched the office and the computer lab for children. The mob went upstairs and burnt the room meant for children,” said Rizwan.

Anas has no idea where his other friends are. “Some were taken by their parents, while others are missing. I have not seen some of them around, I hope they are fine and soon return,” he said.
Authors : Rakhi Bose& Eram Agha
Tags