Home » News » India » Faces in the Farmers' Protest: One Got Trafficked Into Flesh Trade, Others Solemnly Await Compensation
4-MIN READ

Faces in the Farmers' Protest: One Got Trafficked Into Flesh Trade, Others Solemnly Await Compensation

Farmers affiliated to over 180 organisations participate in an open parliament to voice grievances under the banner of AIKSCC.

"I was left with very few options to feed my family. I started working at a brick manufacturing factory. I was soon abducted and taken into flesh trade. After reaching Bhiwandi, it was very difficult to leave the prostitution racket," said Anantpur Zilla's Rama Devi.

Debayan Roy
New Delhi: Rama Devi, who is now in her early thirties, hardly smiles. Her face bears testimony to the hardships suffered after her land was taken by the government for a "development project".

A landless labourer hailing from Anantpur Zilla in Andhra Pradesh, Rama hardly recalls herself as a farmer but is persistent that the government lends an ear to her demands.

"After my land was taken away, I was left with very few options to feed my family. I started working at a brick manufacturing factory. I was soon abducted and taken into flesh trade. After reaching Bhiwandi, it was very difficult to leave the prostitution racket. After about three years, I was rescued by an NGO," said Rama, who feels that if she had been given a fair compensation, the trauma she faced could have been avoided. Farmers like her sat silently in the corner, while thousands gathered in Delhi's Sansad Marg demanding fair prices from the government. The protest, which saw bills being discussed to ease the pain of agricultural workers, had many who could hardly hear the fiery speeches and merely nodded.

Rama was not alone. Aradhna, a member from the Kisan Sangharsh Samiti too voiced the need to recognise “women farmers”. After losing everything to a dam constructed by the government, she still awaits justice.

"There is no right that can be claimed by a female. Our village was submerged after the construction of a dam in Andhra Pradesh but only our husbands got land rights. It was of no use to us, as they passed away. Land register deeds need to be in the name of females. Most of the men waste the compensation away in liquor. Even private businessmen are playing a pivotal role in depriving us of our rights," said Aradhna.

A point of note in the protest, though, was a wall with the innumerable pictures of farmers who had committed suicide after not being able to cope with crop failures or the pressure of loan sharks. 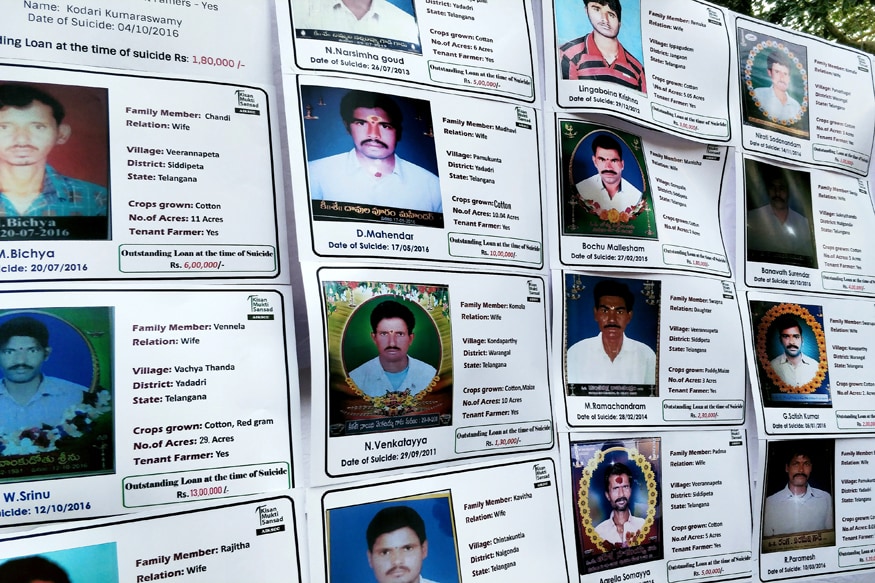 The wall of suicide at the protest site

Tarlem Singh, a farmer from Bareilly in Uttar Pradesh, sat quietly under a picture. Having lost two of his brother in the past six months, Singh complained about how sugarcane production in his belt had been severely affected after years of government apathy.

"We are drowned in debt. All our sugarcane production is a waste, there is no measurement taking place. In 2010, there was a discussion to implement the Swaminathan Commission report but it is still pending. The Minimum Selling Price (MSP) for grain is around Rs 1550 – Rs 1590 per kilo but they pay us only Rs 1000. Yogi Adityanath’s government said loans would be waived off but no such thing has happened. Some people did get a waiver but only up to a few hundred rupees," said Singh.

The Bareilly resident also added that “almost 20 to 25 farmers commit suicide every day in India but no one cares". According to Singh, "Middlemen exploit them and some of the purchasers too deferred their payments. Furthermore, the banks have not stopped charging interest on loans."

Singh wasn’t the only one who felt burdened by government policies, others have also blamed the increasing industrialisation and commercialisation of their problems.

Charanjeet Kaur reminisces the time when homes used to be abundant with agricultural produce and farm animals but now only "graveyards run between homes".

"Companies and commercialisation have taken their toll. The government wanted us to become dependent on machinery but the sole benefits went to tractor companies. They gave us many loans to buy these machines and we are now completely burdened with debts. Companies gradually started taking calls in our production," said Kaur.

She further added that the owner cultivation class should get the benefit when profits and incentives are being devised for farmers, while, poor farmers should be given free machinery.

As a leader of the protestors took over the podium and started naming 35 farmers who committed suicide and their families await compensation, another farmer narrated her grim tale.

Khadija Muhammad, a fisherwoman from the Sabarkantha district in Gujarat, said, “Most of our lands were taken away for laying down electricity lines. No one asked for our permission. We recently witnessed floods but are still awaiting compensation for the destroyed crops. Our area has no local market and hence farmers have to depend on middlemen, who pay us shockingly low rates.” Sanobar Mansoori, who wishes to expose the 'farmers' insurance scam'

Similar issues were also highlighted by Sanobar Mansoori, a farmer from Madhya Pradesh, who sought to expose the "farmers’ insurance scam".

"We are being forced to take up crop insurance when we don't even have money for food. If our crops get destroyed, although we have a farmer credit card to show (the proof of enrolment for insurance), we don’t get compensation. Furthermore, the government only gives us Rs 100 or Rs 200. If we are not extended our rights, we will snatch them,” said Mansoori.

Comrade Balbir Singh, a farmer from Haryana and the leader of All India Kisan Suraksha Sangathan, said, "Till now, crores of rupees have been taken by the insurance companies but the farmers are yet to receive even a single paisa.”
Tags