Farmers’ Protests LIVE Updates: Squatting on a railway track in Punjab's Amritsar as part of their ‘rail roko’ protest, a group of farmers affiliated with the Kisan Mazdoor Sangharsh Committee went shirtless in protest against the three agri-marketing bills passed recently by Parliament. Sitting on the rail track, the bare-chested protesters shouted slogans against the BJP-led central government and demanded that the farm bills be withdrawn. In Uttar Pradesh, 70 RLD workers and leaders, including its district president, were booked in Muzaffarnagar for holding a protest against the farm bills without permission.

The Congress, meanwhile, launched a 'Speak up for farmers' campaign on social media, with Rahul Gandhi urging people to raise their voice against what he described was the Narendra Modi government's "exploitation" of farmers.

Rahul Gandhi Urges People to Raise Voice in Support of Farmers | The Congress launched a 'Speak up for farmers' campaign on social media protesting the farm bills, with Rahul Gandhi urging people to raise their voice against what he described was the Narendra Modi government's "exploitation" of farmers.  The three bills were passed by both houses of Parliament during the Monsoon session and are awaiting presidential assent. 70 RLD Workers Booked for Holding Demonstration Without Permission |  Seventy RLD workers and leaders, including its district president, were booked for holding a protest against new farm bills without permission from the administration, police said. RLD's district president Ajit Rathi, party spokesman Abhishek Choudhry and former MLC Choudhry Mushtaq are among the 70 people who have been booked under Section 188 of the IPC, SHO DK Tyagi said.

Farmers Protest Bare-chested in Amritsar Against Agri Bills | A group of farmers, who squatted on a railway track in Punjab's Amritsar, went shirtless on in protest against the three agri-marketing bills passed recently by the Parliament. Sitting on the rail track, the bare-chested protesters shouted slogans against the BJP-led central government and demanded that the farm bills be withdrawn. Farm Bills Anti-farmer: Jharkhand CM | Jharkhand Chief Minister Hemant Soren termed the farm bills, which were recently passed by Parliament, as "anti-farmer" and said they were the "biggest attack" on the federal structure of the country. These bills will only benefit companies and traders, Soren, who was accompanied by state agriculture minister Alamgir Alam, told reporters. 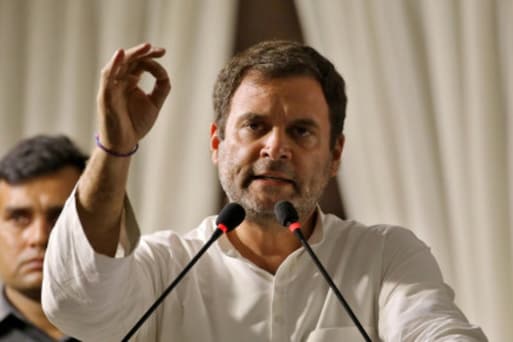 Gandhi talked to some farmers through video conferencing and said they have no faith in the government, adding the country together opposes these agri-related laws.

Farmers' Body in Punjab Extends 'Rail Roko' Agitation Against Farm Bills Till September 29 | The Kisan Mazdoor Sangharsh Committee announced extending its ‘rail roko’ agitation in Punjab against three farm Bills till September 29. The three-day agitation was scheduled to end on September 26. “We have decided to extend our agitation till September 29. We want the government to resolve the issue of farm Bills,” committee president Satnam Singh Pannu said over the phone. The ‘rail roko’ agitation had started on Thursday, forcing the railway authorities to suspend the operation of special passenger trains in the state.

Farmers Hold Protest in Panchkula | Farmers of Panchkula district carried out sit-in protests and tractor rallies across Kalka, Pinjore, Raipurrani and Barwala.Bharatiya Kisan Union (BKU) state president Guram Singh reached Pinjore to address the farmers of the district.“The Centre wants to break the mandi system and abolish the minimum support price (MSP) via these Bills. The farmers of Bihar do not get the benefit of MSP and this is what the Centre wants to do to the farmers of Punjab and Haryana as well. These Bills will destroy us," he told Indian Express. Farmers in various parts of the country raised slogans, took out processions and caused road and rail blockades as part of the Bharat bandh call given by several unions to voice dissent against the…

Why Are Farmers Protesting? Farmers led by various Farmers' Association held protest across the country demanding that three farm reforms should not be signed into law by President Ram Nath Kovind. The three bills are- Farmer's Produce Trade and Commerce (Promotion and Facilitation) Bill, 2020, the Farmers (Empowerment and Protection) Agreement of Price Assurance and Farm Services Bill, 2020 and the Essential Commodities (Amendment) Bill, 2020, now await presidential assent. Farmers believe that the new reforms would dismantle the Minimum Support Price mechanism, making them dependent on 'big corporates'. 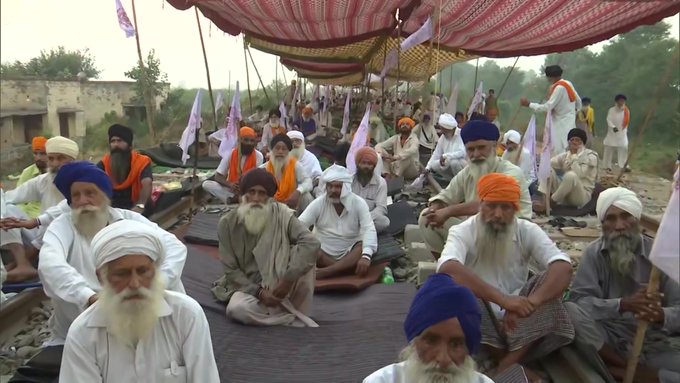 Members of various farmers' organisations block a railway track during a protest against three farm bills, in Rupnagar district of Punjab, on September 25, 2020. (PTI Photo)

The agriculture reform bills, passed amid protests by the Opposition and BJP ally Akali Dal in Parliament this week, have triggered an India-wide resentment among farmers who fear the new legislation will do away with the Minimum Support Price (MSP).

Since yesterday, farmers have shouted slogans and blocked roads in several parts of the country, protesting against the three agri-marketing bills. The most widespread protests were in Punjab and Haryana, but demonstrations were also reported from Uttar Pradesh, West Bengal, Kerala and Karnataka as part of the Bharat bandh call given by several farmer unions.

Over 30 organisations had given a separate Punjab bandh call, leading to farmers blocking roads and traders shutting shops and vegetable markets for the day. The bandh in the state appeared to be near total. Hundreds of farmers -- on foot, two-wheelers and tractor-trolleys -- were stopped at Delhi's border with Uttar Pradesh as they tried to press ahead into the national capital, their agitation disrupting traffic in Noida and Ghaziabad.

Stopped from entering the city, the farmers staged 'panchayats' at the road blockades where they were addressed by Bhartiya Kisan Union office-bearers. Addressing BJP leaders and workers on the birth anniversary of party's ideologue Deendayal Upadhyay, Prime Minister Narendra Modi again made a pitch for the new laws meant to deregulate the sale of farm produce.

But farmer unions and opposition parties say they will lead to the dismantling of the minimum support price (MSP) system. In West Bengal, farmer bodies loyal to the Left parties staged protests.

CPI(M) farmers' wing 'Sara Bharat Krishak Sabha' and those of other left partners such as CPI, Forward Bloc and RSP took out rallies in Hooghly, Murshidabad, North 24 Parganas, Bankura and Nadia. In Karnataka, there were demonstrations across the state and many farmers arrived in capital Bengaluru to take part in protests against amendments to the Agricultural Produce Marketing Committee Act and the Karnataka Land Reforms Act.

Farmers under the umbrella of the All India Kisan Sabha (AIKS) staged protests in Kerala, including outside the Raj Bhavan in capital Thiruvananthapuram. In Punjab's Barnala, a tractor was set on fire by protesters.

Punjab farmers blocked the Sangrur-Patiala, Chandigarh-Bathinda and Ambala-Rajpura-Ludhiana and Moga-Ferozepur roads, triggering traffic diversions and hardship to commuters. Buses run by the state-owned Pepsu Road Transport also went off the roads in Punjab.

Shiromani Akali Dal chief Sukhbir Singh Badal drove a tractor while his wife and former Union minister Harsimrat Kaur Badal sat beside him in Muktsar district. He led a tractor march from his Badal village to Lambi, where the party had organised a protest against the bills. At several other places, party workers blocked roads.

Prominent Punjabi singers like Harbhajan Mann and Ranjit Bawa took part in a farmers' protest in Nabha. A three-day rail roko that began Thursday is also underway in Punjab, with farmers squatting on the tracks at many places in Punjab and the railways suspending many trains.

The Kisan Mazdoor Sangharsh Committee on Friday announced its extension by another three days. Buses run by state owned Pepsu Road Transport Corporation also remained off the roads on Friday. In neighbouring Haryana, farmers blocked the Karnal-Meerut, Rohtak-Jhajjar and Delhi-Hisar and other roads.

Apart from Noida and Ghaziabad which border New Delhi, there were scattered farmer protests in western Uttar Pradesh and in districts like Deoria, Kushinagar and Maharajganj districts. The Samajwadi Party said its workers held protests in all UP districts, submitting memorandums addressed to the Governor to the district magistrates.