On Father's Day, Google Doodle illustrated the filial love that the world's dads shower upon their children throughout their life.

A screen grab of the Sunday's doodle.

Father’s Day 2019 | Google honoured the world’s dads on the occasion of Father’s Day on Sunday with three animated slides, illustrating the filial love that they shower upon their children in an endearing doodle. Father’s Day is celebrated on the third Sunday of June every year in the United States and several other countries including India to honor the dads.

In the three slides, a grey coloured father duck looks after and plays with his six ducklings, two blue, two red, one yellow and one green. While the first slide shows the father duck haplessly watching his ducklings creating a ruckus, one even jumping on his head, the following slide shows the father playing hide and seek with his tiny ducklings. The third slide shows him blowing bubbles at them, which engulfed the babies making them rise in the air, only to pop later and make them fall down. 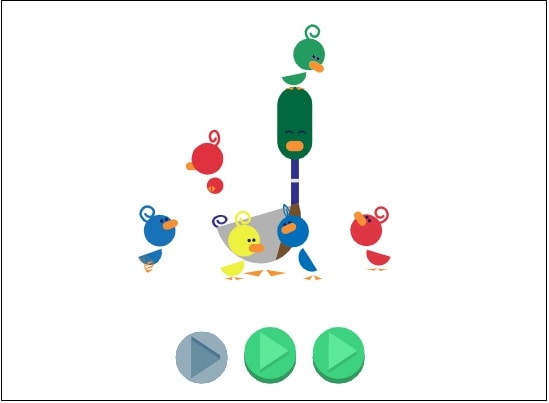 The adorable doodle harps on the simple fact that fathers protect their children, guide them as they fall and are always there to lift the little ones’ spirits up. Basically, Sunday's doodle exhibits that our fathers always have our back notwithstanding the situation.

The search giant has a history of posting interesting doodles marking various occasions of significance and popularity.

Although the day is celebrated in Europe on March 19 (Saint Joseph's Day) since the Middle Ages, its modern-day origins can be traced back to the relentless efforts of a woman more than 100 years ago in the United States.

In 1909, Sonora Smart Dodd was listening to a sermon about Mother’s Day at a church in Washington, when she began wondering why dads didn’t have a special day dedicated to them. She worked “tirelessly with the local clergy and got the YWCA (Young Women Christian Association) on board, and they had their first Father’s Day in Spokane in 1910,” her granddaughter Betsy Roddy told the Associated Press in 2017.

After decades of campaigning for an officially-recognized Father’s Day in the United States, Sonora’s efforts finally paid off after President Lyndon B. Johnson, in 1966, issued the first presidential proclamation designating the third Sunday of June as Father's Day. Father’s Day became a permanent federal holiday in the United States when President Richard Nixon signed it into law in 1972.