Asha Damor left studies and is working with her father at a farm 60 km from her village. (Image Mayank Meliwar)

Aged 11 to 18, five girls from the Damor family in Madhya Pradesh’s Jhabua district, who all used to go to school earlier, have had to find jobs since the pandemic began

In March 2020, before the pandemic shut down schools, Asha Damor had been studying in Class 7 in Dhumadiya village in Madhya Pradesh’s Jhabua district. Lockdown-induced economic distress forced her father, Nansingh Damor, to take out loans to sustain the family and soon enough Asha found herself working at a farm 60 km from her village. And, as per new government directives, she has been promoted to Class 8 without ever having glanced upon a textbook or attending a single online class.

Under the state government’s DigiLEP initiative, government school teachers have been sharing study materials and videos with students on WhatsApp groups in order to continue imparting some form of learning to students during the lockdown. This is of no use to Asha as the family does not own a smartphone. This is the case for many students in her neighbourhood and her village.

Asha and her younger sister, Nandini (11), are new to the life of labour but for the past several months, this has been Asha’s life. Initially, Damor accompanied his daughters to Badnawar, the nearest city, to work on a garlic farm. “In the beginning, I worked for around two months in the garlic farm. We used to work from 8:30 in the morning till six in the evening,” she said. For this, she was paid Rs 200 a day and given a small room to stay in the field. “We took our own food from the village, like wheat flour, pulses etc. and used to cook on an earthen stove with wood fetched from the nearby forest,” Asha said.

The family belongs to the Bhil Adivasi community, a Scheduled Tribe. According to the 2011 census, Scheduled Tribes in the Jhabua district constitute nearly 86% of the total population with a 35% literacy rate in rural parts. Damor and his wife, Kamala, themselves did not receive basic education — the former has studied till class 5 and Kamala has only attended one year of school in her lifetime. The couple had given birth to six girls of which the youngest has been adopted by Damor’s elder brother.

The family owns a little farm in the village and every year after harvest, the couple used to migrate looking for work on other farms. “To manage all the expenses, I also joined my husband to work outside,” Kamala said. 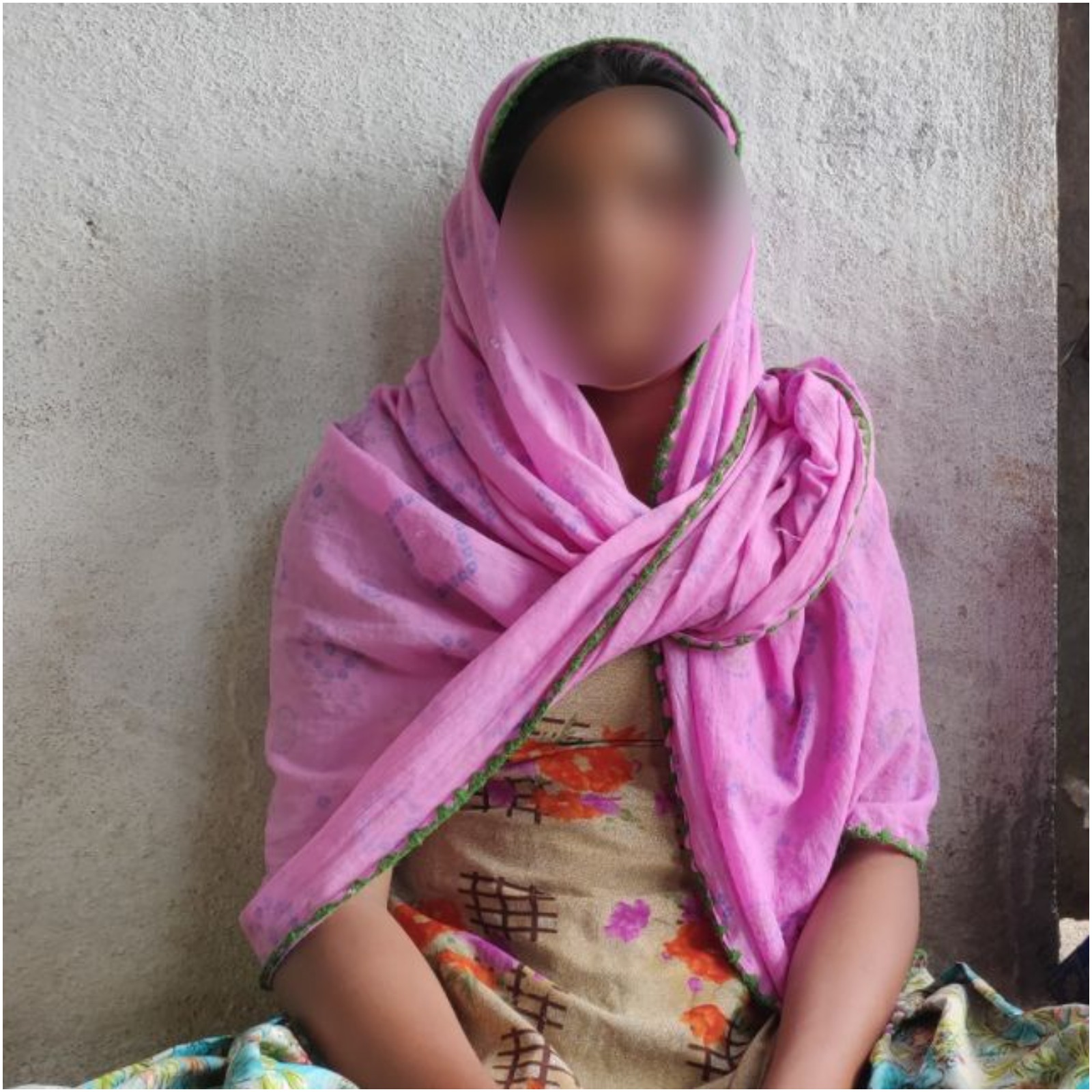 Asha Damor left studies and is working with her father at a farm 60 km from her village. (Image Mayank Meliwar)

“Prior to the lockdown all five girls used to go to school; we never compromised on schooling,” said Kamala, indicating that if schools were opened they would not have sent the girls to work outside. But their house is under construction and they have a lot of debt, she said, adding that “now both Asha and Nandini have grown up”.

“Ghar mein padhai ho nahi rahi hai, isliye 200 ke peeche jaa rahe hai; 200 mil gaye to ho gayi naukri, kitabon ko toh dekha he nahi (There is no studying happening at home. That’s why they are going after the Rs 200. They haven’t looked at their books at all),” Asha’s aunt, Radha Damor said.

According to the Madhya Pradesh Commission for Protection of Child Rights (MPCPCR), nearly 40,000 children between Classes 1 and 12 dropped out of school in four tribal districts of the state after the devastating second wave of Covid.

“The state of affairs in the other districts of MP will be far worse. It is so sad. We are trying to encourage parents to enroll their kids back into school but the financial condition of the lower-middle class and middle-class in India has worsened since the pandemic began,” pointed out Brijesh Chouhan, member of MPCPCR. “When so many homes are dependent on NGOs for daily ration, how will parents pay the school fees and buy books?” he asked.

In May, when the girls started working at a road construction site in Kajliya village, near Chitordi Rundi, their sister Manisha (12) joined them. The three sisters were among the 15-20 other girls who were working alongside other laborers from Dhumadiya and other nearby villages. They were recruited by the Bamaniya Panchayat to work at the site and were promised Rs 197 a day. “They came to our village looking for labourers. We worked for a whole month but did not receive any payment. However, the other labourers’ payments have been deposited into their bank accounts,” Manisha said.

Benedict Damor, secretary of Adivasi Chetna Shikshan Seva Samiti, a non-profit working to empower tribal students in Jhabua district, said: “With schools closed during the lockdown, student’s education has been affected severely. Most of them joined their parents to work outside, migrating to Gujarat and Rajasthan to help sustain a living.”

“The practice of Bal Shram (child labour) is very common in the district. You will find children below the age of 14 working at hotels and various other places. We cannot complain as they are looking after their families with those earnings; they don’t have other options,” he said.

Even before that pandemic, many children here used to drop out of school to accompany their migrating parents. This trend has now intensified. “Many daily labourers have migrated to Rajasthan and Gujarat as they make around Rs 400-500 per day working in a factory, as compared to the Rs 190 per day in MP with the MGNREGA. When the parents migrate, the children also have to go, and so they drop out of school. Around 10,500 students of the 40,000 we could trace migrated with their parents during the second wave of the pandemic,” said MPCPCR’s Chouhan.

Some continue the legacy and migrate on their own as well. In January next year, Lalita, Asha’s sister who is not sure of her age (“I might be between 16 and 18”), will be married to Dinesh Amra who belongs to the same village. Until then, Lalita, who had been studying class 5, has joined a dozen other girls from the village who have gone to Gujarat to work at a construction site. She accompanied them to Vadodara in March this year after the contractor (thekedar) canvassed the village for workers, promising around Rs 300 a day for women and Rs 350 for men. It’s now unlikely that she will complete her education.

As the school dropout rate is very high in tribal districts of MP, namely Alirajpur, Dhar, Jhabua and Betul, the MPCPCR has written to the tribal welfare department to upgrade hostel facilities to ensure that children can stay back and study if their parents migrate to other states.

“We suspect the situation in other tribal districts like Mandla, Chhindwara and Dindori is similar to these four districts and we have written to the education, labour and tribal welfare department to make arrangements for students to continue their education,” said Chouhan.

(With inputs by Shuchita Jha)

(The author is a Jhabua-based freelance journalist and a member of 101Reporters, a pan-India network of grassroots reporters.)