Kerala’s Model of containment of the Covid-19 pandemic was hailed not only in India but all over the world. After reporting the country’s first case on January 30, when a student returning from Wuhan tested positive in the Thrissur district, the state authorities, through a slew of measures that included innovative contact-tracing and isolation, strict policing and a robust local public healthcare system, flattened the curve by early May. However, the government started to ease restrictions and open up certain sectors from mid-May in order to revive the economy. In addition, non-resident Keralites started returning home from May 7 on repatriation flights from the Gulf. By the third week of July, about half a million had made their way back from within India and abroad.

As a result, there was a spike in cases from May 20. The national lockdown was also lifted on the 31st. The easing of curbs led to some laxity and social distancing norms were violated.

The number of daily cases started to rise and crossed 100 for the first time on the 5th of June. The gradient has been steep over the last month. 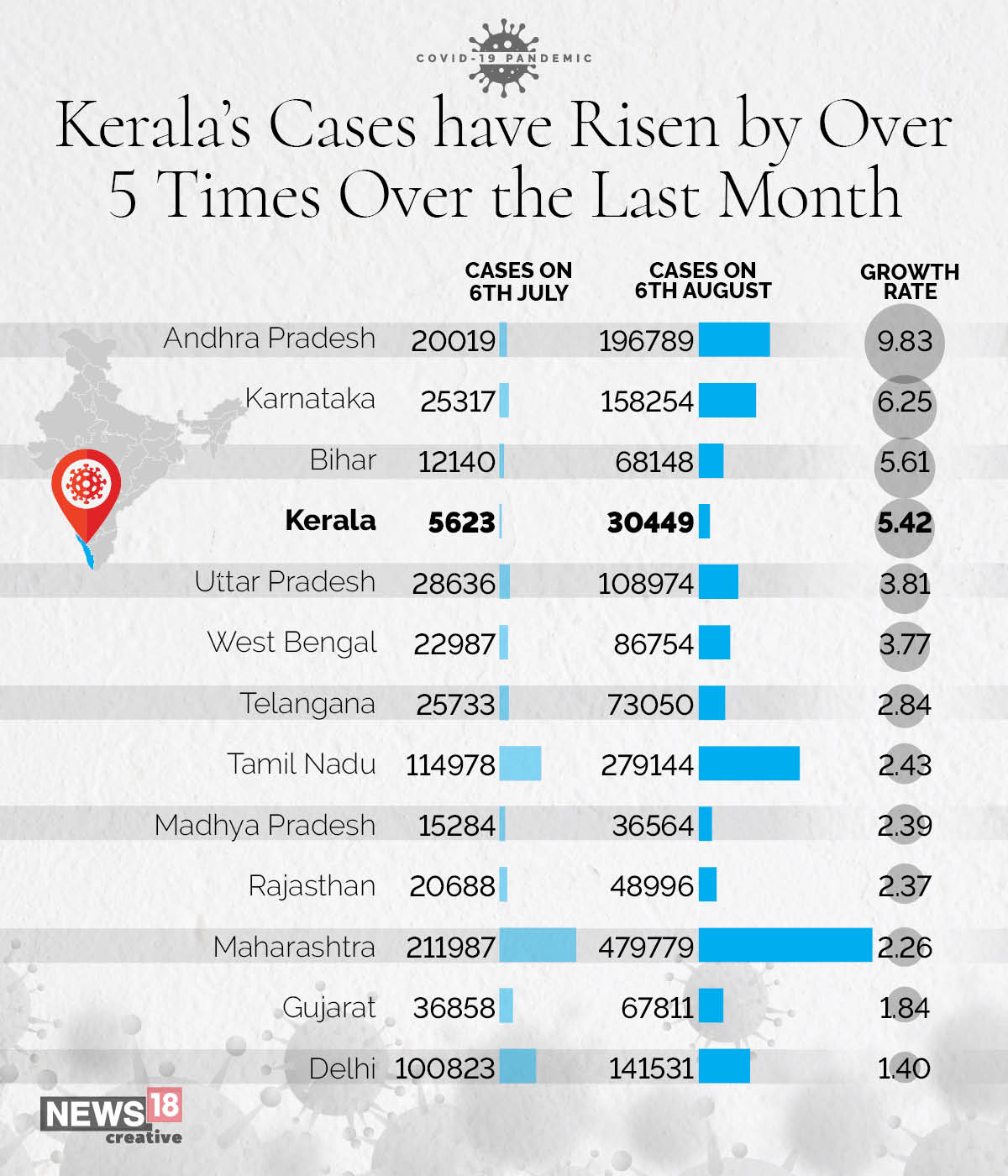 Although Kerala has the lowest number of cumulative Covid-19 cases among the major states of India, its cases have increased by over five times from the July 6 and its growth over the last month is the fourth-highest only after Andhra Pradesh, Karnataka and Bihar. The capital of the state, Thiruvananthapuram, has borne the worst of the second wave in Kerala with cases rising by more than 20 times over the last month. The coastal regions have been severely affected with Poonthura and Pulluvila witnessing community spread.

Thiruvananthapuram has averaged 225 daily cases for the last couple of weeks with a high of 377 on August 2. It went into a triple lockdown on July 6 – a strategy which was successfully implemented in the hotspot Kasargod district in April. It basically means that the police will monitor and intervene at three different levels to control the community spread in the district.

Even as the cases rise, there are two big positives for Kerala – their low Positivity Rate and Mortality Rate.

Most importantly, Kerala has done a remarkable job in keep the mortality numbers low. A total of just 98 Covid-19 deaths have been reported from the state – the lowest among all the major states in India.

Kerala had reported a total of just 4 deaths till the 24th of April. There were no deaths between the 25th of April and the 21st of May. Although, there have been 70 lives lost due to Covid-19 during the last month, the Mortality Rate in this period is just 0.28%.

Overall, Kerala has the lowest Mortality Rate of 0.3% among major states in the country.

The next couple of weeks will be crucial for Kerala. Will the state be able to re-implement its highly successful model of containment or will it go the Karnataka way?