In what raised eyebrows in India, Pakistan army chief Qamar Javed Bajwa was also present at what was essentially a civilian function.

India was represented by Union ministers Harsimrat Kaur Badal and Hardeep Singh Puri at the event. Punjab cabinet minister Navjot Singh Sidhu also attended the ceremony in his personal capacity. While Sidhu was seated closer to Imran Khan and next to Pakistan foreign minister Shah Mehmood Qureshi, Harsimrat and Puri were a few seats away in departure from protocol.

In what raised eyebrows in India, Pakistan army chief Qamar Javed Bajwa was also present at what was essentially a civilian function. In another controversial attendance, Sikh militant and pro-Khalistan leader Gopal Sigh Chawla was also present and seek shaking hands with Bajwa.

Chawla’s name was recently linked by intelligence agencies to the attack on Nirankari Bhawan in Amritsar, in which three people were killed. Officials had said Chawla was in contact with ISI and Lashkar-e-Taiba chief Hafiz Saeed to hatch a terror plot, and agencies had also acquired a photo of a meeting between Chawla and Saeed.

Chawla was also involved in pasting photos of ‘Sikh Referendum 2020’ outside Gurdwaras in Pakistan when Sikh pilgrims from India visited the neighbouring country on Baisakhi. 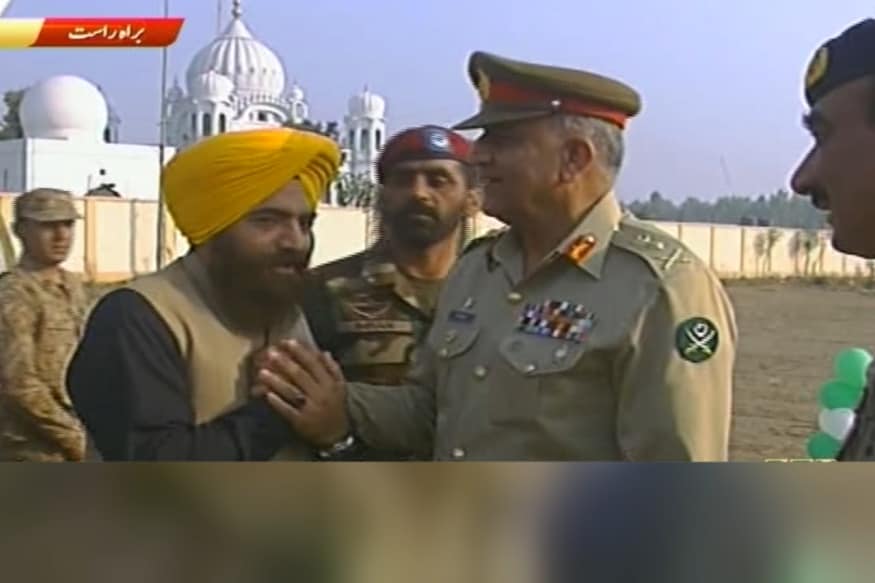 Kartarpur Sahib in Pakistan is located across the river Ravi, about four kilometres from the Dera Baba Nanak shrine. It was established by the Sikh Guru in 1522. The first Gurdwara, Gurdwara Kartarpur Sahib, was built here, where Guru Nanak Dev is said to have died.

The Kartarpur Corridor, which will facilitate the visa-free travel of Indian Sikh pilgrims to Gurdwara Darbar Sahib in Kartarpur, is expected to be completed within six months.

The development comes ahead of Guru Nanak's 550th birth anniversary next year.

Thousands of Sikh devotees from India visit Pakistan every year to celebrate the birth anniversary of Guru Nanak.

India had proposed the corridor to Pakistan around 20 years back.

Last week, Pakistan and India announced that they would develop the corridor on their respective side of the border to help Indian pilgrims visit Gurdwara Darbar Sahib in Kartarpur.

India-Pakistan ties nose-dived in recent years with no bilateral talks taking place. The ties between the two countries had strained after the terror attacks by Pakistan-based groups in 2016.

Pakistan had invited External Affairs Minister Sushma Swaraj, who thanked her Pakistani counterpart Shah Mahmood Qureshi for the invite and said she was unable to travel to Kartarpur Sahib due to prior commitments.

The issue of Kartarpur Sahib came into focus after Punjab Minister Navjot Singh Sidhu visited Pakistan in August to attend the oath-taking ceremony of his cricketer-turned-politician friend Imran Khan as prime minister of that country.

After his return, Sidhu said that Pakistan Army chief Qamar Javed Bajwa had told him that Pakistan may open a corridor to Kartarpur Sahib.