Girls of Deoband: Bringing Faith and the Future a Little Closer

The madrassa town that makes it to headlines mostly for its 'rent-a-fatwa' image is now setting new standards for girls education. This silent revolution that seeks to weld the faith with the future is led by a crop of committed educationists who have turned every crisis into an opportunity. The madrassa town of Deoband that makes it to headlines mostly for its 'rent-a-fatwa' image is now setting new standards for girls’ education. This silent revolution that seeks to weld faith with future is led by a crop of committed educationists who have turned every crisis into an opportunity.

Kulsum Imran, a Class 12 student, wants to become a fashion designer. Her batchmates have assorted, more academically oriented dreams. And all that their radical teacher — radical in the text book sense, not what it has come to be associated with of late — would ask them is not assign limits to their dreams.

Welcome to a new Deoband — the seminary town that’s the favourite punching bag of the saffron fringe — where a silent revolution in girls’ education is changing perceptions and, hopefully, posterity.

Today, if a 16-year-old girl in this town can dream about moving to Ahmedabad to pursue a career in fashion — and more importantly if she can wear that dream on her sleeve — thank a bunch of dedicated educationists who have took on societal suspicions, cultural taboos and plain cynicism by making girls’ education a social project. Students while attending lecture in the class. (Image: Eram Agha/News18.com)

Even though the 150-year-old Darul Uloom attracts Islamic scholars from across the world, till recently, Deoband had a tradition of home schooling for girls where ustaniji, lady tutor, would visit homes and teach girls about Quran and Hadith.

Away from all this is Imran’s school, Islamia Inter College, one of the few places in Deoband where girls and boys can study together. The institution, set up in 1947, had a rich history of educating boys before Shamim Murtaza Farooqui become principal. In 1995, Farooqui opened the gates of the school to girls.

“It didn’t happen without struggle. Objections and allegations both came my way. Ulemas questioned me for teaching boys and girls in same classrooms. On top of that, we were teaching English,” said Farooqui, who carries a cane as a symbol of ‘discipline’. On one hand, enrolment in Farooqui’s school went up from 384 students in 1995 to 3,000 in 2016, and on the other, he still faces protests from the orthodox sections of the community. “Now they have problem with teaching of boys and girls in Classes 11 and 12 of the Science section” he said.

Farooqui’s grit has been tested several times. When his students were constructing classrooms in the school, someone approached a local court and got a stay order. “I was put behind bars for violating the stay order,” he said.

Some people questioned the authenticity of Farooqui’s educational qualification and he had to face a probe. “They suggested I should teach only religious text here… These people have assigned limits to their dreams, I have not,” Farooqui said. No wonder, there are more girls in this institution than boys. And Imran is not the only girl with big dreams in this town. “Our girls have gone to China to study medical science. This is just the beginning,” said Sanjay Sharma, who teaches Hindi in Islamia Inter College. Sharma was quick to boast that all students of the school have passed in the exams conducted by Uttar Pradesh Board of High School and Intermediate Education last year, something even famous schools in Lucknow and Allahabad find hard to achieve.

Nawaz Deobandi, a revered poet from this town, has started a girls’ school focused on imparting scientific education while introducing young minds to Urdu and Islamic culture. In the opening verses of one of his ghazals, Deobandi says: Manzil pe na pahunche use rasta nahi kehte, do-char kadam chalne ko chalna nahi kehte… (A path that doesn’t lead to destination doesn’t deserve a name, just a few steps are not worth a mention…)

Getting a Central Board of Secondary Education (CBSE) affiliation wasn’t as big a challenge for Nawaz Girls Public School as was convincing parents to allow their daughters to wear trousers for physical education classes. “When parents complained, I did not know what to do. Our students wear trousers with long shirts. I convinced them that physical education will fetch their daughters more marks in the Board exams,” said Fozia Nawaz, a teacher.

Even as more parents want modern education for their girls, they also want to protect their culture. To allay such fears, the school teaches Urdu and Islamic education till Class 8. Within three years of its founding, the school has 600 students.

It’s not just schools that are imparting education to girls, the madrassas are also changing. Deoband’s first madrassa for women Ma’had Aaishatus-Siddiqah Qasimul Uloom Lil Banaat follows Darul Uloom-like curriculum. Jawaharlal Nehru University (JNU) has recognised the institution’s Aalima certificate based on which students can seek admission in the central university for graduation courses. “I am pursuing this with other universities in Delhi and Hyderabad. We want our girls to get jobs and be independent,” said Nadeemul Wajidi, patron of the institution.

However, Kulsum Imran and many like her still don’t have many options in Deoband to pursue higher education. “I am not going to stay here for long. After Class 12, I will either go to either Delhi or Ahmedabad to study fashion,” said Imran.

To fulfill dreams of young women like Imran, Public Girls Inter College is now planning to offer graduation and professional courses. Faheem Akhter Siddiqui, a parent who is also working with Muslim Fund Trust that runs the college said, “This will give girls more opportunities. They will not have to compromise on studies. Also, they will not have to leave Deoband against their will.”

Haseeb Siddiqui, general manager of Muslim Fund Trust said women education could change the entire community. “When you educate a woman, you educate a family,” he said.

This passion for women’s education has emerged after reflection and conversations within the community. After the Babri Masjid demolition, Muslims in Darool Uloom were shaken like the rest of India. But not everyone participated in communal frenzy and many chose to heal the wounds of the community in more lasting ways. Muhammad Sufyan Qasmi, deputy rector and lecturer, Darul Uloom Waqf said, “After Babri demolition, we looked for answers within… That is when an organised effort was made to educate our women.” 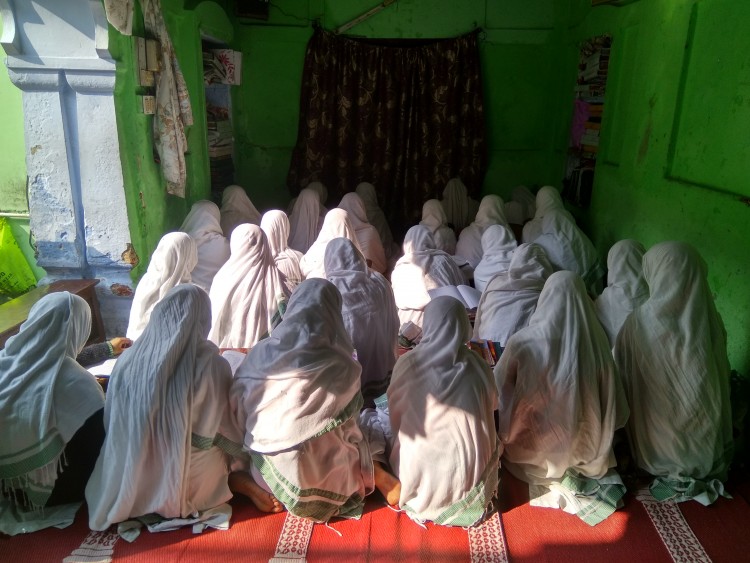 To those who get worried about political rhetoric in election season, poet Nawaz Deobandi says, “India is a country of possibilities. One shouldn’t get disheartened and keep working… and that the community should not only build houses but also schools.”