'Give Credit to the Healers': Mumbai Doctor Sketches Sacrifices of Medical Community Amid Pandemic

One sketch has a healthcare worker at a cross, reminiscent of Jesus Christ, carrying the burden of the world on her shoulders.

A Mumbai-based surgeon says she feels very strongly about the unfair treatment being meted out to the medical community. Each of her sketches paints a story of the duress that healthcare workers are in.

"For the past many months, not a single day has passed when we have not read an obituary about a colleague. It is deeply upsetting and saddening. The least we can do today is to make their sacrifice count and give them their due acknowledgement," says Dr Aparna Govil Bhasker while she creates sketches as a tribute to healthcare workers who have died in the line of duty in the past eight months.

Bhasker, 42, who is a surgeon in Mumbai, says that she feels very strongly about the unfair treatment being meted out to the medical community. "Healthcare in India is rooted in a very weak foundation. Doctors have been carrying this burden on their shoulders for decades. It's high time for this paradigm to change for the better," she says.

Each of her sketches paints a story of the duress that healthcare workers are in. One has a healthcare worker at a cross, reminiscent of Jesus Christ, carrying the burden of the world on her shoulders. The second one shows a distressed healthcare worker being consoled by another. A third has a worker praying. 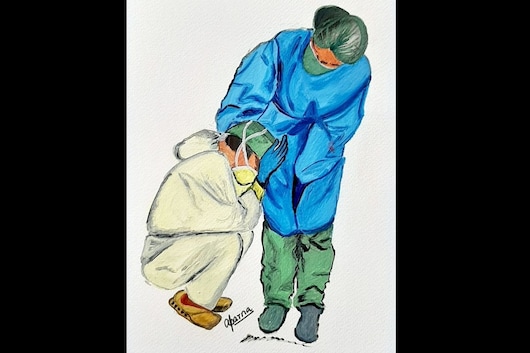 A fourth one has a healthcare worker choosing to spend the night resting her head against a patient's hospital bed. "We are healers in a healthcare system which was already broken and, to give credit where it is due, we have done a great job with the meagre resources that we have. Unfortunately, some very major issues being faced by the healthcare community which are being ignored and not being addressed," says Dr Aparna.

Long working hours, isolation from family and friends, fear of spreading the infection to loved ones and not getting enough breaks is also taking an emotional toll on their mental health. Non-payment of dues, most recently like for doctors in hospitals run by Delhi's North Municipal Corporation, and several instances of violence against doctors and healthcare staff like the one against a doctor at Delhi's Maharishi Valmiki hospital on September 26, have tested the patience of doctors and medical workers for a while now.

The government has enacted legislation to strengthen the laws to act against those perpetrating violence against doctors; the Supreme Court has also stepped in saying that governments must walk the extra mile to ensure that dues are paid to healthcare workers. But there doesn't seem to be an end to their woes.