In a harrowing tragedy exposing the sorry state of medical facilities in Uttar Pradesh, at least 32 children perished between August 10 and 11, allegedly due to no oxygen supply at the BRD Medical College.

Gorakhpur: Uttar Pradesh chief minister Yogi Adityanath has maintained that 63 children in government-run Gorakhpur hospital died because of their ailments and not oxygen shortage, but grieving parents say their children were fine till the oxygen supply was cut.

Some like Mohd Zahid, father of a five-year-old, alleged that BRD hospital authorities refused to declare their children dead, even as their bodies had turned ice cold as this would have further taken up the death toll.

Another father said that while his son started bleeding from the nose, the hospital staff dismissed it saying, “Kachra nikal raha hai” (It’s just body waste that is coming out).

In a harrowing tragedy exposing the sorry state of medical facilities in Uttar Pradesh, at least 32 children perished between August 10 and 11, allegedly due to no oxygen supply. A total of 63 children died within a span of five days, even as different ministers here could be seen making repeated tours of the BRD Medical College and passing the buck.

The chief minister even dubbed the claim of oxygen shortage as fake news. Health Minister Sidharth Nath Singh attributed various other reasons to the tragedy. Yet, nothing can be done to ease the pain of these families.

Zahid, who lives 7 kms from the Gorakhpur hospital, would have liked his daughter Khushi to become a doctor. Khushi was diagnosed with encephalitis and admitted to the hospital on August 10. (Shreya Dhoundial/CNN-News18)

Khushi was diagnosed with encephalitis and admitted on August 10. While she was put on oxygen support on Thursday, hours later the supply was pulled out without any explanation. The family was handed an Ambu pump and asked to keep pumping to keep their child alive.

Zahid insists his daughter was doing fine until the oxygen supply was cut and her health started deteriorating soon after. “The government is lying to cover up their mistake,” he says. “If there was enough oxygen, why was the mask removed? I have lost my daughter why would I lie?”

The hospital, however, did not stop at that. Zahid says the doctors refused to declare Khushi dead for another four hours to keep the rising death toll under the wraps.

“My daughter died at 6pm and I know that because her entire body had turned cold. But the doctors kept insisting that she was alive because mediapersons were waiting outside. They kept injecting needles into my dead child just to show that she was alive,” Zahid narrates.

Khushi was finally declared dead at 10pm. Zahid, who had once hoped that his daughter would study at the BRD Medical College someday, now calls it a slaughterhouse.

While Zahid was still nursing his child, 40 kms away, Srikusun Gupta was worried about one of his twin boys, who was detected with an irregular heartbeat and taken to a private clinic. The clinic referred the five-day-old to BRD Medical College because they didn't have a spare ventilator. 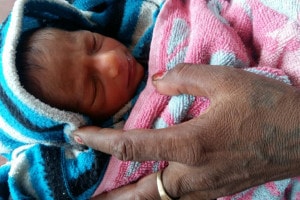 The five-day-old boy was detected with irregular heartbeat and admitted to the government hospital, they were told that there was no ventilator that can be provided. (Shreya Dhoundial/CNN-News18)

What they saw at the hospital’s neonatal ward on August 11 shocked them. “Four babies died in front of us while we were still settling down. And they kept dying all around us till the time we were there," Gupta says.

While Gupta’s boy was admitted in ICU, there was no ventilator or oxygen available. For four hours, Gupta kept pumping an Ambu pump in the hope that a ventilator or an oxygen machine would be provided to them. Two others parents were doing the same to their babies on the same bed.

“Each time I asked, I was told there are no arrangements right now,” he adds.

Gupta is angry that the doctors refused to communicate with the families, fending them off every time someone approached the staff.

“When blood started coming out of my child's nose they said 'kachra' nikal raha hai. How is my child's blood kachra?” He rubbishes the government's claims that not a single child has died due to lack of oxygen.

In Beriapar, Ramesh Yadav hasn't spoken to anyone in the last 72 hours. His 12-year-old daughter Vandana died at the ICU of the BRD Medical College on the morning of August 11, 10 hours after she was admitted with fever. Vandana died 10 hours after being admitted to the BRD Hospital. They were handed an Ambu pump for oxygen supply. (Shreya Dhoundial/CNN-News18)

Her uncle, Umesh Yadav, was handed an Ambu pump when he asked the doctors for oxygen. He was told there is a technical problem.

"What does the government know about how things were inside the ward? Where were they? I was there and I can tell you the situation was very bad," Yadav demands. 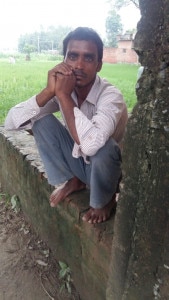 Along with Vandana's body, the family was also given a stern warning — “Leave through the backdoor and don't speak to the media.”