Twitter exploded with allegations that the document shared mistakenly by the young environmentalist shows how her tweets “weren’t organic and plan of a larger PR campaign to malign India”.

Swedish environmental activist Greta Thunberg has landed up in a fresh controversy over one of her tweets, which has now been deleted, on the ongoing farmers’ protests in India. In the tweet, she referred to a “toolkit” for the farmers and attached a Google document with details.

Thunberg later on Wednesday posted a fresh tweet with an “updated toolkit”, which caused further furore on social media.

Twitter exploded with allegations that the document shared mistakenly by the young environmentalist shows how her tweets “weren’t organic and plan of a larger PR campaign to malign India”.

On Tuesday, American pop singer Rihanna and Thunberg had tweeted about the internet shutdown at farmers’ protest sites around New Delhi.

Thunberg’s tweet drew the ire of environmental activists in India who called out the global ‘School Strike for Climate’ founder for tweeting in the matter while allaying her duties as an environmentalist. Professor Shamika Ravi pointed out the irony of a climate activist tweeting in the matter while turning a blind eye to certain farming practices practiced by agriculturalists in India. Rihanna was also called out.

The Ministry of External Affairs shared a statement in which it urged celebrities to practice restraint and tweet responsibly.

“Before rushing to comment on such matters, we would urge that the facts be ascertained, and a proper understanding of the issues at hand be undertaken. The temptation of sensationalist social media hashtags and comments, especially when resorted to by celebrities and others, is neither accurate nor responsible," the statement read.

Several ministers of the Narendra Modi government on Wednesday said that it was a part of ‘international propaganda’ and tweeted with hashtags #IndiaTogether #IndiaAgainstPropaganda.

Here’s decoding Thunberg’s ‘toolkit’, which is at the centre of the outrage:

The document shared mistakenly by Greta shows how Rihanna’s and other such tweets weren’t organic and plan of a larger PR campaign to malign India. This makes it important to treat all such statements/tweets by important people in India & abroad to be seen in the context of the planned and pre-scripted campaign. 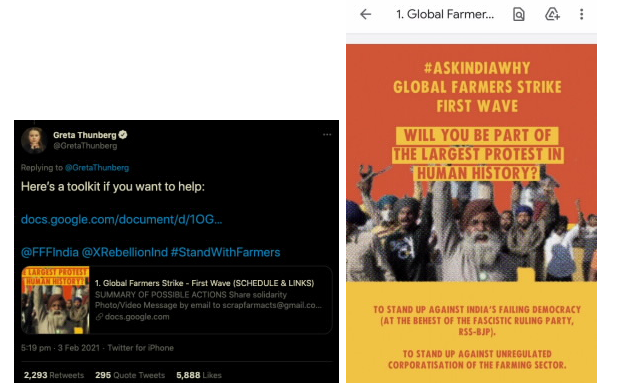 What If Laws Are Repealed?

The document lists that one of their weakness is that there is no plan beyond repeal. This shows how sinister the entire campaign is. The document also aims to target India’s image and soft power push. It will talks about targeting India’s Yoga & Chai image. A discredited India will only be a gift to India’s enemies and no prizes for guessing who. The PPT which contains details on how-to run-down India is made by a self-professed Khalistan supporter Mo Dhaliwal. 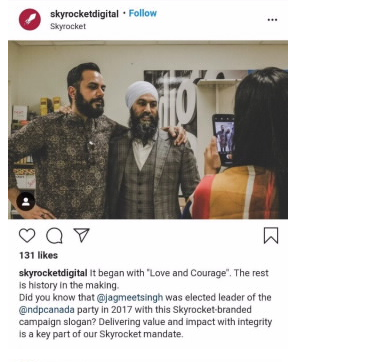 Not surprisingly, tweets from the Google drive are used word by word by Congress Party.