At least 32 people were killed and more than 350 sustained injuries as Panchkula turned into a virtual warzone after Dera Sacha Sauda chief Gurmeet Ram Rahim Singh was found guilty of rape by a CBI court on Friday. The followers of the godman have gone on a rampage in three states. The rioters torched at least two railway stations, a power grid and petrol pumps in Haryana. In Delhi, a train was set on fire in Anand Vihar and two buses were also torched. Media persons, including News18 staff, came under attack. The government's claims of keeping the situation under control fell flat.

Highlights of the day:

A special CBI court on Friday convicted Dera Sacha Sauda chief Gurmeet Ram Rahim Singh of raping two woman followers in a case filed on the basis of an anonymous written complaint in 2002. The Dera chief was taken into protective custody by the Army.

Thousands of Gurmeet Ram Rahim followers had started pouring into Panchkula and nearby areas, anticipating a verdict in the spiritual leader's favour.

However, violent supporters rampaged through the city after learning that self-styled godman had been convicted of rape charges.

In a large-scale violence that ensued the Dera chief's conviction led to the death of at least 32 people and injuries to more than 250 people.

The violence spread through Panchkula, Sirsa and other parts of Haryana, compelling security forces to take stern action against the angry mob running amok.

Within hours, hundreds of vehicles were torched, media vans were overturned, and hospitals in Panchkula were deluged with people who sustained injuries during the violence.

The savagery soon reached the national capital. At least 4 coaches of a train were set afire allegedly by the Dera supporters at Anand Vihar railway station. Two DTC buses were set ablaze in Loni area of New Delhi, forcing the Delhi Transport Corporation to block DTC services to NCR region.

Haryana DGP BS Sandhu said more than 1,000 of the godman’s supporters had been detained in Panchkula on charges of arson and destruction of public property and said the situation was now coming under control.

In the wake of riots that broke out after Gurmeet Ram Rahim's conviction, Section 144 was imposed in 11 districts of Delhi, 10 districts in Punjab and parts of Uttar Pradesh, too.

Kerala chief minister Pinarayi Vijayan on Friday wrote to Prime Minister Narendra Modi, requesting him to ensure the safety of "Malayalees who are in fear of their life and property".

Vijayan wrote: "It is worrying that widespread instances of violence, rioting, and arson are being reported in several north Indian states, following the verdict convicting Gurmeet Ram Rahim by a CBI special court in Panchkula. Reports indicate that the death count and the number of injured are increasing by the hour."

"... May I request you to take immediate and necessary action to ensure that the life and property of all our citizens are protected without fail. Strict action against those behind these unprecedented acts of violence may also be ensured."

The Congress on Friday called for the resignation of Haryana chief minister M L Khattar, with party president Sonia Gandhi expressing grave concern over the violence in the state.

The Congress president appealed for peace, while vice-president Rahul Gandhi stressed that violence and brutality had no place in society.

"@PMOIndia must put the interest and safety of Indians before his party's interests. @mlkhattar must resign," the party said on Twitter.

As many as 445 trains have been cancelled due to the law and order situation in Punjab and Haryana as Dera Sacha Sauda chief Gurmeet Ram Rahim Singh was convicted in a rape case, officials said on Friday.

"485 train services have been affected (due to the violence). Of these, 445 stood cancelled," Neeraj Sharma, spokesperson, Northern Railway, said.

The Railways said the accumulative figure for cancelled trains on six days, from August 23 till August 28, was at 445.

Information and Broadcasting Minister Smriti Irani tonight condemned the attack on media during violence in Panchkula but at the same time advised news channels to refrain from "causing panic, distress and undue fear".

"Attack on media, damage to property condemnable. Appeal to all to maintain peace," she said in a tweet.

At the same time, she added, "Drawing the attention of news channels to clause B of Fundamental Std of NBSA (News Broadcasting Standards Authority) refraining channels from causing panic, distress & undue fear."

The Centre on Friday night asked the Haryana government to provide adequate security to the CBI special court judge who convicted Dera Sacha Sauda chief Gurmeet Ram Rahim Singh in a rape case. The Union home ministry told the Haryana government that Judge Jagdeep Singh should be provided the highest level of security in view of the threat perception after he delivered the verdict against the Dera head, an official said.

The home ministry will analyse intelligence inputs before deciding whether the judge’s security needs to be handled by a central force, such as the CRPF or CISF. Widespread violence in Haryana and a few neighbouring states following the conviction of the Dera chief left nearly 30 dead and scores injured.

The Punjab and Haryana High court has directed the Police to register an FIR against anyone, including politicians, trying to interfere with the enforcement of the law. "In case of failure on part of the police officer to register an FIR, similar action would be called against him. No politician, leader, social worker, spiritual leader, religious leader or any such organisation shall make any provocative speech or statement which may have a tendency to affect public order"

Update on Law and Order situation in Punjab:

According to DGP control room, Punjab, no death or injury has been reported. Curfew has been imposed in 10 districts, namely, Mansa, Bhatinda, Ferozepur, Faridkot, Malout, Fazilka, Patiala, Barnala, Faridpur and Sagrur.

After Delhi and parts of Uttar Pradesh, section 144 has now been imposed in Uttarakhand's Nainital.

Baghpat District Magistrate directs all schools in the region to remain shut on Saturday, ANI reports.

Five hundred people have been rounded up.

Panchkula is completely peaceful at the moment, flag marches conducted.

It would have been very difficult to take Ram Rahim Singh to Ambala jail as Dera followers were there on the way.

As a strategy, we didn't take Ram Rahim Singh to Ambala, but Rohtak's Sunaria jail where he is present right now.

We used tear gas, lathi charge, pellet bullets and fired on them (protesters) where arson was reported.

In the wake of violence in Haryana, Punjab, and Delhi, the Delhi Transport corporation (DTC), has suspended all buses in the NCR region. The Delhi-Lahore bus has also been suspended for today. 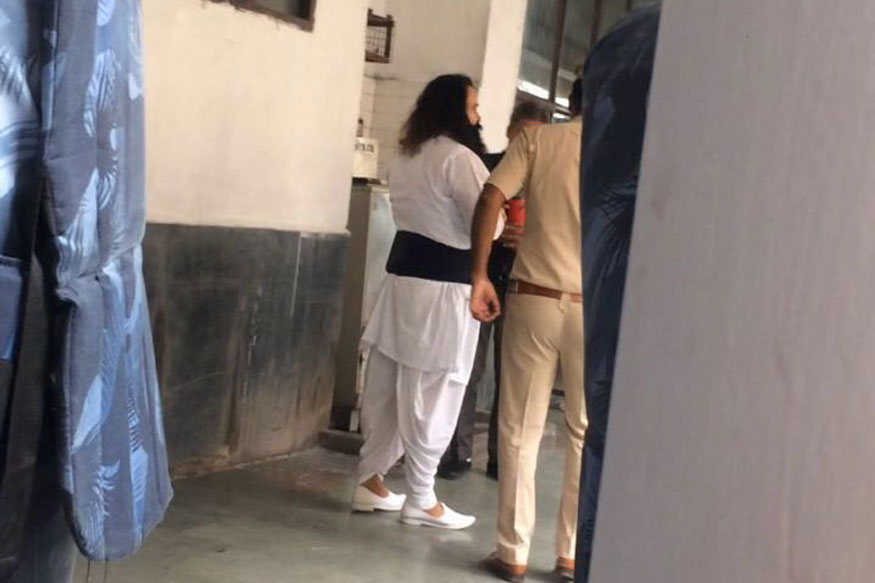 Chandigarh Police have arrested six private commandos of Gurmeet Ram Rahim Singh and seized weapons and petrol cans. The Army is staging flag-march in the 10 curfew-bound districts of Punjab to restore the confidence of the people as violence swept through the state after Ram Rahim was found guilty of rape. Punjab Chief Minister Amarinder Singh, who was personally monitoring the situation, appealed to the people to remain calm and not to take the law in their hands. "As a preventive measure, we have enforced Section 144 of the CrPC in Delhi in 11 police districts," said SBK Singh, special commissioner of police (Law and Order, North).

Section 144 of the Criminal Procedure Code (CrPC) of 1973 empowers an executive magistrate to prohibit an assembly of more than four people in an area.

The national capital has 13 police districts. North and central districts will not fall under the ambit of the orders since no incidents were reported from there, the officer said.

"Wherever even a minor incident or gathering was reported or the area is bordering Haryana, we have taken precautions. The prohibitory orders will be in place until September 8," Singh added. 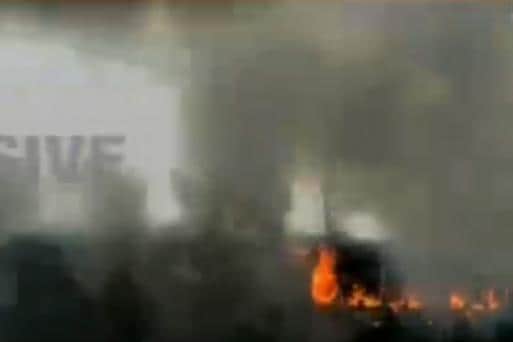 Prime Minister Narendra Modi took to Twitter on Friday evening and expressed disappointment over the turn of events in Haryana, Punjab, and Rajasthan after Dera Sacha Sauda chief Gurmeet Ram Rahim was convicted in a rape case filed in 2002.

"The instances of violence today are deeply distressing. I strongly condemn the violence and urge everyone to maintain peace."

Prime Minister said that the law and order situation in Haryana was being closely monitored. "I reviewed the situation with the NSA & Home Secretary."

"Urged officials to work round the clock to restore normalcy and provide all possible assistance that is required."

The instances of violence today are deeply distressing. I strongly condemn the violence & urge everyone to maintain peace.

Urged officials to work round the clock to restore normalcy and provide all possible assistance that is required.

Director General of Police, Law and Order, Punjab, Chandigarh had alerted all CsP and SSsP in Punjab that Dera Sacha Sauda supporters were storing petrol, diesel sharp-edged weapons etc. ahead of the verdict in the rape case against the self-styled godman. The government ignored the intelligence.

The law & order situation is being closely monitored. I reviewed the situation with the NSA & Home Secretary.

Rahul Gandhi says violence and brutality have no place in society; condemns "lawlessness" in Haryana.

Section 144 was imposed in Delhi after intelligence reports suggested that a section of Dera supporters was planning to mobilise and bring the national capital to a halt tomorrow morning.

Delhi police say section 144 imposed all across Delhi in the wake of violence in Haryana, Punjab and New Delhi.

As a precautionary measure, petrol pumps in Delhi have also been shut down

Despite the conviction of Dera Sacha Sauda chief Ram Rahim in a rape case, BJP MP Sakshi Maharaj says it was a conspiracy to malign the image of Sadhus and Gurus. He says that just one person complained about the rape and the administration went against the Dera Sacha Sauda chief, and he was convicted. "Why can't they see crores of people who follow Gurmeet Ram Rahim?"

Manohar Lal Khattar who appeared before media after four hours of violence looked puzzled when asked about the number of deaths. He looked behind and asked the number.

"Strong action will be taken against those responsible for these violent clashes."

The hearing to decide the quantum of punishment to Dera Sacha Sauda chief Gurmeet Ram Rahim Singh, convicted in a rape case by a CBI court in Panchkula today, will take place through video-conferencing on August 28.

The judgment, holding Singh guilty of raping two female followers, mentions that the hearing will be held through video-conferencing, Central Bureau of Investigation (CBI) sources said.

The quantum of sentence will be pronounced on August 28, CBI counsel HPS Verma told reporters outside the court in Haryana.

Video footage of criminals who set DTC buses on fire.Please inform @DelhiPolice @DCPNEastDelhi or call 100,if any clue about their identity. pic.twitter.com/fB6YRdkoR8