Adya Singh 7, had died after being admitted in Fortis hospital for dengue treatment.

The itemised bill, which runs 19 pages long, shows that Fortis Hospital charged the parents for 661 syringes and 2,700 gloves, among other things, that were supposedly used during the treatment.

New Delhi: The parents of a seven-year-old dengue patient were billed Rs 16 lakh for a 15-day stay by Fortis Hospital in Gurugram. At the end of the stay, the girl, Adya, died.

The itemised bill, which runs 19 pages long, shows that Fortis Hospital charged the parents for 661 syringes and 2,700 gloves, among other things, that were supposedly used during the treatment.

The father, Jayant Singh, who lives in Dwarka, had paid the amount upfront but accused the hospital of inflating the bill and imposing arbitrary costs. Despite the high cost, he said, the doctors paid little attention to Adya’s health.

Union health minister JP Nadda has taken note of the incident and tweeted to offer his support to the family. “Please provide me details on hfwminister@gov.in. We will take all the necessary action,” he tweeted.

Fortis denied any wrongdoing and said it had followed the standard medical procedure. In a statement, it said that the girl was brought in a critical condition and all clinical guidelines were adhered to while treating the patient.

Speaking to News18, the girl’s father said the stay at Fortis was hellish from the beginning. The girl was shifted to Fortis on August 31 after she was diagnosed with Dengue Type IV and doctors at Rockland Hospital in Dwarka asked him to shift her to a hospital with a Paediatric Intensive Care Unit (PICU).

He said that immediately upon arrival, Adya was sedated heavily and admitted to the PICU. She was jabbed with over 40 injections every day, often with the expensive variety of drugs even when much cheaper options were available. 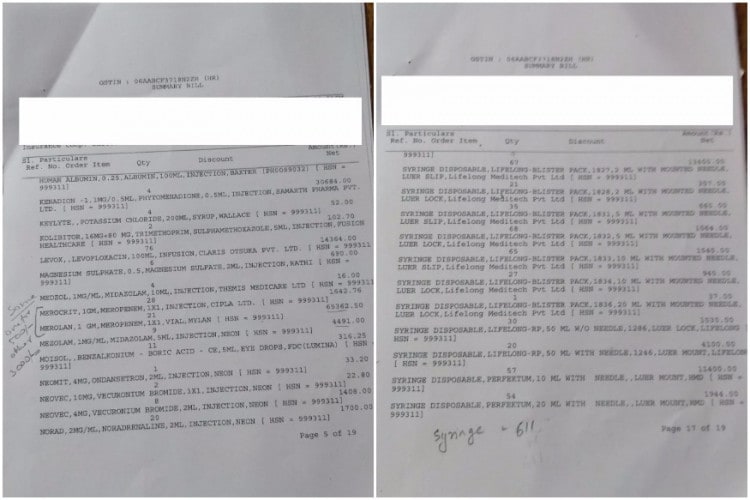 Images of the bill tweeted by Jayant Singh's friend.

Giving an example, Singh said that the doctors gave Adya an intravenous anti-bacterial drug, Meropenem, which costs around Rs 500 per vial. But later they opted for a branded version of the same drug that cost Rs 3,100. At the end, he ended up paying over Rs 4 lakh for the drugs and Rs 2.7 lakhs for consumables like gloves.

Despite the high bills, he alleged, there were no doctors to take care of his daughter on weekends. Once their insurance limit ran out, the hospital started demanding the bill amount at the end of the day, over a lakh per day.

On October 14, the doctors told the parents that the girl had 70-80 per cent brain damage and would never recover completely. They still pushed for a plasma treatment that costs over Rs 15 lakh, Singh said.

It was then that he decided to take Adya to another hospital. Singh said he was not even provided an ambulance by Fortis. He said he suspects that Adya had already died by then and the hospital was just looking to make more money.

Adya’s mother said they couldn’t even cry because they had to pay bills, arrange an ambulance and search for another hospital to certify that she is dead. The girl was ultimately pronounced dead by Rockland Hospital. The parents of the girl are contemplating whether to sue the hospital and have taken to social media platforms to talk about the incident. “We want the government to at least take out corruption from the medical field. People actually die because of it,” the mother said.

Fortis hospital, however, said that Adya had suffered from Dengue shock syndrome and had to be put on life support as her condition kept deteriorating.

“On 14th September, 17, family decided to take her away from the hospital against medical advice (LAMA - Leave Against Medical Advice) and she succumbed the same day,” it added.

“Care of ventilated patients in ICU requires a high number of consumables as per globally accepted infection control protocols. All consumables are transparently reflected in records and charged as per actuals,” it said.