Har Ghar Tiranga News Updates: From Sher Shah Suri’s Tomb in Bihar to Qutub Minar in Delhi, a large number of ASI monuments across India have been lit up in tri-colour theme, with Prime Minister Narendra Modi saying the effort will surely strengthen the ‘Har Ghar Tiranga’ movement. The ASI has shared images, including aerial footage, of some of these sites bathed resplendently in colours of India ahead of Read More

#WATCH | Haryana: A 6,600 feet long Tricolour yatra was taken out in Jhajjar as part of #AzadiKaAmritMahotsav celebrations ahead of Independence Day pic.twitter.com/HI674dQVeQ

WE, the people of INDIA.

OUR love for the nation binds us.

OUR sacred CONNECTION to India unites us.

When and Where to Watch President Droupadi Murmu's Maiden I-Day Eve Speech?

India will be celebrating the 76th Independence Day on August 15 and all the countrymen are already in a festive fervor. The day is an occasion to pay tribute to the freedom fighters for their sacrifices to make India free from British rule and to commemorate India’s journey as a free nation. Every year, the Prime Minister of India hoists the national flag at the Red Fort in Delhi and addresses the nation to mark the celebration of the Independence Day. READ MORE

Where and How to Watch PM Modi’s Speech, Flag Hoisting Ceremony at Red Fort on August 15?

India is gearing up to celebrate its 75th Independence Day on August 15. As the day nears, the feeling of patriotism is rising in the hearts of all citizens, and the tricolour has illuminated the nation. This year, the government of India has launched a new initiative, “Har Ghar Tiranga”. While launching the campaign, PM Modi stated, “75 years back, it was on this day that the country adopted its present national flag. Today, we recall the monumental courage and efforts of all those who dreamt of a flag for free India when we were fighting colonial rule. We reiterate our commitment to fulfil their vision and build India of their dreams.” READ MORE

The Indian Embassy in Russia unfurled the national flag from a parachute in Moscow during the ongoing Azadi Ka Amrit Mahotsav celebrations ahead of Independence Day. The embassy shared a video on Twitter, where a skydiver unfurls a tricolour from the parachute in the skies of Russia. The caption with the video reads, “High above in the skies of Russia the Tiranga is unfurled with great pride as we celebrate the Azadi Ka Amrit Mahotsav HarGharTiranga campaign.” READ MORE

MP: Man Electrocuted While Putting Up Tricolour on Shop

A 45-year-old man died of electrocution while putting up a tricolour on a shop in Madhya Pradesh’s Khargone district ahead of the country’s independence day, police said on Sunday. The incident took place on Saturday evening in Narmada Road area under Barwaha police station limits, some 80 km from the district headquarters, an official said. The man, identified as Mohan Patel, died while he was putting up the national flag on an iron rod which came in contact with a power supply line on the roof of a building housing the grocery shop, Barwaha police station in-charge Prakash Vaskale said. 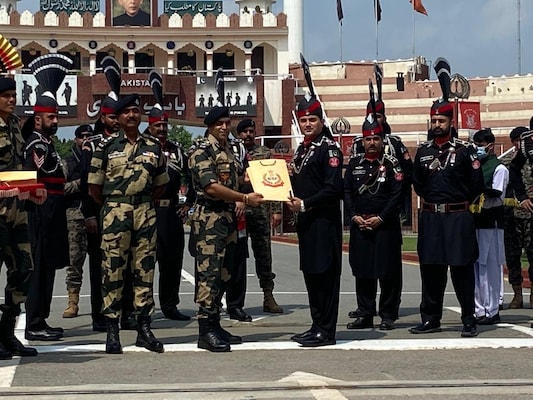 Chief Minister N Biren Singh on Sunday flagged off a motorbike rally from state capital Imphal to Mao town on the Nagaland border to mark the 75 years of India’s Independence. The rally, organised by the Home Department and the state police, will cover a distance of 105 km. “The rally is a part of the ‘Azadi Ka Amrit Mahotsav’, and will take the message of the country’s independence to the people,” Singh said. It will also spread the message of oneness and integrity, he added.

This is the first of its kind installed in North Kashmir. I thank the citizens of this region to take forward the 'Har Ghar Tiranga' campaign: GoC Kilo Force Maj Gen SS Slaria pic.twitter.com/brPUmjQtRk

High above in the skies of #Russia the #Tiranga is unfurled with great pride as we celebrate the #AzadiKaAmritMahotsav #HarGharTiranga campaign@narendramodi @DrSJaishankar @AmbKapoor @MEAIndia @IndianDiplomacy @AmritMahotsav @DDIndialive @ANI pic.twitter.com/hX6DqNJmUd

Students, teachers and officials of Jamia Millia Islamia here took out a Tiranga rally to commemorate 75th Independence Day. The rally was flagged off by Vice Chancellor Prof. Najma Akhtar at the VC Office lawns as part of Azadi Ka Amrit Mahotsav. “Students of the university and Jamia Schools, NCC cadets and NSS volunteers, teaching and non-teaching staff including Deans, HoDs and senior faculty members participated in the rally in large numbers with patriotic fervour,” an official said. Holding the tricolour in their hands and raising patriotic slogans, the participants passed through the Maulana Mohammed Ali Marg and covered the whole campus before the rally culminated at the university amphitheatre. After the rally, the volunteers distributed the national flag in nearby localities.

India@75: Mahatma Gandhi Temple in Telangana Sees an Increase in Number of 'devotees'

As patriotic fervour grips the country on the eve of its 75th year of independence, there has been a marked increase in the footfalls to a temple for Mahatma Gandhi in a village in this district in Telangana, with the villagers flocking to have his ‘darshan’ and seek blessings. For many people around Chityal town in Telangana, about 75 KM from Hyderabad, visiting the Mahatma Gandhi Temple is becoming a sentiment. The first-of-its-kind temple at Pedda Kaparthy village near Chityal town in the district has been drawing attention from even far off places, says PV Krishna Rao, Secretary of the Mahatma Gandhi Charitable Trust which maintains the shrine. Rao says the temple which usually has visitors numbering 60-70 on a normal day is now witnessing increased flow of devotees in the range of around 350 after the Telangana government and the Centre’s initiatives to celebrate the 75th year of independence.

Pay Homage to All Those Who Lost Their Lives: PM Modi on Partition Horrors Remembrance Day

Today, on #PartitionHorrorsRemembranceDay, I pay homage to all those who lost their lives during Partition , and applaud the resilience as well as grit of all those who suffered during that tragic period of our history.

Prime Minister Narendra Modi’s mother Hiraba, who entered the 100th year of her life in June this year, on Saturday distributed national flags to children at her residence on the outskirts of Gandhinagar city in Gujarat. Chief Minister Bhupendra Patel kicked off the three-day “Har Ghar Tiranga” campaign to commemorate the 75th anniversary of Independence by hoisting a huge tricolour on a 100-feet tall flag post at Children’s University in the state capital on Saturday. Under this campaign, Hiraba distributed national flags to children at her residence and waved the tricolour with them, a government release said. She lives with the Prime Minister’s younger brother Pankaj Modi. 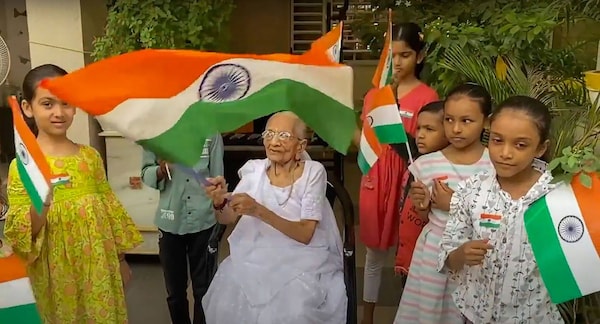 A 10 km race of around 3,500 police personnel and rally of 100 four-wheelers and 60 bikes was held from Marine Drive today to mark 75 years of Independence. Deputy CM Devendra Fadnavis and actor Akshay Kumar flagged off the race and car and bike rally. Chandigarh | Union Minister Meenakshi Lekhi took part in the Tiranga Yatra taken out by BJP under the #HarGharTiranga campaign (13.08) pic.twitter.com/OLtcf5jDpf

From Kashmir to Kanyakumari, India Painted in Tricolor: Meenakshi Lekhi

Tricolour to Be Unfurled at 130 Archaeological Sites in Country: Union Minister

the 75th anniversary of its Independence. Delhi Chief Minister Arvind Kejriwal on Sunday will lead the “Har Haath Tiranga” celebration on eve of the Independence Day.

“Tirangamayi Dhaohar As part of the #HarGharTiranga Campaign, @ASIGoI illuminates monuments all across India in the hues of tricolour. #AmritMahotsav,” Union Minister for Culture Meenakshi Lekhi tweeted on Saturday. She also shared a montage of illuminated monuments made by the Archaeological Survey of India (ASI).

Prime Minister Narendra Modi on Saturday said he was overjoyed and proud of the amazing response to the ‘Har Ghar Tiranga’ movement. He also said a record participation was being seen from people across different walks of life in the campaign.

From Lucknow’s historic Residency, place of key events during the 1857 Sepoy Mutiny, to Mahatma Gandhi’s birthplace in Porbander, the ASI is also all geared up to hoist the national flag at the sites of 150 of its monuments on the Independence Day, officials said. “Our national flag would be hoisted at ASI sites spanning the length and breadth of the country in the true spirit of India’s diversity and the Azadi ka Amrit Mahotsav. They will be hoisted at Fatehpur Sikri and Agra Fort in our Agra Circle. In Delhi, the tricolour will flutter high at the ruins of Kotla Feroz Shah and Purana Qila,” a senior official had earlier told PTI.

The Taj Mahal, a UNESCO World Heritage Site, is not on the list of monument sites where the national flag would be hoisted on August 15, he had said. The main Independence Day celebrations takes places annually at the Red Fort where the Prime Minister hoists the national flag on the ramparts of the Mughal-era monument. It is a UNESCO World Heritage Site, besides Qutub Minar and Humayun’s Tomb, in Delhi.