Babu, who studies in Andhra Pradesh’s Kendriya Vidyalaya School in Anantapur district’s Goonty, said that he was being subjected to the treatment because his father filed an RTI in 2013 inquiring about the appointment of security guards in the school.

Babu, who studies in Andhra Pradesh’s Kendriya Vidyalaya School in Anantapur district’s Goonty, said that he was being subjected to the treatment because his father filed an RTI in 2013 inquiring about the appointment of security guards in the school.

Dated April 3, 2018, the boy wrote in the letter that his father worked in Kendriya Vidyalaya and had filed an RTI over the appointment of security guards in his school and ever since, the family has been suffering due to the school administration’s “harassment”.

“Our Physical Training (PT) teachers beat us on our legs. My father has complained about this to the administration. In return, they ask us to take a transfer certificate and leave the school. This is because my father filed an RTI,” wrote Babu, in his letter to Javadekar.

The principal, Bharati Devi, has denied the charges and said, “I joined in 2015 and that is when I discovered that Nagaraja has been complaining against KV staff of inflicting harassment on his children since 2010. This is not true, everything that we’ve done has been as per the norms of the Kendriya Vidyalaya Sangathan.”

The 14-year-old was in Delhi for five days, along with his brother Srinivasulu, father Nagaraj and mother Lakshmi Devi. The boys were in their school uniforms and since Babu alleges he was failed, he carried past report cards with him to prove his academic merit to the minister.

The complainants spent their nights at New Delhi Railway Station, ate frugal means and carried a bag full of letters that they had written to authorities regarding issues like the termination of the parents’ services in the school in 2017.

On Tuesday, the father met HRD minister Prakash Javadekar and was directed to address their complaints to the Kendriya Vidyalaya Sangathan. On the same day, the family also met Ramdas Athawale, MoS Social Justice and Empowerment. 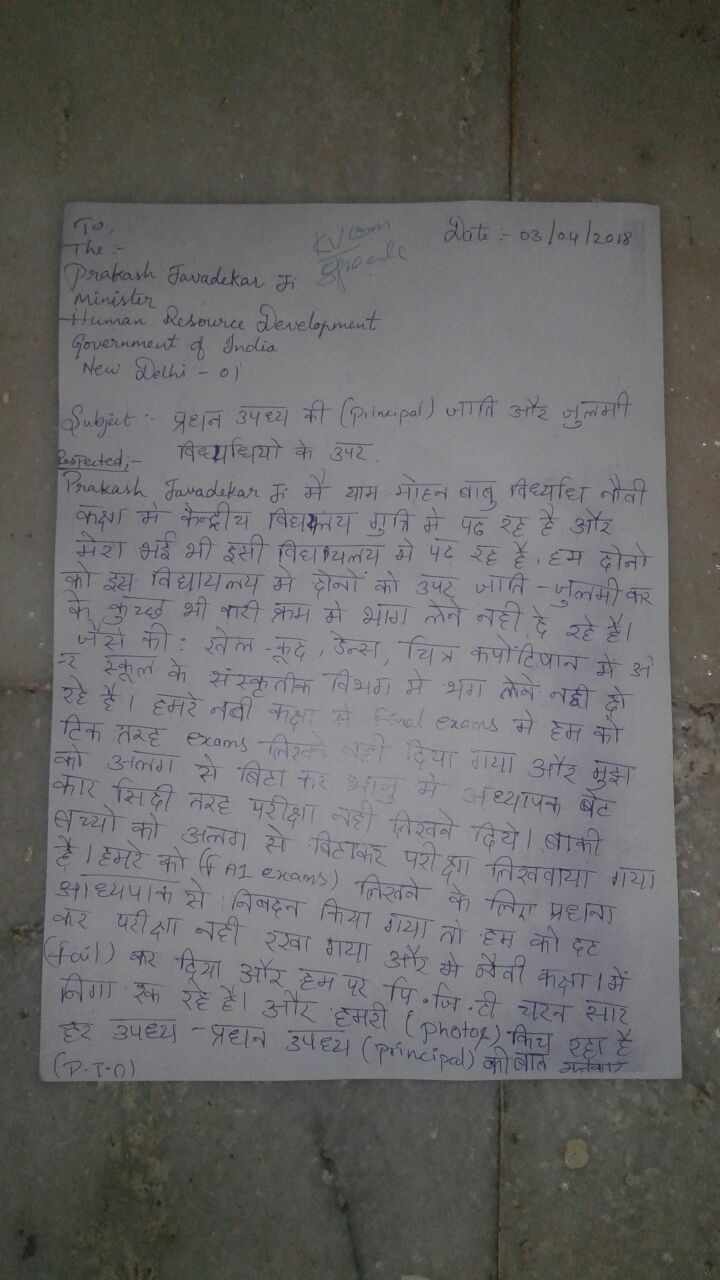 CONTENTS OF THE LETTER

In the subject line of the complaint, Babu wrote, “Pradhan Upadhyaya ki jaati aur julmi vidhyadhiyo ke upar (Regarding the harassment in school inflicted by the principal).”

In his letter to the minister, the student said that the “upper caste staff of his school” was not letting him pursue his education.

“Some people from school are harassing us and not letting us take part in school activities — we are refrained from participating in sports, dance, and painting competition. We cannot join the Sanskriti department activities either.”

The 14-year-old said he “fears” going to school.

PAYING THE PRICE FOR RTI?

In 2013, the then school Principal was served a notice by advocate K Sudarsana Rao that said, “My client made a complaint to District Collector of Anantapur about irregularities in the case of appointments of security guards and requested revenue authorities to look into the matter.”

He added, “The disciplinary committee, without adopting principles of justice, passed a resolution of directing my clients Mohan and Srinavasulu to not attend school. In this context, my clients are bringing to your notice the bylaws of the school where under article 60 they have not committed any of the disciplinary misconducts.”

In such a case, asking the students not to attend school “is not only illegal but also against natural justice”.

The school administration went into denial and said that they have always inquired about the absenteeism of both boys and demanded that the children return to school.

When the school terminated the services of Lakshmi Devi, who was a gardener and Nagaraja, a security guard, the issue was taken to the National Commission for SCs in 2017.

Explaining the reason for termination Principal Bharati Devi, in her reply to the commission, said, “Lakshmi could not continue as our gardener due to shortage of funds. On the other hand, Nagaraja’s services were not satisfactory and highly interfered with Vidyalaya matters.”

When asked about the same, Nagaraja said it had nothing to do with interfering in the school’s internal matters, rather the family was being made to suffer due to the RTI. “The principals keep changing but the attitude remains the same. They pass on the bias about my children,” said the father.

The bias against the students and the family was such that Babu alleges, “Whenever a new teacher enters a class, he or she will first ask who Mohan Babu is. Then they know what to do with us.”

Nagaraja has three sons and has removed his youngest from the school as the boy was too young to handle the harassment. The youngest is now being sent to a school run by the Rural Development Trust.