In a span of two years, the Manohar Lal Khattar government in Haryana has gone from its ‘Beti Padhao’ campaign for women empowerment to ‘Beti Chupao’.

New Delhi: In a span of two years, the Manohar Lal Khattar government in Haryana has gone from its ‘Beti Padhao’ campaign for women empowerment to ‘Beti Chupao’ by advocating that women in veils are the pride of the state.

A booklet issued by the state government for farmers says that a woman in a ‘ghunghat’ (veil) is the identity of the state, triggering backlash over pushing regressive attitudes on the state’s population.

The March issue of Krishi Samvad has the photo of the smiling face of the CM on its cover. On its last page, it shows a woman with her face covered entirely carrying cattle feed on her head. The photo is captioned, “a woman in a ghoonghat is the identity of Haryana”. 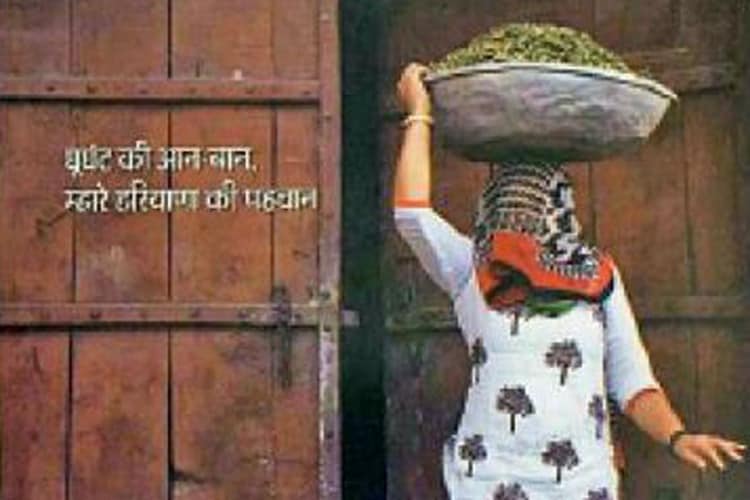 So while on one hand, the state launches campaigns like ‘Selfie with Daughter' to improve its dismally low sex ratio and the flagship ‘Beti Bachao, Beti Padhao' mission to improve education standards, on the other, it keeps women veiled, pushing their empowerment back fifty years.

Covering faces with veils is still a common practice in large parts of the state dictated by religious laws. It signifies that women are showing respect in the presence of men, enforcing the idea that men are superior to women. There have been several campaigns by NGOs in the state to get women to shun the veil.

Jawahar Yadav, a close aide of the Haryana Chief Minister, said judgments should not be made based just on one picture. “We don’t want to keep women in a ghunghat (veil). It would have been better if that picture was not there at all,” he said.

But Congress spokesperson Randeep Surjewala said that regression lies in the mindset of the BJP government in Haryana. “They want to subjugate and objectify women of the state. They have not realized that Haryana women have brought laurel for the country in every field, especially sports like wrestling and boxing,” he said.

Surjewala further said that keeping women in veils is a 19th century concept and the BJP should now come into the 21st century.

This is not the first time that a government booklet has triggered a controversy. A few weeks ago, the Ayush ministry under the central government had published advice for pregnant mothers. It was full of unscientific facts such as pregnant women should abstain from eating meat and should avoid desire and lust.