Homi Bhabha was one of the 117 people killed when an Air India flight to New York crashed near Mont Blanc's summit in 1966.

New Delhi: Has a Swiss expeditioner stumbled upon the remains of a mysterious 1966 Mont Blanc air crash that killed Homi J Bhabha, the father of India’s nuclear programme?

This question would interest many in India after reports said Swiss climber Daniel Roche, who has a hobby of combing the Alps for remains of old plane crashes, reported that he came across the remains of an Air India crash on Mont Blanc, either from 1966 or from 1950.

“I had never found any significant human remains before,” Roche told AFP. This time, however, he had found a hand and the upper part of a leg.

Roche said the remains he had found could be of a female passenger from the 1966 Boeing 707 flight, as he also discovered one of the plane’s four jet engines.

In January 1966, an Air India Boeing 707 from Bombay to New York crashed near Mont Blanc’s summit, killing all 117 people on board. Another Air India flight crashed on the mountain in 1950, killing 48 people.

If the remains are indeed from the Boeing 707 crash of the Bombay-Geneva Kanchenjunga aircraft, it means he has traced the crash that killed India’s pioneering nuclear scientist.

WHAT CAUSED THE CRASH
The official explanation for the crash has been a misunderstanding between the pilot and the Geneva airport about the aircraft’s position. Conspiracy theories, however, including a CIA assassination plot, abound. 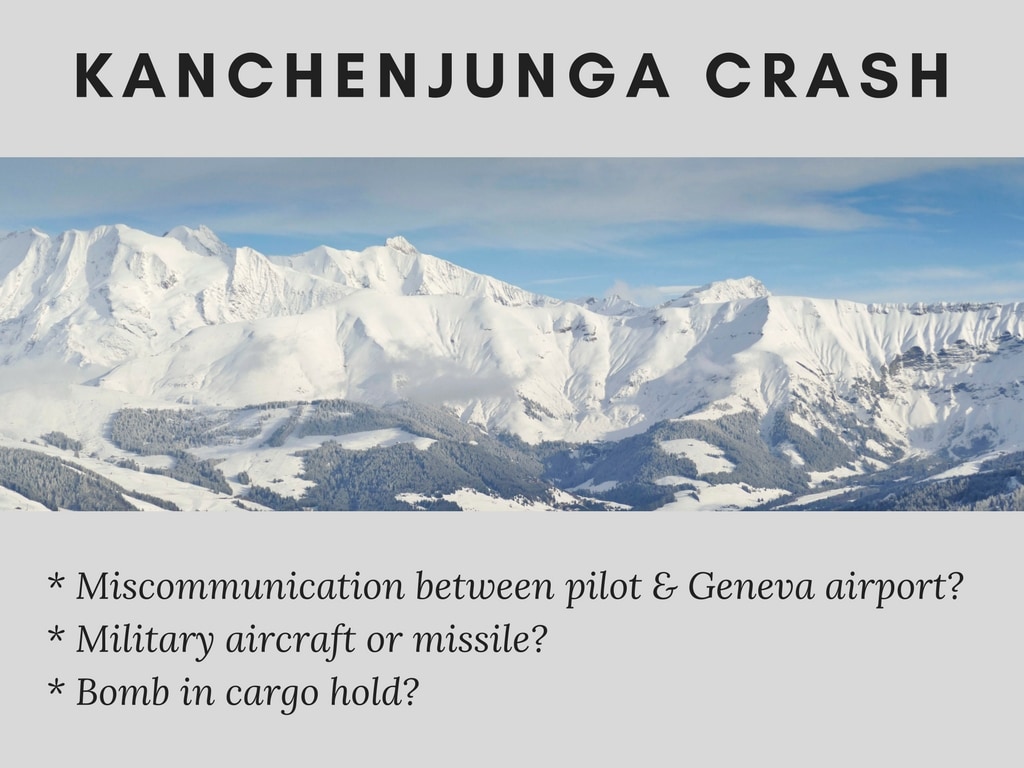 A book titled Conversations with the Crow, which contains the transcripts of journalist Gregory Douglas’s interview with former CIA operative Robert Crowley, claimed the CIA got rid of Bhabha to “paralyse” India’s nuclear programme.

Crowley claims it was a bomb in the cargo section of the aircraft which brought it down in the Alps.

Reports in 2009 had quoted Roche as saying he believed that the Air India 101 was intercepted by either a military aircraft or a missile.

“If Kanchenjunga had crashed in the mountain, there should have been huge fire and explosion as there was 41,000 tonne of fuel in the aircraft, but that was not the case. Just two minutes before the crash, the aircraft was at 6,000 feet above the ground. According to me, it collided with an Italian aircraft and as there is very little oxygen at that height, there was no combustion that could cause an explosion,” this report quoted him as saying.

FATHER OF THE INDIAN ATOM BOMB

Homi Jehangir Bhabha, regarded as father of the Indian nuclear programme, was the founding director and professor of Physics at the Tata Institute of Fundamental Research. Both institutes reportedly played the main role in India’s development of nuclear weapons, which Bhabha also supervised as its director.

The nuclear physicist was on his way to attend a seminar in Geneva when the plane crashed.

Experts will now confirm whether Roche’s findings were from the 1966 crash. What wouldn’t immediately be known is why the plane carrying Homi Bhabha crashed. And whether the father of India’s atom bomb was cut down in the prime of his career.