A BMC health worker collects swab sample of a passenger for COVID-19 test, at a station in Mumbai, July 2. (PTI)

A deeper look at Covid data tells us that the third wave has already hit India.

World Health Organisation chief Tedros Adhanom Ghebreyesus said this week that the world was in early stages of a third Covid-19 wave. Several studies, including one by the Indian Council of Medical Research (ICMR), found the third wave could hit India by August end. But a deeper look at Covid data tells us that the third wave has already hit India.

On July 7, India saw active cases rising in the country after 55 days. The day saw an addition of 784 active cases with the total active caseload burden going slightly up to 460,704, data released from the Union Health Ministry showed. And the second rise came just within a week, on July 14, when, this time, active cases went up by 2,095. Data released by the Health Ministry recently showed 73 districts still have a positivity rate of over 10%. This means 10 people turning out positive from 100 tested and 47 of such districts are in northeast India.

The stabilising trend in Covid-19 cases can be confirmed by regular and rapid fall in the weekly drop in the active and daily cases in last two months. Dr VK Paul of Niti Aayog has said that the slowdown in fall in cases is a warning sign.

Slow down in fall of active cases

Active caseload burden came down by 22.61% in the week ended on May 27 and the fall saw further decline in the next two weeks, by 30.18% and 31.44% between May 28-June 3 and June 4-10 weeks respectively. But from then on, the country started witnessing a dangerous signal – the rate of fall of active cases rapidly came down week after week. 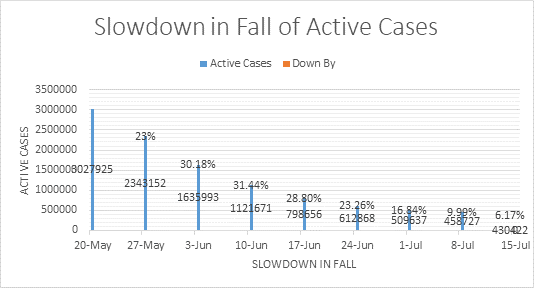 The upward trend of Covid spread is also confirmed by the fact that the drop in seven-day rolling average of daily confirmed cases, which first slowed down rapidly, but has started rising again with daily new cases showing an upward trend. In fact, the fall in the number of daily cases has also slowed down. Daily fresh cases saw their lowest point this month so far on July 12 with 32,906 cases but since then the number has gone up. Also, confirmed cases have stuck in the range of 40,000 cases daily.

It touched a peak of 3,91,232 cases on May 8. On May 31, it came down to 1,75,167 cases and further dropped to 46,979 cases on June 30. But the last days of June are also the period that slowed down the rate of fall of seven-day day average to a thousand or less than thousands daily cases a day. The average of confirmed cases touched the lowest so far on July 12 with 36,349 cases but after that, the rolling average has started increasing day by day and the current average is 39,125 confirmed cases a day.

Daily recovered cases are still above the daily fresh cases, but the scale has rapidly declined. May 20 saw 2,59,551 new cases against 3,57,295 Covid patients recovering on the same day, or 36.66% more recoveries than the new cases added to existing Covid cases. Compare that to July 15, when the country saw 38,949 new cases with daily recoveries just slightly more at 40,226 cases, or just 3.84% more Covid patients recovered the same day when compared with the daily case addition. The number of active cases plateauing should be a double warning for the arrival of the third Covid wave in India when we combine it with R-value. The R-value or the reproductive number or the effective transmission rate tells how fast the coronavirus spreads from one person to the next person. The R-value must be less than 1 for the pandemic to end. In India, the R-value was the lowest in May and is now increasing rapidly, and that only means that the coronavirus has started transmitting again and Covid is spreading across the country.

Analysed by a team of researchers, led by Sitabhra Sinha from the Institute of Mathematical Sciences, Chennai (IMSC), India’s R-value came below 1, at 0.98, around May 11 and subsequently fell to the lowest point since the beginning of the pandemic, at 0.78 around June 16 from the peak of 1.37 between March 9 to April 11. But the R-value has started rising again with eased lockdown measures and almost non-existent Covid appropriate behavior.

What is more worrisome here is the fact that though R-value is still below 1 across India, it has crossed the threshold mark in some states with Home Ministry warning such states to push for Covid appropriate behaviour. As per IMSC analysis, Kerala’s R-value is 1.10 along with some northeastern states (Tripura 1.15), Arunachal Pradesh (1.14) and Manpur (1.07).

Another Covid tracker, ‘Covid India Updates’, put the current R-value even higher, at 0.97 on July 5. As per this tracker, India’s R-value was 1 on April 27 that saw a declining trend till May 28 when it touched the base 0.75 but started increasing after it.

So, even if the second Covid wave did not completely subside in these big states, the lockdown relaxation and absence of Covid appropriate behaviour, in fact, added more trouble to India’s Covid crisis by starting the initial stage of the third Covid wave in the country.

States to watch out for

Prime Minister Narendra Modi held a meeting with chief ministers of six states — Kerala, Maharashtra, Tamil Nadu, Odisha, Karnataka and Andhra Pradesh — over the rise of Covid cases. These six states account for 80% of the total cases and 84% of deaths from Covid, with Kerala and Maharashtra responsible for more than half of the active and fresh caseload burden. Also, when compared to other states, these six states have seen a much higher growth rate in Covid cases in recent times.

Kerala a warning sign: Kerala saw weekly cases going up from the week that ended on June 24. Between June 25 to July 1, its active caseload increased by 2.20%, between July 2 to 8 by 7.8% and by 8% in the last week. On the rise in the number of active case, with R-value of 1.10, Kerala currently shares 27.74% burden of active Covid cases in India and 35% of the fresh caseload burden while the daily test positivity ratio of the state is also 10.95%, much higher than India’s daily positivity rate of 1.99%.

Maharashtra not far behind: Maharashtra carries the second-highest number of active cases in India, at 1,10,505, i.e., 25.67% of India’s active caseload burden. The state that initially carried half of the burden of the active caseload in India has seen ups and downs in its weekly active caseload burden. Accounting for 20% of India’s daily case addition, the state has a daily test positivity rate of 3.7% against 1.99% nationally. The state saw a 2.41% increase in cumulative cases between June 15 and June 30 and 1.95% between July 1 and July 15 and its current cumulative burden is 61,89,257 cases.

Conditions in Kerala and Maharashtra are similar to the situation before the second Covid wave in India.

Four other states, Karnataka, Odisha, Tamil Nadu and Andhra Pradesh have seen weekly active cases going down in the last two months barring a week or two but what is important here in these six states, with a large base of active cases, that they are consistently seeing an upswing in new cases.

Odisha has a daily test positivity ratio of 3%, followed by Andhra Pradesh’s 2.9% data from a Covid tracker website Covid19India says. Tamil Nadu’s daily positivity rate of 1.4% is below the national average of 1.99% followed by Karnataka’s 1.4%.

Northeastern states: Northeastern states together account for 7% of the active cases in India. With around 4.55 crore people in the region as per Census 2011, i.e., just 3.76% of the total Indian population, these states right now carry a much bigger active caseload burden than some of the big states like Uttar Pradesh, Bihar, Chhattisgarh, Gujarat, Madhya Pradesh, Punjab, Rajasthan, and Haryana.

Dr VK Paul said that WHO’s warning about the third Covid wave in fact should be seen as a red flag with situation turning from bad to worse. the next 100 to 125 days were critical for the fight against the pandemic in the country he said.

India is in an almost complete phase of unlock, with Covid appropriate behavior largely absent, something that is visible in repeated requests made by the prime minster and other leaders and officials.

While vaccination looks like the only solution to handle the emerging crisis, its pace has slowed down considerably. Going by the average of the current daily vaccination, the country will still have 46 crore adults, and 88 crore people unvaccinated at the beginning of the next month. They might be vulnerable to the deadly virus unless we act fast.