Well, it seems Pakistan is doing better than India when it comes to controlling crop burning.

Now Pakistan is blaming India for causing an “incursion of smoke”. According to a report in Dawn, the Punjab Environment Department (EPD) has requested the federal government to approach Indian authorities on the pollution issue. They say it has caused smog in different cities of the province, including Lahore. “Crop stubble is also being burnt in our cities but the present and the expected level of burning on the Indian side is alarming,” an EPD official told Dawn.

Though the problem of crop burning has existed in both the countries for decades, it seems Pakistan has been able to tackle it far better than India.

In 2014, Pakistan wasn’t very far from India when it came to the problem of crop burning. Lahore, along with New Delhi, was listed amongst the top 10 worst cities for smog in that year.

A satellite image from November 2015 by ISRO showed that Pakistan had a near same incidence of farm fires a couple of years ago. Mohan Guruswamy, the chairperson for the Centre for Policy Alternatives in Delhi, pointed this out on Facebook.

These maps show that crop burning has reduced massively in Pakistan’s part of Punjab. 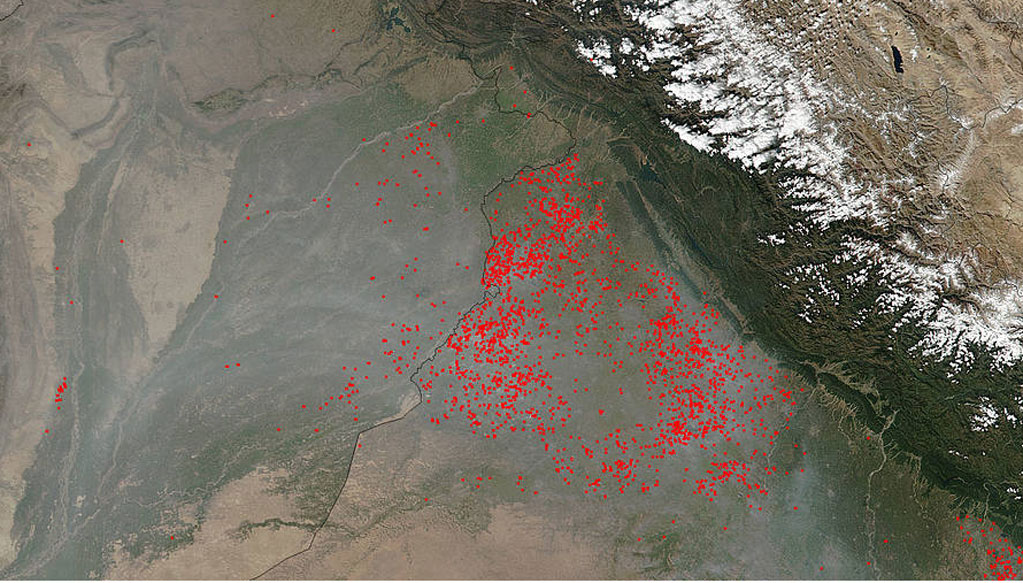 Meanwhile, in India, we are still struggling.

India’s National Green Tribunal (NGT) has pulled up Punjab government, saying that even after “two years of being asked to come up with an action plan, they have not done much.”

The bench has asked if Captain Amarinder Singh-led government can produce a single farmer from Punjab before them who can say the government gave him any kind of assistance to stop crop burning.

The farmers in Punjab and Haryana say there is no affordable alternative to stubble burning. “I will set fire to my farm to clear it. If need be, I will pay the fine because there is no other option,” Jitendra Singh, a farmer told News18.

Farmers have to clear the fields and ready them for the winter crop in the window between kharif harvest and rabi planting. The window is of 20 days. The highly mechanized agriculture makes the input costs very high. Naturally, pollution is the last thing on their mind.

A fine of Rs 2,500 per acre can be levied if a farmer is caught burning his farm. But that is very little compared to the cost of any alternative method.

Time for us to take a leaf out of Pakistan’s book?