A woman protestor shouts as police stop many others during their march against the amended Citizenship Act, NRC and NPR, near Jamia Nagar in New Delhi,2020. (Image: PTI)

The trouble, which erupted just 10 days after a student was injured when a man opened fire on a group of protesters in Jamia Nagar, began in the afternoon itself when police refused permission for the march.

New Delhi: A student of Jamia Millia Islamia on Monday evening claimed that a woman of the varsity "suffered injuries on her private parts" after being hit by Delhi police officers while the personnel were trying to stop the anti-Citizenship Act march from the university to Parliament.

"They were pushing us aside; they had all this gear on. They were saying that they are not using batons, but when we were in the crowd and stranded, they were pushing us and were hitting us below the belt. They were hitting us on our legs. There is a woman student who has been severely injured on her sensitive parts, which is not good. There was also a stampede-like situation, where people got choked and nauseated. That is what happened with me also. I fainted twice. We had no space to breathe," a woman student of Jamia Millia Islamia, who has been admitted to a hospital, said. At least three students News18 spoke to claimed that they have been hit on private parts.

Update from Tughlakabad 10.50pm: Delhi police have entered the protest area, torn down banners and lathi charged protestors. They have threatened to remove the protest within the hour. Please reach the site opposite gali no 33 urgently. #IndiaAgainstCAA_NPR_NRC

The trouble, which erupted just 10 days after a student was injured when a man opened fire on a group of protesters in Jamia Nagar, began in the afternoon itself when police refused permission for the march and escalated as the day progressed. Some of the protesters have been detained by the police, officials said.

Students and other protesters, who were in the first line (near barricades), have been injured and pushed by the riot police. However, an official said that no protesters were lathicharged. A student told News18 that only those near barricades were forcefully stopped, pushed and punched. Police baton charge protesters to push them back during their march against the amended Citizenship Act, NRC and NPR, near Jamia Nagar in New Delhi on Monday. (PTI)

As many as 16 protesters were admitted to Al Shifa Hospital, of which eight have been sent home. Among these, five are women. One of them is said to be in ICU for "chest and stomach injury and respiratory problems", but is stated to be stable. Most of the others came in semi-conscious state. 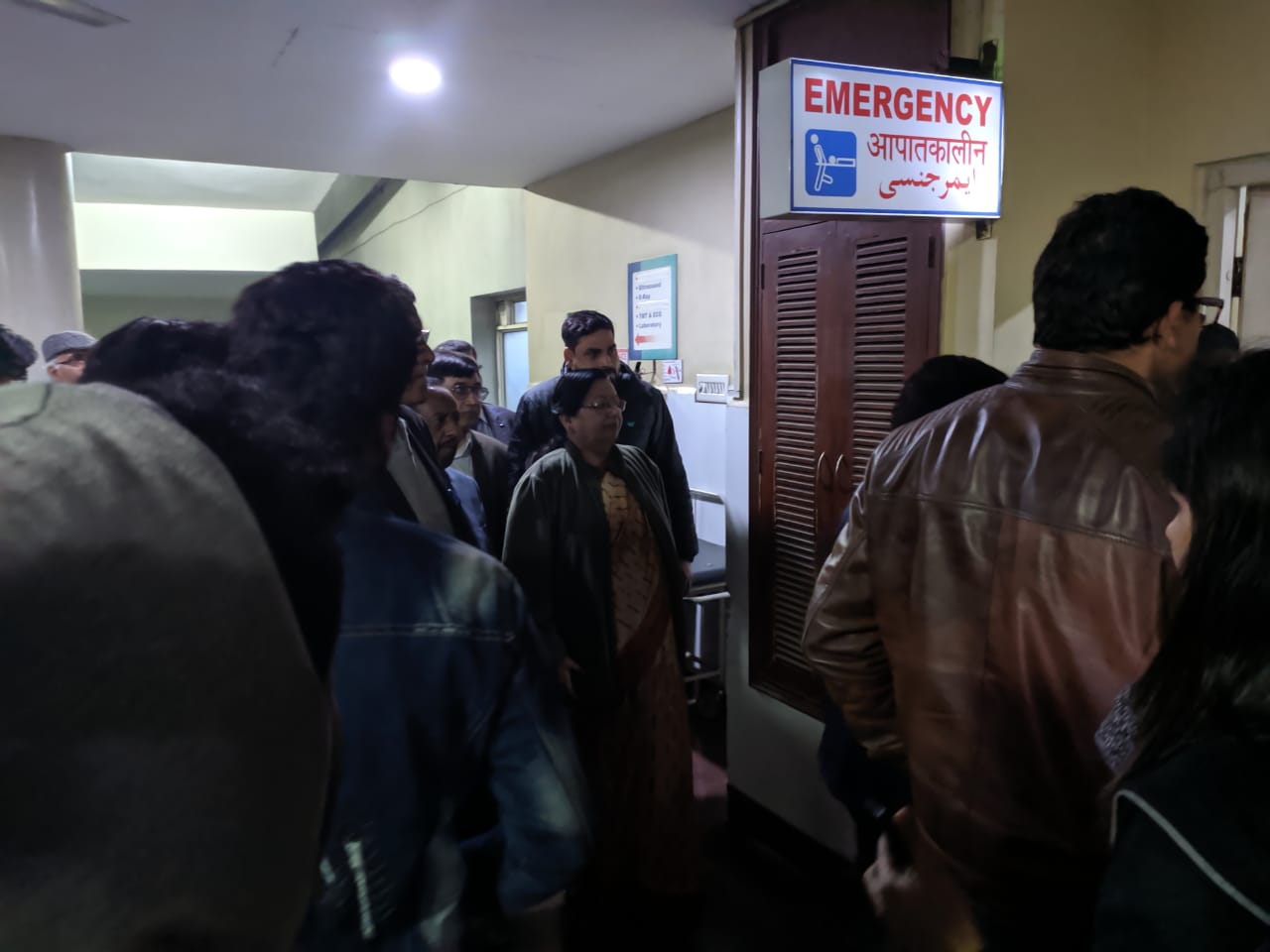 Despite repeated appeals from the police and the varsity administration, the protesters refused to end their agitation that started following a call by the Jamia Coordination Committee (JCC), an organisation of Jamia students and alumni, a report by news agency PTI stated.

The protesters, including several women, began their march from Jamia's gate no 7 around noon amid heavy deployment of security personnel in and around the university.

The scuffle intensified by 6.00 pm as the students refused to budge and a group of protesters gheraoed the Sukhdev Vihar police station. Some protesters jumped over barricades as police in riot gear tried to stop them.

As the number of people joining the protest swelled by the evening, the Sukhdev Vihar Metro Station near the university was closed. "Security Update Entry & exit gates of Sukhdev Vihar are closed," the Delhi Metro Rail Corporation tweeted.

The protesters raised anti-police slogans and shouted "Kagaz Nahi Dikhayenge' (We will not show documents) and "Jab Nahi Dare Hum Goron Se Toh Kyun Dare Hum Auron Se" (When we did not fear the British, why should we fear others).

The CAA allows easier citizenship for Hindus, Sikhs, Buddhists, Christians, Parsis and Jains who came to India from Pakistan, Afghanistan and Bangladesh before 2015 to escape religious persecution there.

Those opposing the CAA contend that it discriminates on the basis of religion and violates the Constitution. They also allege that the CAA along with the NRC is intended to target the Muslim community in the country. However, the central government has dismissed the allegations, maintaining that the law is intended to give citizenship to the persecuted minorities from the three neighbouring countries and not to take away anyone's citizenship.

(With inputs from Zeba Warsi)