Municipal workers spray disinfectant at a market area during an extended nationwide lockdown to slow the spread of the coronavirus disease (COVID-19) in New Delhi, India, April 16, 2020. REUTERS/Adnan Abidi

More than half the total districts in India have been infected by the coronavirus. This number has risen from 84 on March 23 to 284 on April 9 and further to 406.

In India, 406 of the total 732 districts have reported at least one case of Covid-19. This means more than half the number of districts (55.46 per cent) in India have been infected by the virus. This number has risen from 84 on March 23 to 284 on April 9 and further to 406, according to the government figures as of April 18.

170 of these 406 districts have been classified as ‘Hotspots’ or ‘Red Zones’.

These Hotspots have been further divided into two categories:

Clusters: Districts with less than 15 cases.

Large Outbreaks: Districts with 15 or more cases or where there are multiple clusters.

Currently, 123 districts have large outbreaks and 47 are clusters. Tamil Nadu has the maximum 22 Hotspot districts in the country.

16 States Where a minimum of 5 Districts have been identified as Hotspots:

Further classifying the states into districts with large outbreaks and Tamil Nadu tops the list with 22, an indication that all its hotspots have reported a number of cases.

47 Other Hotspot Districts defined as ‘Clusters’:

Jammu and Kashmir (2): Shopian and Rajouri

A Hotspot (Red Zone) can shift category to Hotspot (Orange Zone) if it does not report any new case in 14 days. Further, if there are no reported cases for another 14 days then the district moves to the Green Zone (Non Infected Districts). As of April 16, 27 districts of 17 states did not report a single positive case in the past 14 days. The list is as below:

However, just four of these have been classified as Hotspots – Rajouri, Wayanad and Raipur as Clusters and Shaheed Bhagat Singh Nagar in Punjab as a Hotspot with large outbreak.

Dr Adeela Abdulla, a doctor turned IAS officer who is largely being credited with moving Wayanad from the Red Zone to the Orange Zone category, emphasised on the significance of quarantine in the district. In an interview with TNM, the collector said, “Quarantine is an all-or-none phenomenon. Either you strictly enforce quarantine or you don’t have it at all. There’s nothing like partial quarantine. You have to quarantine everyone who is vulnerable.”

Wayanad used a technique called ‘Geofencing’ which is a location-based service surveilling phones, in which they studied people in the most affected age group, that is, 20 to 40 year olds. A sample was taken to study their behaviour and the ones who broke the quarantine were punished and this was publicised widely for others to understand the seriousness of the issue.

Baldev Singh, a Sikh priest who returned from Germany via Italy, got infected and subsequently died, was the first casualty in Punjab. The death was reported from Shaheed Bhagat Singh Nagar, also known as Punjab’s NRI belt. But no new cases have been reported from this Hotspot area since March 26 – for 23 days till April 18. If it does not report any new cases for five more days, it would be declared a Green Zone.

No New Case in Bhilwara for Eight Days

Bhilwara in Rajasthan, which became a model example of containment for the rest of the country, may soon move from Red Zone to Orange Zone. Bhilwara reported its first case on March 19 and the number rose to 26 in the next couple of weeks. But since then the administration did a remarkable job and the district has not reported any new Covid-19 case in the last eight days, since the 9th of April. If there are no cases for six more days, Bhilwara will move to the Orange Zone. A total of 28 days without cases will make Bhilwara the first district to move from Red Zone to Green Zone by May 7.

10 Worst Hotspot Districts as on April 18:

Twenty districts have more than 100 cases. These are South Delhi, New Delhi, Central Delhi, Agra, Jaipur, Jodhpur, Bhopal, Ahmedabad, Vododara, Indore, Thane, Mumbai, Pune, Kasargod, Hyderabad, Chennai, Kurnool, Guntur, Coimbatore and Kolkata. These account for more than half of all the confirmed cases and 67 per cent of all reported deaths. Incidentally, most of these are big Indian affluent cities which are also powerful economic zones. This does not augur well for the economy as it suggests that these districts would have an extended lockdown. 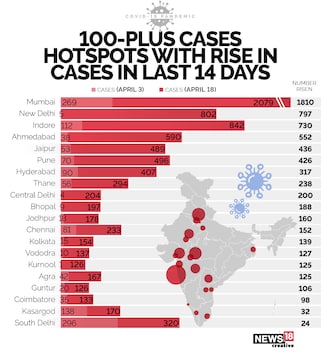 Kasargod and South Delhi have done an excellent containment job in the past two weeks after reporting a high number of cases in the first week of April.

Other Hotspots With Significant Rise in Cases

Some other hotspots that have also seen a significant rise in cases over the last fortnight include Tirrupur (rise of 79) and Tiruchirapalli (46) in Tamil Nadu, Nashik (55), Baramulla (40) and South East Delhi (24).

Amritsar (7), Basti (11) and Ranchi (13) are some of the other important districts that have seen a rise in cases in the last 14 days.