How Civilian Killings During Encounters in Kashmir Have Become The 'Norm'

The killing of the civilians on Sunday has left people shocked and angry and Kashmir witnessed complete shutdown on Monday.

It was almost early morning. Muhammad Mukeem Bhat was going through his English guidebook one last time to prepare for the first paper of his class 12 examinations. At around 3 o’clock heavy gunfire broke out in his neighborhood. Terrified, Mukeem woke up his parents in alarm.

A gunfight had broken between Army and some militants in a nearby house. The encounter was unfolding in Laroo, in South Kashmir’s Kulgam area, 70 kilometers south-west of Srinagar. J&K police’s counter-insurgency units had cordoned the house. The forces hadreceived a specific intelligence input that militants are hiding inside a house in the neighborhood’s clustered residential area.

The initial burst of gunfire soon turned into a full blown encounter. Two army soldiers were injured and were rushed to the army base hospital in Srinagar.

A few meters away 40-year-old Shiraz Ahmad Bhat with his wife and three children were quaking in fear in their house. That’s because it was his house, where militants were holed up, which had become the target of the ongoing encounter. Bullets were flying all around Bhat and his family.

“I ducked under the floor and lay flat on the floor holding my kids as the firing began. The bullets were piercing the windows and the militants in another side of the house were firing back,” recalls Shiraz, whose eldest child is eight years old and youngest two.

At 7 am, he says, the house caught fire and they were taken out of the house by the forces.

By 10 in the morning the guns fell silent when the three local militants of Jaish-e-Mohammad outfit were confirmed dead. However, by sunrise people had gathered around the encounter site and had started pelting stones on the forces. Several youths were injured in retaliatory firing by the forces.

The locals say the forces withdrew from the site with the bodies of militants at around 11 am, leaving the two-story house burning. People approached the house trying to douse the flames. “We brought in spray motors to douse the flames,” said a local, Mohammad Yaqoob.

Among those who reached the encounter site was Mohammad Mukeem. He was in the lawn of the house, trying to clear the rubble with other youth when a deafening blast went off. Everyone started to run away in the chaos but Mukeem and a dozen people around him fell to the ground.

By this time local photojournalists had also reached to the encounter site and at the time of the blast, they were only a few meters away.

“We rushed towards the house as we heard the bang,” Sheikh Mashooq a local photojournalist told News18. Mashooq and his colleagues saw perforated bodies, blood and flesh splattered all around.

In the blast, believed to be set off from an explosive left at the site of the encounter, seven civilians were killed and dozens injured.

Mukeem died on the spot. His younger brother, Adnan, was on the rear side of the house. When he rushed to pick the injured he fainted. Mukeem’s left arm, separated from his body, lay a few feet away. His abdomen was torn apart.

The injured were rushed to a nearby hospital on motorcycles, in load carriers and whatever vehicle was available. But three died within minutes. Other people died either on the way or in the hospital.

Son of a farmer, Mukeem was a bright student and had secured a distinction in his class 10th exams. “He was interested in humanities and math,” his brother Adnan, told News18, his voice breaking down and tears rolling down his face. “He would cherish dreams about studying sociology in Aligarh Muslim University.” 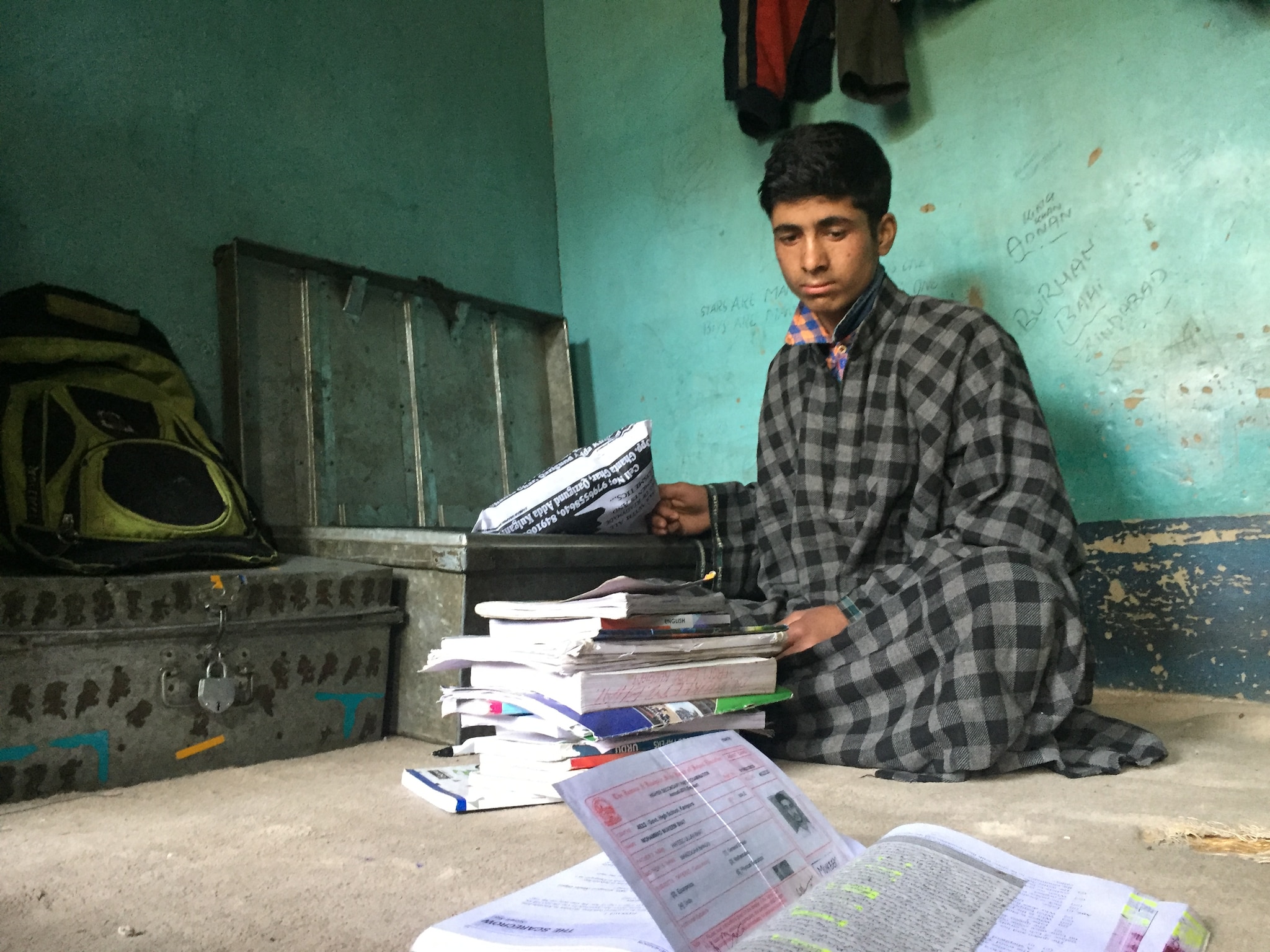 In the corner on the room is a moldy metal trunk in which he would keep his books and belongings. The wall around is scribbled. He had written the date (13/6/2018) on which he got new shoes, and noted rates of some books. There was a quote — 'education is most powerful weapon'. The name of Burhan, the Hizbul Mujahideen militant commander who was killed in 2016, was also scribbled at one place. The rest of the wall was full of quotes and poetry. 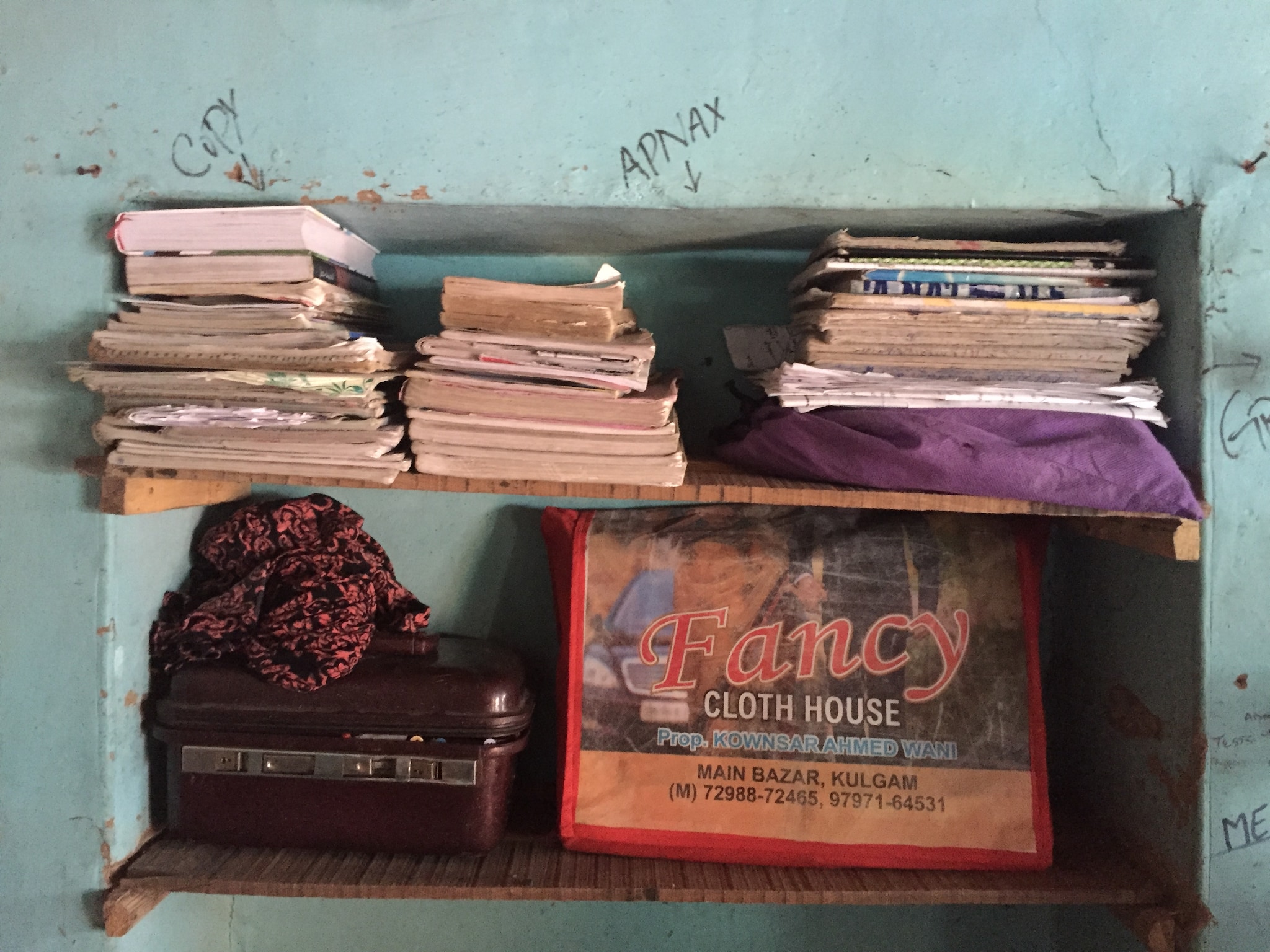 Adnan opened the trunk with trembling hands and pulled out a bag. He unfolds clothes. “He got new clothes only yesterday”—a blue jeans, white shirt and a blue pullover. “My brother was excited about exams and he always wanted to look good. The day before he would wear them and keep going to the mirror,” Adnan said, hugging the clothes and sobbing.

Another civilian who died soon was Talib Maqbool Laway. The house of Laway’s has been full of tragedies. Talib, who lives just a hundred meters away from the site where gunfight took place was supposed to be appearing for his exams in the very moments when he died.

It was last paper of the 18-year-old student of government degree college Kulgam. Talib was two-years-old when his father set himself ablaze as their house was pulled-down in road widening.

His mother Naseema, 40, working as Aanganwadi worker raised him and his sister, with meager income and help of relatives. “Besides studying he used to work as laborer for the past four years,” Naseema said. “He used to take care of studies on his own and would also help me. All my hopes are shattered. Why don’t you kill me as well,” Naseema wailed, surrounded by equally inconsolable women. All the seven people who were killed were from Laroo and other surrounding villages.

There are over dozen people, mostly young who are in different hospitals with serious injuries. “The situation is like a war zone,” a doctor who performed multiple surgeries told News18.

The killing of the civilians has left people shocked and angry and Kashmir witnessed complete shutdown on Monday. All the exams scheduled for today have been postponed and schools and colleges remained off.

The case has been registered, police said and an investigation has been initiated. Civilian killings at encounter sites in Kashmir have increased with alarming frequency in recent months.

Former chief minister of the state Farooq Abdullah while reacting to the incident also said that such incidents have become "a norm" and called for "immediate de-escalation from all sides".

Forces use explosives during the encounters with militants and most of the times the house in which they hide are destroyed.

In the last fifteen years, as per the human rights groups, over one hundred people, mostly children, have died due to the explosions ‘leftover’ shells.

Owing to such incidents, in 2011, the forces were asked by governed to maintain SOP (standard operating procedure) for “avoiding the loss of human life after IEDs remain undetected owning to non-clearance of debris at encounter sites.”

Reacting to the outrage over the death of civilians from the explosion, the army issued a statement claiming, ‘As the forces began to evacuate the area after the encounter, many local residents marched to the site which was yet to be sanitized. Seven civilians died and some more were injured when an unexplored ordinance (UXO) belonging to the militants went off on the encounter site.’

The statement added, ‘The death and injuries occurred due to the blast as civilians rushed into the incident site against the standing operating procedure of local Army units. The Army as a drill completely sanitizes the area before permitting any movement of man, animals or even vehicles there. There is need to curb this rush towards incident site and let Army complete the sanitization process.’
Tags: