Policemen and tribals were locked in a stand-off in Jharkhand's Ghagra village after the rapes. (Photo: News18)

Police has laid a heavy security cordon of some 950-1,000 policemen outside the Ghagra village, just 30km from Ranchi, to force tribals to surrender the three kidnapped policemen and their arms.

A little known tribal district, 30km away from the Jharkhand’s capital Ranchi, has become a flashpoint between the state's tribals and its police. Thousands of policemen and tribals have been locked in a standoff in Ghagra village since Tuesday night.

The death of a tribal in a stampede-like situation on Wednesday after police tried to force entry into Ghagra village and fired tear-gas shells has further escalated tensions. Khunti and areas around it have been put on high-alert.

Tensions rose in the area last week. On June 19, five tribal women working with an NGO were abducted by six men, taken to a nearby forest area and gang-raped.

Police has since connected the gang-rapes to the ongoing seclusionist movement called 'Patthargarhi' that has become a rage in the tribal belt in central India across Jharkhand, Chhattisgarh, Madhya Pradesh and Odisha.

Tribals have claimed that the gang-rapes were not committed by them but by members of anti-Naxal militia, and are angry at police action against their members. 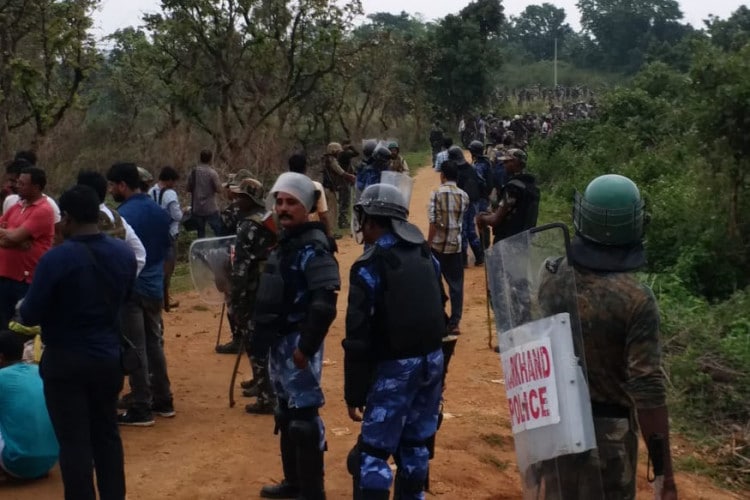 Police has laid a heavy security cordon of some 950-1,000 policemen outside the Ghagra village. (Photo: News18)

For a week after the gangrape, the police did not even reach the crime scene, fearing backlash from the Patthargarhi supporters.

Finally on Tuesday, the police raided the village where the alleged masterminds - Yusuf Purty and John Jonas Tidu – were ensconced, but they were reportedly whisked away and the raiding party was blocked by villagers.

At the same time, some villagers in Khunti were preparing to inaugurate a symbolic stone outside the village Ghagra, to declare that it was a part of the Patthargarhi area in which tribals claim self-rule.

Police prevented the entry of locals at the ceremony, which angered the tribals who attacked the police. The symbolic stone installed outside villages to declare that they are a part of the Patthargarhi area in which tribals claim self-rule. (Photo: News18)

Angry tribal villagers then marched down to the house of the local BJP MP Karia Munda's residence at Anigada-Chandih and abducted three policemen who were posted at the parliamentarian's house for security. The INSAS rifles belonging to these abducted policemen have also been missing since.

Police has since laid a heavy security cordon of some 950-1000 policemen outside the village to force the tribals to surrender the three kidnapped policemen and their arms.

However, sources say that the tribals are understood to have whisked both the policemen and the guns away to another unknown location.

The state administration is caught in a catch-22 situation where it cannot give in to the demands of tribals and be seen as weak at a moment where three of its policemen have been taken hostages.

And other the other hand it cannot act tough considering that the entire population in Khunti is tribal and has become increasingly polarised against the state administration through its Patthargarhi drive.

The main Patthargarhi leader Joseph Purti is believed to be on the run.

This is not the first time that security forces have suffered violence at the hands of local tribals.

In August last year, over 100 policemen, including Khunti Superintendent of Police and 50 CRPF personnel, were held hostage for 12 hours by thousands of angry Adivasis after police forces tried to remove barricades put up by the locals to regulate the movement of people in Kanki — a Patthargarhi village. The security personnel were let go only after the intervention of the area deputy commissioner and DIG.