How Kashmir Lived Through the 365 Days Since Burhan Wani's Death

File photo: A masked demonstrator pulls a burning tyre during a protest after Eid al-Fitr prayers, in Srinagar.(Image: Reuters)

To try and understand this free fall that Kashmir has been in for the last one year, we have tried to sketch a timeline of a few significant dates beginning from July 8 last year.

The past 365 days were unlike anything that Kashmir has lived through, in a very long time. Since the day Hizbul militant Burhan Wani was killed by security forces, on July 8, the valley has practically been on the edge. It has been witness to some very grotesque violence - the abduction and murder of a local army officer, mob lynching of a senior police officer. Kashmir has also seen some ruthless means of crowd control – hundreds being blinded by pellet guns and a local being tied to an army jeep for over five hours being cases in point.

Pakistan reportedly orchestrated a cross-border attack that left 18 Indian army soldiers dead. India in return carried out 'surgical strikes' across the border. Representatives of both sides engaged in an intense diplomatic tug-of-war, while militants in Kashmiri hinterland kept the fires burning.

To try and understand this free fall that Kashmir has been in for the last one year, we have tried to sketch a timeline of a few significant dates beginning from July 8 last year. In these dates one may find clues to explain Kashmir’s present and foretell its future.

This is the month when full-scale protests, the scale of which was last seen only back in 2008 and 2010, were launched after the death of militant commander Burhan Wani. This was also when after their shelters were attacked, Kashmiri Pandits fled the valley.

On July 8, based on a tip-off a team of Rashtriya Rifles, CRPF and local police, cordoned off a village in South Kashmir’s Kokernag area. Three militants were holed in it, all of who were killed within minutes.

It was while they were trying to identify the slain militants that the forces realised that one of those whom they had gunned down, was Hizbul Mujahideen commander Burhan Wani.

He had carried a reward of Rs 10 lakh on his head and reportedly coming down from the forests of Tral for Eid celebrations. The overwhelming turnout at his funeral in Tral was often compared to the dismal turnout at the then Chief Minsiter Mufti Mohammed Syed’s funeral meet held in January.

Reports of Wani’s death triggered protests across the Valley. Several rounds of funeral prayers were held for him in-absentia across the valley.

On July 9, one policeman died when a mob attacked and pushed his mobile bunker into the waters of Jhelum river.

On July 12, close to 200–300 Kashmiri Pandits fled transit camps in Kashmir after being attacked by protesters.

Cut to July 15, curfew was imposed in all districts of Kashmir and mobile phone networks were suspended. Separatists called for shutdown till July 18. By July 26, the law and order situation got better and curfew was lifted, except in Anantnag. Three days later, on July 29, violent clashes broke out in various parts of Kashmir. Over 130 people were reported injured.

This was a month marked by several attacks on political leaders and ground workers. As a result of which a lot of members, especially of PDP, fled to the state capital Srinagar, for safety.

On August 1, the house of state education minister Naeem Akhtar residence was bombarded with petrol bombs. It was to be the first of many attacks on political leaders and ground level political workers in months to come.

On the same, cavalcade of Law and Rural Development minister Abdul Haq was attacked with stones. On the same day, mobs pelted the vehicle of the Additional Deputy Commissioner (ADC) of Ramban with stones and set it ablaze on the national highway near Lethpora. Two protesters were killed in defence by a Personal Security Officer of the ADC. As the Valley continued to boil, separatists declared curfew on August 5. Three people were killed and over 670 injured that day.

On August 15, protestors hoisted Pakistan flags at various places in Kashmir. The very next day, five protesters were killed in firing by a security personnel.

A youth was killed on August 21 after being hit by a teargas shell in Srinagar while over 70 people were injured in protests across the region. Massive rallies against India were held in several regions of South Kashmir.

Three days later, another youth died after being injured in clashes with security forces, while 9 policemen were injured when a grenade was lobbed at them from a crowd of protesters in Pulwama.

On August 31, a police quarters and Rajya Sabha member of PDP, Nazir Ahmad Laway’s house were set on fire by protesters in Hanad Chawalgam of Kulgam district.

This is the month when tensions between the two neighbouring countries rose to feverish pitch. Attacks on army base were retaliated with ‘surgical strikes’, pitched clashes were fought between protesters and forces, and reports of schools being ‘mysteriously burnt’ started to appear. On September 2 curfew was reimposed in including Srinagar, Badgam, Ganderbal, Bandipora and Handwara.

On September 4, over 600 people were reported injured in a clash between security forces and locals. A day later, another youth who was injured previously succumbed to his injuries. Protests erupted after that too and the shutdown was repeatedly extended by the separatists into October.

On September 16, another protester who was injured succumbed to death while 50 others were injured in Dooru village Sopore.

The worst time was around Eid-al-Adha when for the first time in 26 years, congregations were also barred from being held at the Eidgah and Hazratbal Shrine.

On September 17, the pellet-ridden body of an 11-year-old boy, who went missing in protests a day before in Harwan, was found near a stream at Dachigam National Park and had been hit by pellets.

On September 18, in one of the deadliest attack on Indian army, 19 soldiers were killed by militants at army’s base camp in Uri. India alleged that Pakistan had monitored and closely coordinated the attacks.

Almost 10 days later on September 29, Indian army conducted ‘surgical strikes’ against militant launch pads across the LOC. It was a claim that Pakistanis were to vehemently deny.

Special Indian forces destroyed several ‘terror launchpads’ and inflicted ‘significant casualties’ on terrorists and ‘those supporting them across the Line of Control’.

After months of shutdown calls by separatists and a more-or-less peaceful law and order situation, towards the end of the month, a clash between security forces and protestors led to the death of 3 civilians and 20 others were injured.

This month was marked by a historically low voter turn-out, of civilian killings on election day and by a man Farooq Dar being tied to a jeep for five hours and taken around several villages.

A by-election for Srinagar Lok Sabha seat was held. Amid calls of a boycott, voters turned up but not before clashes, on April 9, led to 8 civilian deaths and over 170 injuries.

A video, said to be shot on April 9, showed a thickset man sporting a beard, identified as Farooq Dar, been picked up by an Army contingent that wanted to enter Beerwah village with polling staff.

Dar claimed he was tied to a jeep and taken around 10-12 villages at the head of the convoy, which included vehicles with security personnel and polling staff, before being let off.

Clashes erupted between security forces and students after they took out a protest march against the alleged highhandedness of security personnel at a college in Pulwama in south Kashmir, the police said.

This was perhaps the most eventful month of the year. Elections were for the first time in many years cancelled, a local army officer was abducted and killed, and Hizb militant Burhan Wani’s close aide Sabzar Bhat was killed in an encounter.

On May 2, for the first time in several decades, the state election commission, after a long deliberation with the Union Home Ministry, decided to cancel bypoll in South Kashmir’s Anantnag district.

On May 9, Lt Ummer Fayaz Parry, a resident of Kulgam, was picked up by four militants from to Herman Shopian and later taken Chowk where he was shot.

Days later, on May 27, Hizbul militant Burhan Wani’s aide Sabzar Bhat was gunned down. He was reportedly being considered as a replacement for Zakir Musa who had reneged from the Hizbul ranks. This was a big blow for local militancy in Kashmir.

On June 23 DSP Ayub Pandith was lynched by a mob late on Thursday after he opened fire on a group of people who caught him clicking pictures near a mosque in Nowhatta area of Srinagar.

The incident reportedly occurred while separatist leader Mirwaiz Umar Farooq was offering prayers at the Jamia Masjid and was to make a speech later.

Two militants holed up in DPS Srinagar school were killed on June 25 after a 14-hour encounter with security forces. Two army men were also injured in the shootout. 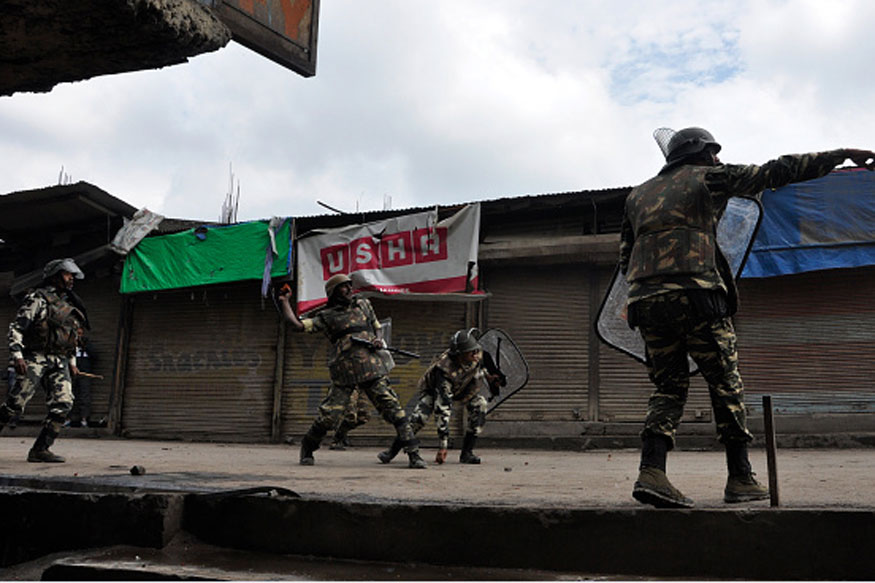 The militants had killed a CRPF jawan and injured a constable a day before, following which a gun battle broke out at Pantha Chowk.

Security forces launched a search operation in Bahmnoo area of Pulwama on July 3 following information about presence of militants there. Three militants, including wanted Let commander, Bashir Lashkir were killed.