The twin villages of Peda and Nayagaon, both on the outskirts of Bijnor, were on the edge with communal tensions rising.

Several BJP leaders, including Prime Minister Narendra Modi, had claimed that the Samajwadi Party government in UP was “unfairly framing innocent people” in the Peda clashes case.

Bijnor: Rajiv Singh sits outside his house in Nayagaon village and points to a cart stacked to the top with sugarcane. “Uska hi bhara hua ganna hai yeh (He had filled this cart with sugarcane himself),” he says. Rajiv is referring to his 17-year-old nephew Vishal Kumar, who was murdered on late Friday night when he had gone with his father Sanjay Singh to water their sugarcane fields in Bijnor.

For the second time in less than six months, the twin villages of Peda and Nayagaon, both on the outskirts of Bijnor, were on the edge with communal tensions rising. On late Friday evening, Sanjay Singh and his son had gone to water the fields when a dozen men, allegedly belonging to another community, attacked them with knives and guns. The son, 17-year-old Vishal Kumar, was killed in the attack while trying to protect his father.

Police was deployed in Peda and Nayagaon villages and communal tensions were high. Leading the protests were local BJP leaders, who demanded the arrest of all the accused. According to the police, an FIR was filed against eight residents of neighboring Peda village and one of them, Mohammed Hanif, was also arrested. On Saturday afternoon, while 15 districts in western UP were heading to polls, BJP workers blocked one of the main crossings in the city for five hours and demanded “Justice for Vishal”. Traders, too, downed their shutters in protest. That is when Vishal’s family realized the situation could get out of control.

“Some people who were protesting were asking us to bring Vishal’s body on to the main crossing so that we could all protest together. When I went out, I noticed that the crowd was getting aggressive. In fact, a couple of people in the crowd were even drunk and started shouting expletives at the other community. We realized that the situation could soon get out of control. We decided to just go back home instead of joining the protest. If we had gone there with Vishal’s body, passions would have erupted and there would be riots in Bijnor. I am glad that better sense prevailed over our family. We don’t want any more bloodshed,” Rajiv Singh says.

The timing of the murder, just five days before Bijnor goes to polls in the second phase and the night before the first phase, has raised eyebrows in the village. While Sanjay Singh, 42, had contested the village panchayat elections in 2015 and lost by a narrow margin of 18 votes, his family claims that they do not have any links with any political party whatsoever. Subhash Singh, Sanjay Singh’s cousin, says, “We don’t want anything to do with politicians or politics. When the matter is being handled by the police at the moment, what need do politicians have to derive mileage out of this? We just want justice for our child and we have faith that we will get it. We don’t want enmity with any particular community. We just want the truth. Till now, we don’t even know why our child was murdered.”

In September last year, the alleged eve-teasing of girls in Peda village on the outskirts of Bijnor city had triggered communal riots, claiming three lives and injuring 12 others. Chief Minister Akhilesh Yadav had rushed state home secretary Mani Prasad Mishra and ADG (law and order) Daljeet Chaudhary to the spot and announced Rs 20 lakh each to the next of the victims’ kin. Seven companies of the PAC and additional police forces were deployed in the area. Two days after the clashes broke out, police investigations revealed that Aishwarya Chuadhary, the district president of the RSS-affiliated Adhivakta Sangh, had been accused of leading the violence. 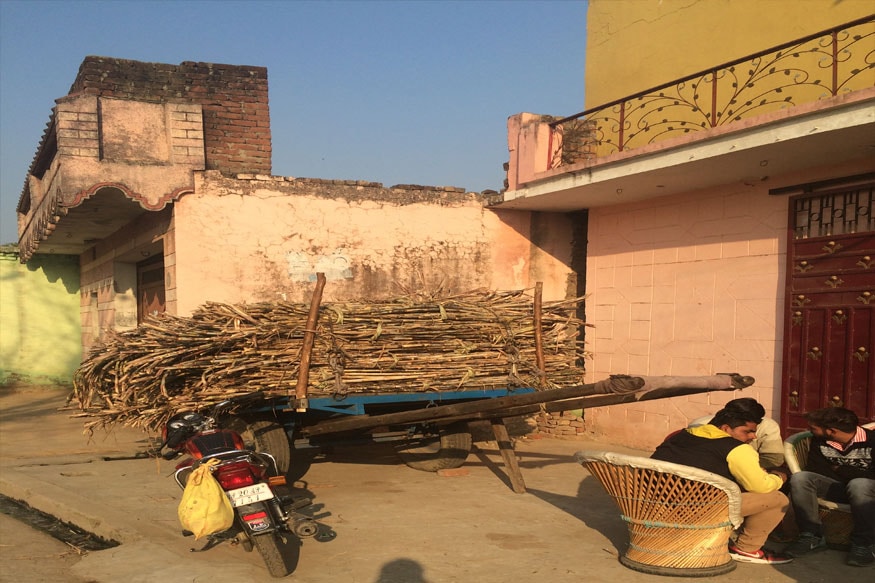 Statements of the accused, police had said, named both Chaudhary and his gunner. According to reports, the violence had died down after an initial flare up but Aishwarya Chaudhary had instigated the mob to return and fire upon members of the other community. Cops also recovered evidence, including pictures of Chaudhary at the scene. Interestingly, Chaudhary’s wife Shuchi Chaudhary is the BJP candidate for the Bijnor assembly constituency.

Several BJP leaders, including Prime Minister Narendra Modi, had claimed that the Samajwadi Party government in UP was “unfairly framing innocent people” in the Peda clashes case. Just days before Bijnor heads to polls on February 15, local BJP leaders will be looking to make an issue out of Vishal Kumar’s murder. As Sanjay Singh was recuperating in Bijnor district hospital on Sunday, he received a visit from Bijnor’s BJP MP Bharatendra Singh. As Sanjay is about to go back to sleep, the MP says, “Koi pareshani ho toh phone kar dena (If you face any problem, just give me a call)”. Speaking to News 18 later, the Bijnor MP denied that the allegations that his party was trying to polarise voters ahead of the second phase of polling. “This is a peace-loving district. Even when India was being partitioned in 1947, Bijnor saw no violence. Unfortunately, such incidents only take place when the Samajwadi Party is in power. When Mulayam Singh Yadav was CM, the city witnessed a near-riot situation. During Akhilesh’s tenure, too, there has been communal tension. The credit goes to the people of Bijnor for maintaining peace in the city.”

Meanwhile, Rajiv wonders why anybody would attack his nephew. The family still doesn’t know the motive behind the attack. “Bahut achcha ladka tha. Gaon mein sab ko Ram-Ram karta tha. Aakhiri samay mein bhi pitaji ki jaan bacha gaya. Usko koi kyun marega? (He was a very nice boy. He used to greet everyone in the village. Even in his final moments, he saved his father’s life. Why would anyone ever kill him?)