The protest site at the iconic Clock Tower in Lucknow's old quarters was decorated on Sunday with tricolour flags and balloons with patriotic songs being played in the background.

At the Clock Tower in Lucknow on Sunday.

Lucknow: A large number of women protesting against the amended Citizenship Act at the Ghantaghar (clock tower) in Lucknow hoisted the Tricolour and read out the Preamble to the Constitution on Republic Day.

The sit-in, mostly by Muslim women, at the iconic Husainabad Clock Tower entered the 10th day amid heavy police deployment.

On Sunday, the protest site in the capital's old quarters was decorated with tricolour flags and balloons with patriotic songs being played in the background. 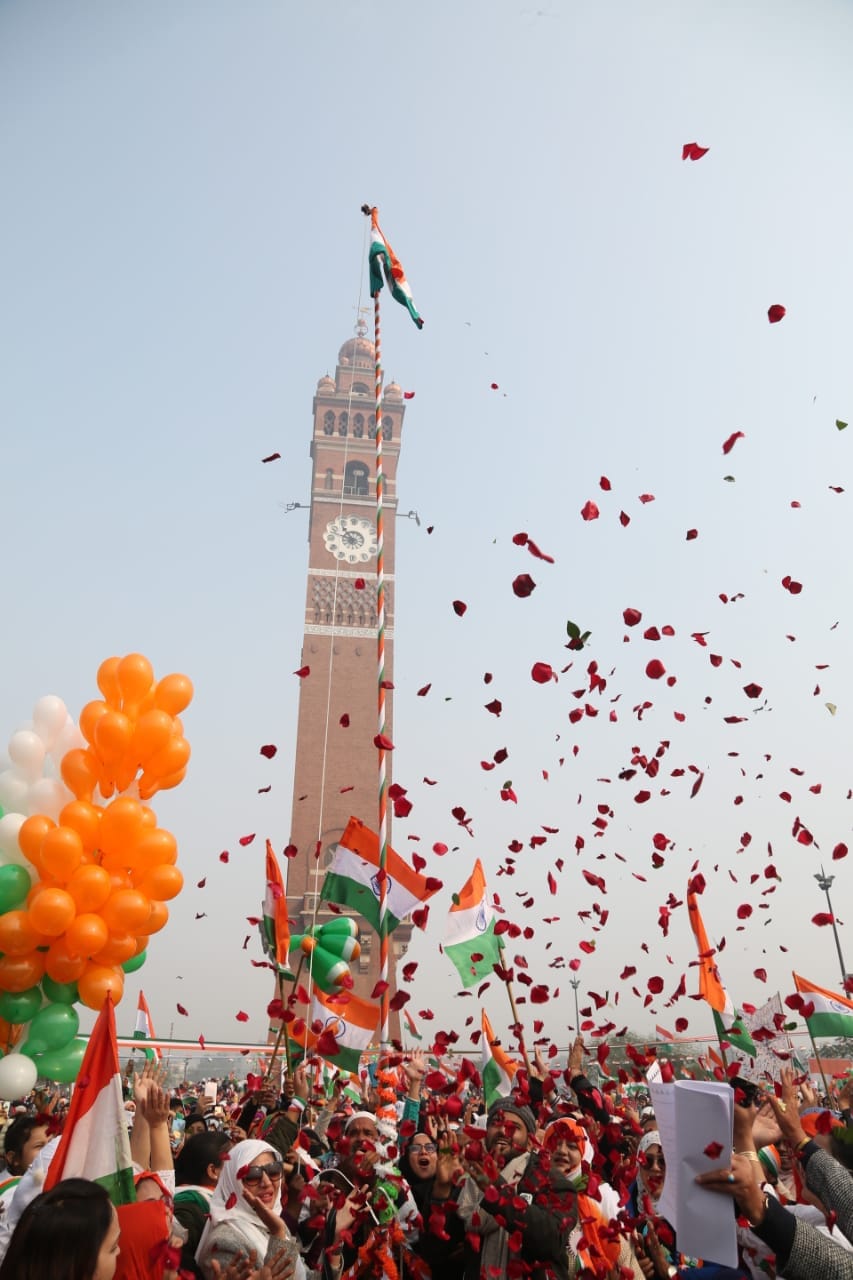 (Women celebrate at the Clock Tower in Lucknow on Sunday)

Former vice chancellor of Lucknow University and renowned social activist Professor Roop Rekha Verma hoisted the Tricolour on the occasion. “It is a historic moment when people from across faiths have come together in such a way,” she said, while condemning the police action on peaceful protesters.

Meraj Haider, a protester, said,"The day started with the hoisting of the flag at Ghantaghar (Clock Tower), which was followed by the rendering of songs by those gathered there. The preamble to the Constitution was also read out."

He said it was a unique day as people from different walks of life gathered at Ghantaghar in large numbers to protest against the CAA and NRC.

Women sang the National Anthem and a number of other patriotic songs and wished everyone present on the occasion even as they continued to speak out against the against the controversial citizenship law and proposed implementation of the National Register of Citizens for the last few days.

The daughters of noted poet Munawwar Rana, who have been booked by the Lucknow Police for taking part in the protests, were also present at the spot. Renowned poet Imran Pratapgarhi also who came to the site and extended his solidarity with the protesting women.

Rajiv Yadav, a member of the Rihai Manch that backed the protest, said the agitation against the CAA-NRC-NPR at the Ghantaghar have assumed an artistic dimension.

"Seven girls made a banner, which shows footsteps in different colours converging on the centre in protest against the CAA-NRC-NPR," he said.

On Saturday, the Uttar Pradesh Police had arrested 10 people, including a woman, from Ghantaghar.

Meanwhile, a woman at the sit-in said the authorities were keeping all nearby toilets shut and switching off electricity to demoralise the protesters.

“There is also a vigil on the movement of our family members and families. Some people have brought allegations of funding against the protesters. I want to tell them that our families stand with us firmly and along with them, the common people, and they are extending all possible help to us,” she said.

The secretary of All India Muslim Personal Law Board and senior lawyer Zafaryab Jilani, who came to Ghantaghar on Sunday afternoon, lauded the women for continuing their stir in the face of extreme weather conditions and alleged clampdown by the authorities.

The anti-CAA stir at the site is on since January 17 even as over 100 women protesters have been booked for violating prohibitory orders.

"Apart from this, eight persons have been arrested. They are Puja Shukla and seven male volunteers," Thakurganj police station SHO Pramod Mishra had said on Saturday.

Another protest against the CAA and NRC is underway by local women in the Gomti Nagar area since the last few days. Here too, the Tricolour was hoisted on Sunday. About 125 woman from the area have been booked since they began their protest.

The indefinite protests by women are on the lines of the agitation at the national capital's Shaheen Bagh against the CAA and NRC that has been going on for over a month now.

Besides Delhi, protests have unfolded in several parts of the country over the law since it was passed on December 11 by Parliament and have led to clashes at several places, including Uttar Pradesh, where nearly 20 people died last month.

According to the amended law, members of Hindu, Sikh, Buddhist, Jain, Parsi and Christian communities who have come from Pakistan, Bangladesh and Afghanistan till December 31, 2014, due to religious persecution there will not be treated as illegal immigrants but given Indian citizenship.