London: Great timing. Quick bat-speed. High back-lift. These and many others are common terms one would come across while listening to commentary in any cricket game. These terms now have quantifiable numbers attached to them with technology getting deeper into the game.

One would recall technological innovations in the Champions Trophy 2017 revolving around bat sensors that, when placed on the top of the handle, will measure the player’s back-lift, bat speed and follow-through. Plenty of players, including the likes of Aaron Finch and David Warner, tested the device live during the Champions Trophy.

“The importance of data, and democratising data, is a big part of what we’re doing. There is a lot of self analytics that young players can do. Not everybody can have access to cameras and professional video analysts. Even if a small kid can see his game in the mobile phone, it adds value,” Atul Srivastava, the founder of Batsense, told Cricketnext.

“It started about three years back. We did market research on cricket equipment and realised that the whole market is around 250 million dollars including bat, pad, glove etc acorss the world. The industry is growing at a rate of 3%, which is a low pace. I thought there must be something wrong because cricket was growing rapidly – broadcast revenues, player revenues…everything is going up.

“I wondered what changes in cricket equipment. Nothing much, apart from the colour of the sticker, the stitch on the gloves and pads. There’s nothing that’s adding value for somebody to give more money. Then I started to look at which equipment I could make smart first. More than 60% of the market in equipment is the share of the bats. If you go to any sports shop, you’ll see cricket bats lined up on display. So we chose bat first.

“But where do you put the sensor? People are trying to put devices on the back of the bat or drill it in. But I never wanted this to be a toy, not just a training tool. I want it to be a weapon for wherever the player is playing. Everybody knows how many balls Sachin Tendulkar has played in his international and first class career. But nobody knows how many balls he has practised. Imagine if he had this device, he’d have known that too.” 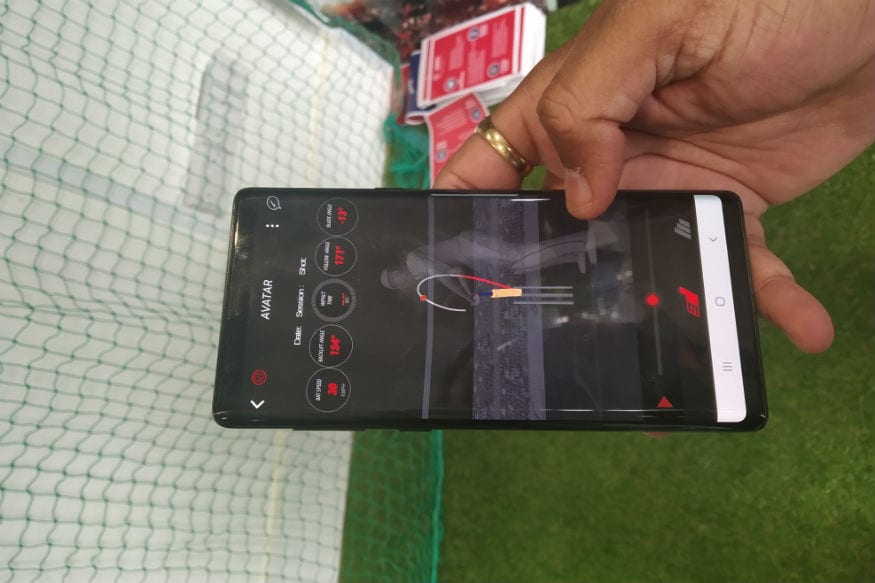 One common sight around The Oval on Thursday during the World Cup opener was kids testing the technology, swinging the bat wildly before eagerly peeping into the App to ‘analyse’ their swing.

“When a commentator says ‘great sound off the bat’, it means timing. But what’s the number to measure it? What’s the speed at impact? Is it the maximum speed? These are the numbers we’re creating,” says Atul.

“After every session, it gives you a wagon wheel. If you look at it every day and notice you’re playing, say, 70% shots on the leg side, there could be a problem with the grip.

“For every shot, it gives you parameters like back-lift angle, angle at impact, wagon wheel, speeds from start to end of swing, whether your speed was maximum before or after impact. If it was maximum during impact, it means you’ve timed it perfectly.”

With analytics becoming an integral part of the game at the higher levels, bat sensors could be a starting step to spread the benefits of visual analysis to the lower levels.

“I’m not saying this is the end of it all, but we have a starting step. We are trying to create a helmet sensor and shoe sensor, which will help us triangulate data, and give a full animation of your motion whether it’s head, bat or footwork. That will complete the batting side,” says Atul.

But what about the bowlers?

“We’re also working hard to put a ball sensor. That will complete the cycle of making equipment smart,” he says, before explaining the challenges. “Putting a sensor on the ball is the difficult part, because a ball gets into a 900 degree oven during its making. But we’re looking to solve that. Once that’s done, the sensor can be fit into the ball, and get charged automatically with motion like in a dynamo. Sensor on ball needs lots of approvals too. It will take some time.”