Home » News » India » In 50 Years, Sunderbans and Bengal Tigers May Vanish. These Bangladeshi School Kids Are Showing India How to Save Them
6-MIN READ

In 50 Years, Sunderbans and Bengal Tigers May Vanish. These Bangladeshi School Kids Are Showing India How to Save Them

The tiger scouts of Bangladesh have excelled in convincing numerous villagers to give up detrimental practices such as bushmeat hunting, unsustainable fishing practices and spearheaded mass sensitisation programmes.

Bristling with enthusiasm and armed with a depressingly lucid understanding of the risks that climate change poses to their home, school children from Bangladesh are proving themselves to be potent weapons in the fight to save the Sundarbans – the last bastion of the Bengal tiger in West Bengal.

The Sundarbans, in south coastal Bangladesh and Bengal in India, is the last surviving mangrove habitat and a key stronghold for the endangered species. Perfectly adapted to live in the mangrove ecosystem that spans across 10,000 square kilometre, the population of tigers was found to have increased 26 per cent in the Indian part of Sundarbans in a recently concluded survey by the government. At the same time, reserves in north Bengal like Buxa were found to have no tigers.

But that might soon change. A recent study had a grim prediction for the the mangrove area and its tigers, warning that “due to the combined effect of climate change and sea-level rise, there will be no suitable Bengal tiger habitat remaining in the Sundarbans by 2070".

Because of its geographic location, the Sundarbans have long been at the forefront of climate change related events, with changes in the vegetation already taking place at the delta. With the average elevation just a meter above sea level, the forests are especially vulnerable to sea-level rise.

But the school kids have other ideas.

“Individuals use five thousand to eight thousand rupees of oxygen every day, which they receive for free from the nature. But in return, we give pollution, plastic and chemical filth to nature. Why can’t we change into humans who give back something good to nature,” asked Siamon Bawati, an eighth grader from Bangladesh, to his counterparts across the border.

He is one of the teenagers who have been trained as “tiger scouts” by Bangladeshi organization Wild Team, to become a future conservation leader and spread messages of conserving the tigers and its habitat through small community events and social activities.

The Wildlife Trust of India, which is working as a part of the International Union for Conservation of Nature (IUCN) funded Integrated Tiger Habitat Conservation Programme (ITHCP) in the area, brought the school kids to meet their Indian counterparts over a period of three days to share their experiences of living with tigers. Among those listening to the school kids in rapt attention were not just other school students from India, but also teachers, various forest department officials including the deputy field director (DFD) of the Sunderbarn Tiger Reserve, Deepak M, and the division forest officer of the district, Santosha GR.

“The younger generations needs to wake up and take the reins in their hands and change things around themselves…so that the Sunderban…the only mangrove tiger habitat in the world can be preserved for generations to come,” the latter said.

Mayukh Chatterjee of the Wildlife Trust of India (WTI) told News18 that the ITHCP project is trying to understand the different conservation initiatives being implemented on both sides of the border, to see what works and why, and finally to see if those ideas can be replicated.

“What is great about the school kids, is that they’re using themselves as weapon in the fight to save the Sundarbans and its tigers. These kids have been trained since 2016. They know the science and stakes…and they’re not normal kids. They are taking it upon themselves to change their neighborhoods and those they interact with,” he said.

Chatterjee, who heads the WTI’s human-wildlife conflict mitigation division, said that these school kids had a wealth of case studies to draw upon, many of them from their own personal experiences. “They interact with other villagers, who might be middle-aged or older and they said that initially they might have been irritated to have these kids come to their basha (home) and tell them about the importance of the tiger and the Sundarbans. But after a point, everyone relents…who will fight with kids?”

He added that during their earlier visits toSundarban in Bangladesh, time and again, he heard the refrain from residents in the ecologically fraught mangrove forests, ‘If the kids are saying it, it must be true.’

From September 12-14, the three-day event was organized by the WTI, along with the Lokmanta Rani Rashmoni Mission (LRRM) in collaboration with Wild Team and the state forest department.

Of all tiger habitats, Sundarbans have consistently confounded scientists due to the large number of tiger attacks on humans, adding another layer to the already complicated conservation scenario at the mangrove forests.

Over the past centuries, different theories have been put forward by scientists, ranging from behavioural changes in the big cats from drinking salty water to links to excessive aggression since the tiger’s territorial markers are washed away by the tides.

But two factors remain consistent: that the tiger attacks have been increasing as human populations rise and the forests shrink, and that the economically and socially vulnerable communities are increasingly dependent on the forest for resources, ranging from honey to prawns. 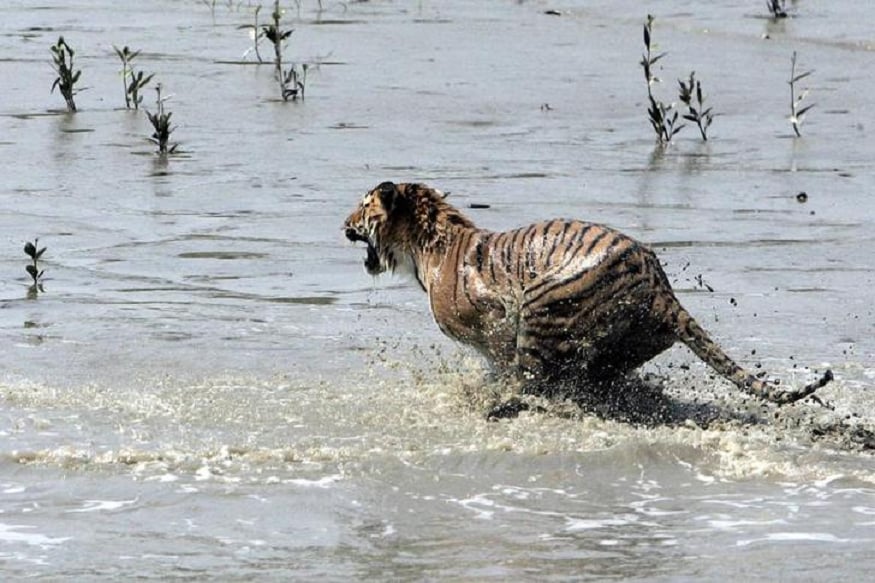 With the average elevation of Sunderbans just a meter above sea level, the forests and its tiger population are especially vulnerable to sea-level rise. (Photo: Reuters)

Nasir Uddin of Wild Team said in a statement: “Several of the tiger scouts of Bangladesh have excelled in convincing numerous villagers to give up various detrimental practices such as bushmeat hunting, unsustainable fishing practices and have also spearheaded mass sensitisation of rural children in their respective villages.”

An official of the West Bengal forest department explained that fencing of the mangrove forests had stopped the tigers from foraying into human habitations, greatly reducing conflict – but those who entered the forests illegally were often at risk.

“Take bush meat hunting…when you hunt a deer, you are also killing a prey for the tiger in an area where prey density is very low. And at the same time, you put yourselves at risk,” said the official.

“This transboundary event was the first step to replicate similar efforts on the Indian side of the Sundarabans by getting this select group of eight tiger scouts from Bangladesh share their experiences and efforts with rural school children of Indian Sundarbans. This works to motivate school children immensely so they can also take up similar initiatives in time in Indian Sundarbans,” said Krishnendu Basak, who is in charge of the transboundary project.

A key problem is that of alternative livelihoods. With nearly all the attacks, on the Indian side, taking place inside the forest, Chatterjee said the focus needed to be on providing the local population living alongside the tigers in the mangrove area with economic reasons to not go into the forest.

“This has to be done gradually, by slowly building their capacity. We have begun doing this, by looking at those who are the most economically vulnerable and we have seen positive results…in just the first year, the beneficiaries are spending nearly 40-60 percent less time in the forest,” he said.

This story is part of Covering Climate Now, a global collaboration of more than 250 news outlets to strengthen coverage of the climate story.
Tags