Sulabh has chosen Marora to construct toilets for 180 families and decided to give it Trump’s name to mark Prime Minister Narendra Modi’s first official visit to the US.

When Saroj, 20, and Rukhsaar, 18, returned home to their village, Marora, from computer classes in the nearby town Nuh, they were greeted by the most unusual sight of Donald Trump, the President of the United States of America, beaming at them from a massive board erected at entry of the village.

Mewat: When Saroj, 20, and Rukhsaar, 18, returned home to their village, Marora, from computer classes in the nearby town Nuh, they were greeted by the most unusual sight of Donald Trump, the President of the United States of America, beaming at them from a massive board erected at entry of the village.

On June 23, Sulabh International, a nonprofit group known for building toilets all over India, dedicated the three villages of the Marora gram panchayat, in Mewat, Haryana, to Trump; calling them ‘Trump Sulabh Village’. 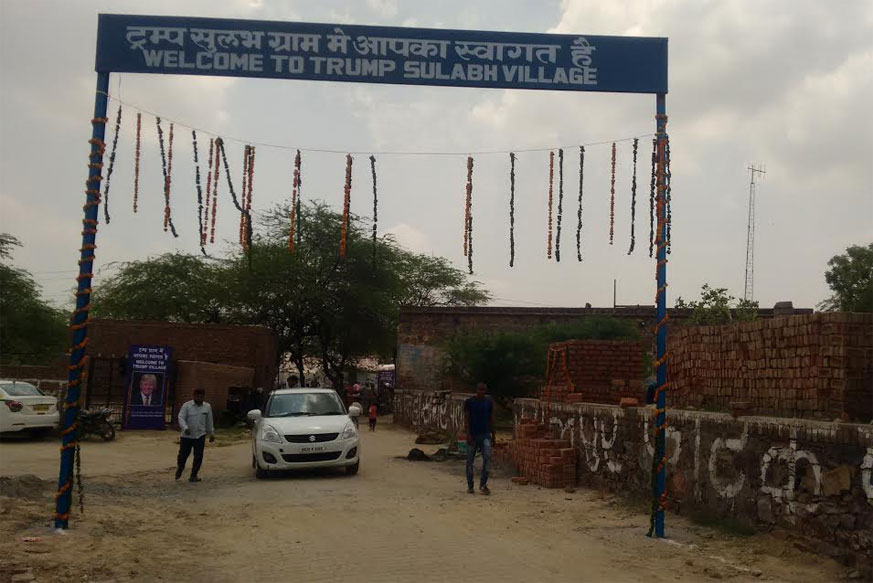 Sulabh has chosen Marora to construct toilets for 180 families and decided to give it Trump’s name to mark Prime Minister Narendra Modi’s first official visit to the US after Trump became President in January this year.

“We had no idea this programme was going on,” said Saroj, as she and Rukhsaar looked on, part amused, part excited at the swarm of reporters that had descended on Marora. “We left at seven in the morning and these new boards were covered by a black cloth. We didn’t know what they said.”

They came back to three boards at the village’s very entry — a signpost, a poster bigger than a man’s frame, and large square arch gateway signage — announcing the Trump Sulabh Village. In case anyone didn’t get the message, a few more posters had been propped up around Marora, along with garlands decorating the freshly begun toilet constructions.

On the day of the last jumma of Ramzan, when all of Marora had taken off from work — Mewat being populated largely by Meo Muslims — it was hijacked into shouting slogans for Trump. “When Pathak Ji comes on stage, you all have to stand up and shout Trump Zindabad,” one organiser instructed the crowd, while they waited for Dr. Bindeshwar Pathak, the founder of Sulabh, to inaugurate the toilet construction. When the time came, no one really said zindabad despite the prompts, as no one really knew who Trump is.

“Woh America ka koi hai (He is someone from America),” was the most common answer, along with sheepish grins, while many villagers asked the reporters if the white man on the poster was also coming to visit. Some, who had been told beforehand by the Sulabh organisers, went around correcting others — “America ka rashtrapati (President of America).” Since Sulbah selected Marora on June 18, according to the sarpanch, most people only found out about the toilets and the fanfare a day or two ago.

“We are not changing the official name of the village,” said Madan Jha, the press advisor for Sulabh, “We are just putting Trump’s name along with it.” Both he and Pathak spoke about another village in Haryana that had been given Boeing’s name, as the aerospace company had given money for Sulabh toilets. Here, however, Pathak dodged all questions of money coming from either Trump or the US Republican Party. “When we met in America, they really liked our work,” he said. “But we can’t go asking them for money before we do anything in Marora.” Among the distributed pamphlets was one of the Bill de Blasio, the mayor of New York City, dedicating a day to Pathak for his work.

Despite the strange choice of erecting a paean to Trump in the most backward region of Haryana, Sulabh knows toilets are much needed commodity in Marora and its neighbouring villages. Many women expressed a desire to have them constructed in their homes. “We have to go one or two kilometres a way right now, into the jungle,” said Kashmiri, who sat watching the programme along with her daughters. “This is a village of Kumhars and Faqirs, we are poor and we can’t construct toilets on our own.”

Mian Ismail who was monitoring a group of children, recounted the village’s history, “most of the original inhabitants went to Pakistan during the Partition. People kept coming from different areas and settling here over the years. We are all labourers, we earn about Rs 200 a day. We have no land for agriculture,” he said.

“All the land here is owned by two families,” he added, “and they have toilets in their homes.”

Toilets here may not require much behavioural change, as the school girls know how much they need them. Most of them left the closest senior secondary school in the neighbouring village of Malab because the toilets didn’t work, and shifted to schools in the town of Nuh, some four kilometers away. “It takes Rs 300 a month by auto to go to Nuh,” said Jamsheeda, who studies in the IX standard, “and many families don’t want to send their daughters so far.”

Haryana is infamous for girls dropping out of senior schools because they are too far from villages, and girls routinely get harassed in commute.

In fact, Saroj and Rukhsaar are the only two girls from Trump Village pursuing their bachelors in a local college, having somehow persuaded their father to allow them to study. “We told abba that we would never do anything to disgrace him, that we will be good,” said Rukhsaar, “so that he would send us.”

Sabrun, who still goes to Malab, tells the story of a girl who dropped out from her school because, one day she ran out of class and wet her salwar, because she could no longer go without using the toilet. Some girls laugh, some look grim, but they all talk about how painful it can get to not urinate on time, and how often they fall sick. “When it rains, snakes take over the entire area,” added Warsheeda, “then we go with a stick.”

Showkat Ali, the sarpanch, said the previous sarpanch took money from all families, two years ago, for toilets that were never made. Earlier this year, he added, the village got a proper water supply, and soon they would have toilets to go with it.

While big ticket bilateral agreements worth billions of dollars will be on table when PM Modi and President Trump meet, this village is ready to change its name for something as basic as toilets.