Home » News » India » In Parched Rajasthan, Digging up Ponds the Only Way to Control Water Crisis and a Death Trap
4-MIN READ

In Parched Rajasthan, Digging up Ponds the Only Way to Control Water Crisis and a Death Trap

In Rajathan, drought has accelerated the migration to cities because crops are failing and there is no work in the villages.

Hridayesh Joshi
Sukibai, 58, who lives in Saklupura village of Karauli district in Rajasthan, walks more than four kilometers every day — not once but thrice — to fetch drinking water for her family. Shortage of water is a major crisis in this desert state and prolonged dry summer has aggravated the situation as almost all ponds and wells have dried up. Most people are dependent on the hand pumps that have very little water to offer in this scorching heat.

“Most of the time the water that we get from the hand pumps is not worth drinking. We can only use it to wash utensils and bathe the cattle,” says 27-year-old Uday Singh. “Our only hope is rain. When the rain comes, only then we get some relief,” he adds.

Not only Rajasthan, almost the entire country is struggling with an acute water crisis at present. According to data provided by the Central Water Commission (CWC), more than 90 reservoirs across the country have less than 20 per cent water of their total capacity.

In western regions of the country, 27 reservoirs have less than 10 per cent water. According to the Meteorological department (IMD), the country received 23 per cent less rainfall this year between March and May. This is the second lowest pre-monsoon rainfall in the last 65 years.

The situation is particularly bad in Marathwada and Vidarbh regions. Keeping in mind the rain shortfall, the state government has approved a 30-crore fund for cloud seeding plan to trigger artificial rain in these areas.

In drought-hit Chennai, the reservoirs are almost empty and have just around 1 percent water left. Niti Aayog has warned that 21 cities in the country may not have any ground water by next year. It means more than 10 crore people will stare at a ‘no water’ situation.

In places like Rajathan and Bundelkhand, drought has accelerated the migration to cities because crops are failing and there is no work in the villages. “Nobody wants to live in the villages. Who would like to face such a crisis every day?” Says Ram Sahai of Karauli district in Rajasthan.

The ugly side of water scarcity is the health hazards which the poor accept to keep them afloat, despite knowing the dire consequences. Since no agriculture is possible due to non-availability of water in Rajasthan, several poor boys and men go to sandstone quarries where they fall victim to a fatal disease called silicosis. The disease has killed thousands of labourers in the last few decades as silica dust fills their lungs while they cut sandstones in mines.

“The disease is not curable. The labourers are forced to go to sand mines because they have no other alternative to earn their livelihood. Water crisis has compounded their woes because no agriculture is possible in many parts of the state,” says Sarafraz Sheikh, who works for the welfare of silicosis patients in Rajasthan’s Sirohi district. Since there is no agriculture possible in many parts of Rajasthan, several men are forced to work in sandstone mines and fall prey to the deadly silicosis disease. (Photo credit: Hridayesh Joshi)

CAG report of Rajasthan government revealed last year that around 8,000 silicosis patients were detected in the state between January 2015 and February 2017. There are many areas where villages are known as ‘widow villages’ because scores of men from there have fallen victims to silicosis.
Even in such a grim scenario there is a ray of hope. In the last few years, villagers in many parts of the state have dug big and small ponds to collect rainwater which has helped recharge the ground water.

Mojhiram, 51, who lives in a village called Sapere Ka Pura in Mashalpur Tehsil, has dug up a large pond in front of his house with the help of other villagers to collect rainwater. Though the pond has dried up in this prolonged hot summer, the hand pump is still providing water to his family and other villagers.
“The villagers decided to combat the scarcity of water by community efforts. During long summers these ponds help irrigate the fields and perform daily needs. When they (ponds) dry up, we can turn to the hand pumps until the rain refills our ponds,” says Mojhiram.

In the face of adversity and apathy of the administration, the streak of ponds in the villages seems to be the only solution to keep the world alive. 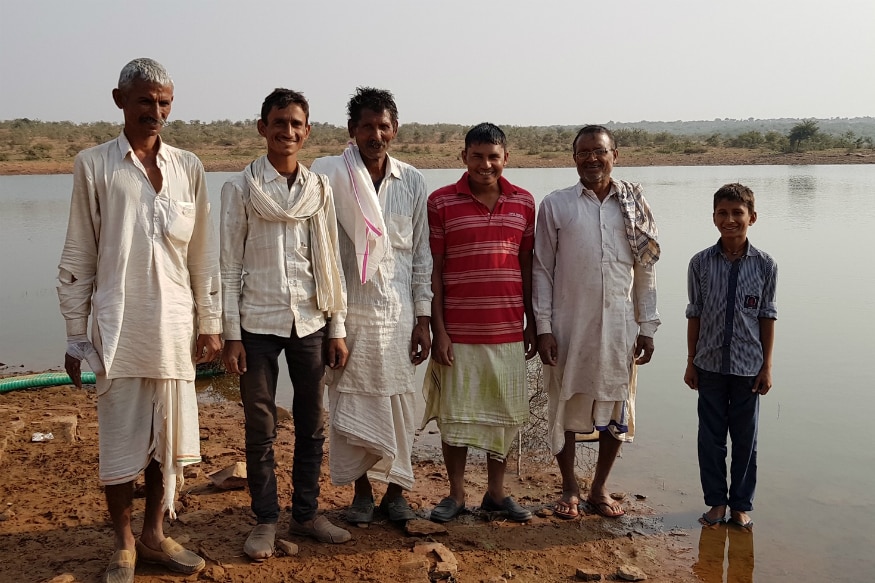 Villagers have dug up ponds to collect rainwater, which helps irrigate their fields and recharge the ground water. (Photo credit: Hridayesh Joshi)

In Mardaikalan, a few kilometers from Mojhiram’s village, more than 100 villagers erected a 60 feet-high mud wall in 2012 to harvest rainwater. This worked well and the pond slowly kept spreading. Today, even in this summer, the reservoir has water to serve the villagers and cattle.

“When the rain comes, this ponds extends to an area of 50 acres. It helps us get water for all our needs,” says 47-year-old Ranveer Singh. Such ponds have helped to recharge the ground water and helped the agriculture.

“Earlier many young men use to go to sand mining in the quarries situated nearby. Now nobody goes there from our village as now we can work in our fields. Apart from combating the water crisis we have successfully fought silicosis in this way.” Says Ranveer.