In Varanasi, New Solar Tech is Helping Beleaguered Saree Weavers Save Their Tradition

A customized system to harness solar energy was designed for weavers by TERI as the craft of saree making is complex and it requires varying degrees of power at a very short intervals.

Hridayesh Joshi
Varanasi: Just 10 kilometers from Varanasi, in Mahmudpur village, 45-year-old Mohammad Hasan recounts the problems faced by Banarasi Saree weavers on a daily basis. Though the sarees have remained the hallmark of the city for decades, the weavers have been struggling to keep the tradition afloat all this while.

The first and foremost challenge, he says, is to get a proper price for the product as they are largely dependent on middlemen, who sell the product at a high cost in market but pay the artisans meagerly. 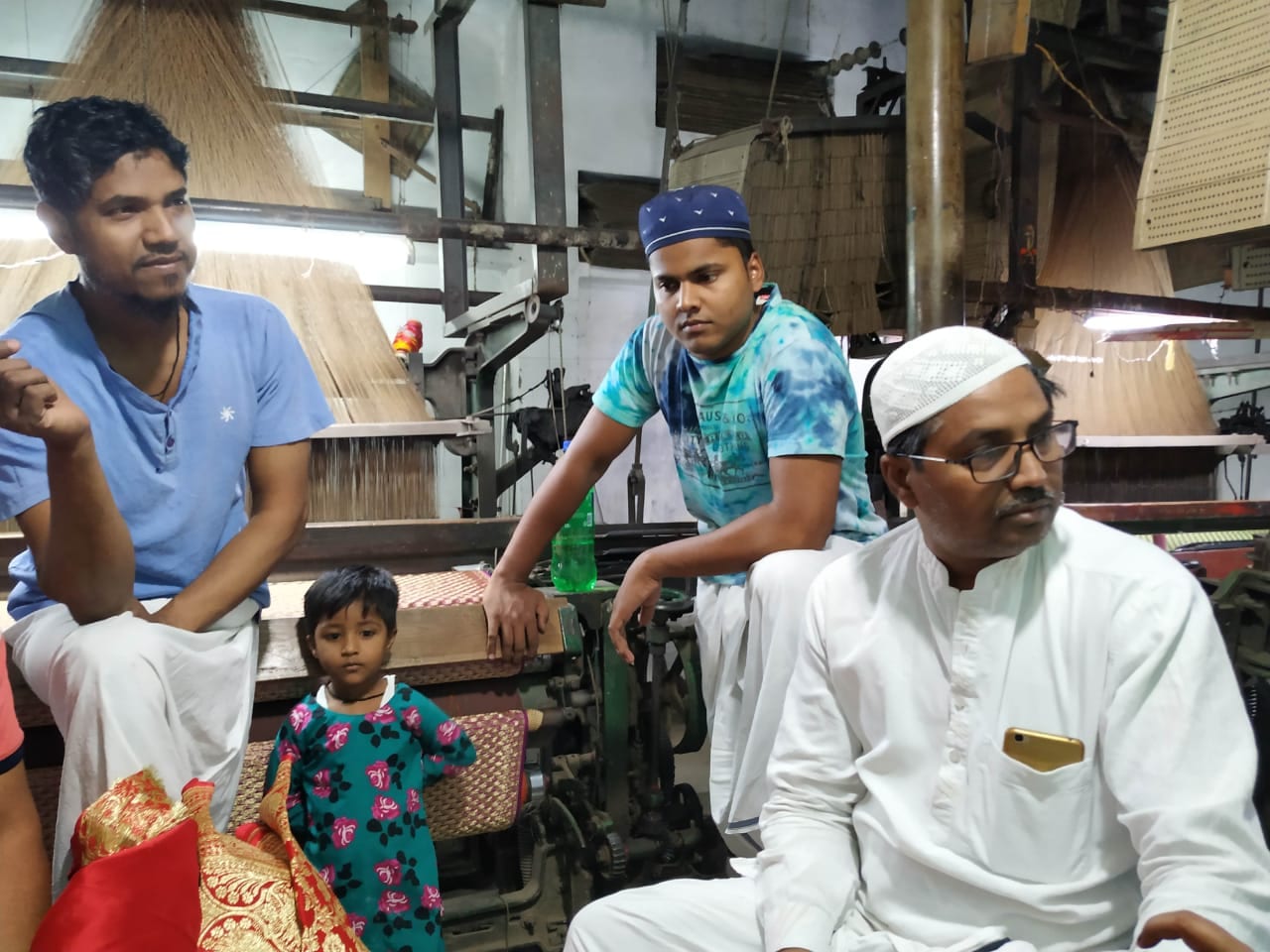 Mohammad Hasan, with his son and brother. In solar energy these weavers have found a solution of erratic power supply which affects their work.

Urging the weavers to go global and adapt to the need of clients, Prime Minister Narendra Modi had recently inaugurated a trade facilitation center at Varanasi, the purpose of which was to connect the weavers with the market directly and remove the middlemen.

However, Banarasi Saree weavers still await customers in these showrooms as there is hardly any footfall in this center.

“Publicity is the biggest problem as you can see there are hardly any buyers present here. Though government has built this huge facilitation center, but the idea hasn’t clicked at least till now”, says 51-year-old Rakesh Tiwari, a shop owner at the center.

Weavers have other problems as well. They face competition not only from the cheaper products from Surat, Gujarat, but also from fake Banarasi sarees made in China.

“Cheap and spurious products from Gujarat and China have flooded the market and it is very difficult for us to compete as it is an uneven contest,” said a shopkeeper in Varanasi.

However, the beleaguered weavers of Varanasi are winning at least one of the many battles they fight every day. It is their struggle with erratic power supply, which reduces their productivity and adversely affects earnings.

“Electricity supply may have improved in the city of Varanasi but in the adjoining villages we still face frequent power cuts. There is almost six to seven-hour power cut every day," says Hasan, who has installed four power looms in his house.

Until a couple of years ago, Hasan had great difficulty. He couldn't use a diesel generator because it would create a lot of noise and air pollution, and the cost of fuel was too high.

Moreover, the expenditure on maintenance and repair of generator was also an issue for the already economically-stressed weaver. Installing a conventional battery invertor was not an option as it takes a lot of space.

“With these looms installed here I had hardly any space left in my house. The old battery invertor would take a lot of space which wasn’t available with me,” Hasan told News 18.

But clean energy coupled with new technology has given the weavers some hope. They have now turned to solar power. Today more than one hundred weavers’ families in and around Varanasi have installed solar panels on their rooftop, which has solved the problem of power cuts completely. 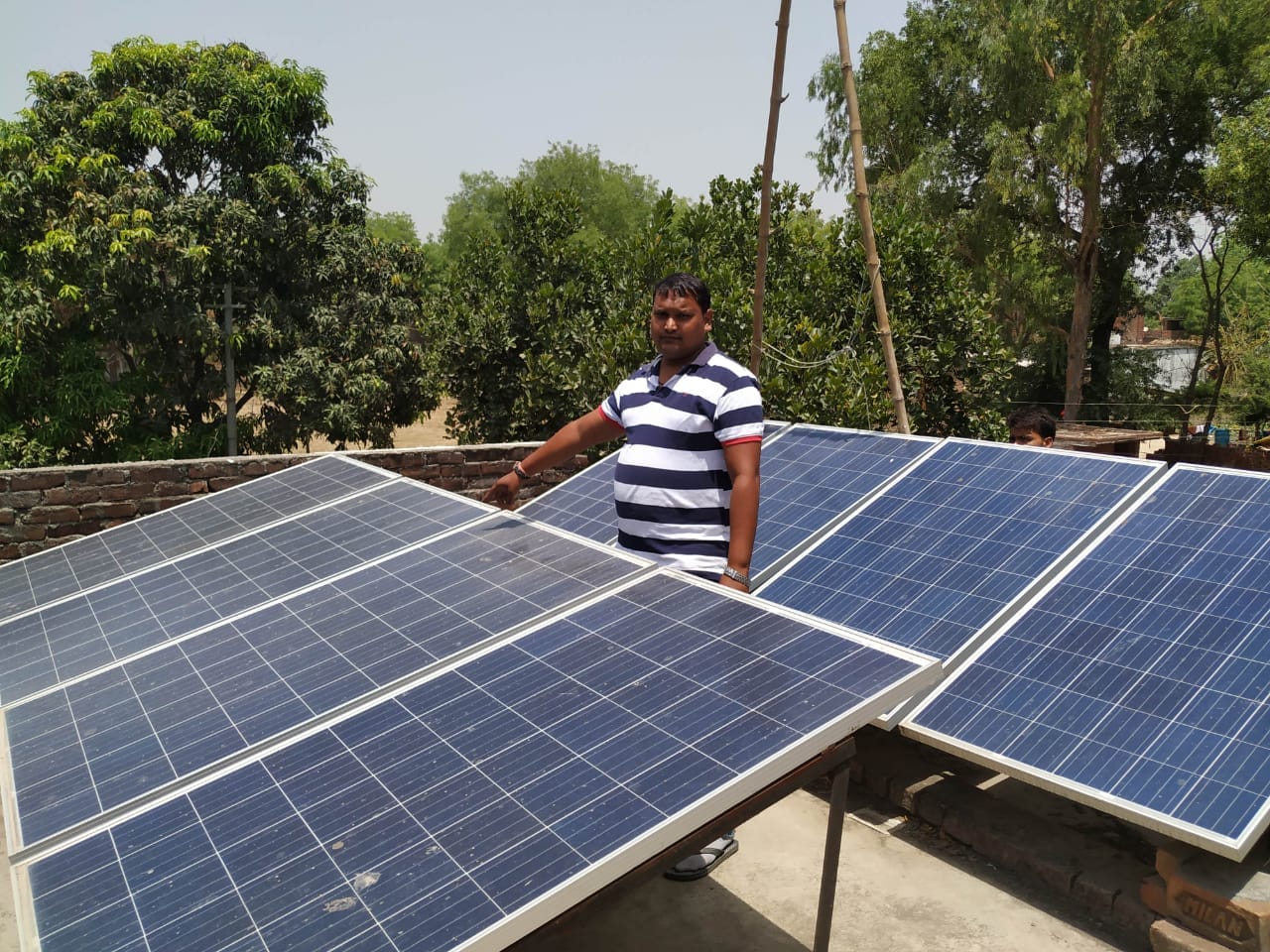 Moreover, with new lithium-based batteries, small and light in weight, weavers have got a power back up system, linked to their solar panels.

The lead acid batteries - used in the old inverters - were bulky and took a lot of time to charge but this power back up catered by solar energy has provided weavers an efficient, cost effective and environment-friendly mechanism.

“Power cuts were frequent and there was a lot of difficulty with lead acid batteries used earlier, as one could not discharge them more than 50% of their capacity. This was an impediment but the new lithium batteries take much lesser time to get charged and one can exploit them as much as 90% of their capacity. This has empowered the weavers a lot,” says Jai Prakash Roy Chawdhary, a technician who deals in solar panels.

Parasnath Patel, who run his small enterprise with 10 employees in village Mathurapur, five kilometres from Varanasi, says he doesn’t need the grid supply all the time now. “Mostly we use solar power and then there is the new solar invertor with us,” he says.

“If the power supply isn’t regular the weavers lose money and they tend to find a job somewhere else. For me it is very important to have a regular power supply to retain the hard-working employees. This set up has helped me a lot,” adds Patel.

Weaver usually earn Rs 500 for one saree but if the power is interrupted, they have to work for long hours, limiting their income.

Over the last three years, Delhi-based The Energy and Resources Institute (TERI) has helped in installing these solar panels and invertors.

Designing the system as per the need of these artisans wasn’t easy. The craft of saree making is complex and it requires varying degrees of power at a very short intervals as less as 10 milliseconds. Therefore, every component of the power system had to be customised according to this requirement.

“Three power sources are involved in the whole structure. Solar, grid and lithium battery. We had to prioritise the source to maintain the seamless power supply. We have introduced 5-Kilowatt capacity invertor which 6.6 KWh lithium battery and 2-Kilowatt photo voltaic solar panel to address the need,” says Jitendra Tiwari, field manager, TERI.

The whole cost of the system is around Rs 5 lakh. While TERI provided technical expertise, more than 70% of the total cost came from Corporate Social Responsibility (CSR) funds of companies. The remaining 30% was borne by weavers themselves.

“Our aim is to empower the weaver to fight the power cuts and reduce the cost of power back up system. But we also reduce the subsidy in every new phase of installation so that the weavers independently bear the cost as they reap the benefit of solar power.”
Tags