Prime Minister Narendra Modi on Monday said in this ‘Amrit Kaal’, every Indian is aspiring to see the fast progress of a new India with enthusiasm and impatience. Addressing the nation from the ramparts of the Red Fort on the occasion of the 75th anniversary of India’s Independence, he termed India the “mother of democracy”. “Our nation has proved that we have an inherent strength from our diversity and the Read More

Chief Minister Bhagwant Mann on Monday dedicated 75 ‘Aam Aadmi Clinics’ to the people of Punjab to mark 75 years of India’s independence and said they will be a stepping stone to revamping the state’s healthcare system. After hoisting the national flag at a state-level function at Guru Nanak Stadium here, Mann inaugurated a clinic at a separate event and said the Aam Aadmi Party (AAP) has fulfilled one of its poll promises. READ MORE

Two More Electrocuted to Death While Putting Up Tricolour in Jharkhand

Two more persons died of electrocution in separate incidents on Monday while putting up the national flag for hoisting in Jharkhand, taking the toll in such incidents since the previous day to five, police said. Three of a family died in a similar incident in Ranchi on the eve of Independence Day on Sunday. READ MORE

A 750 sq ft National Flag was unfurled at historical Lal Chowk by Srinagar to mark the 76th Independence Day celebrations.

It made for a sight to behold when 750 sq ft National Flag was displayed at historical #LalChowk by Srinagar Sector #CRPF in collaboration with @HMIDarjeeling All the civilians n force personnel came together to sing the national anthem n salute the tricolour. @JKZONECRPF @MoDmv pic.twitter.com/5qYK8OWPGC

Among hundreds of NCC cadets seated in the Red Fort’s ‘Gyan Path’ enclosure on Independence Day was Anjali Gehlot (20), who never thought dreams can also come true. Prime Minister Narendra Modi on Monday interacted with NCC cadets dressed in traditional attire and seated in the geographical formation of the map of India in front of Red Fort’s ramparts. All-decked up in traditional Rajasthani attire, she was among the 36 NCC cadets who have come to Delhi from Rajasthan to take part in Independence Day’s celebration. READ MORE

Assam Chief Minister Himanta Biswa Sarma announced that his government will withdraw one lakh minor cases’, including some involving social media posts, to reduce burden on lower courts. Hoisting the national flag at the 76th Independence Day programme in Guwahati, Sarma said there are about four lakh cases pending in the state’s lower courts. The government has decided that one lakh minor cases registered before the midnight of August 14, 2022, will be withdrawn, he said. “This will enable the judiciary to focus on more heinous crimes such as rape and murder,” he stated. 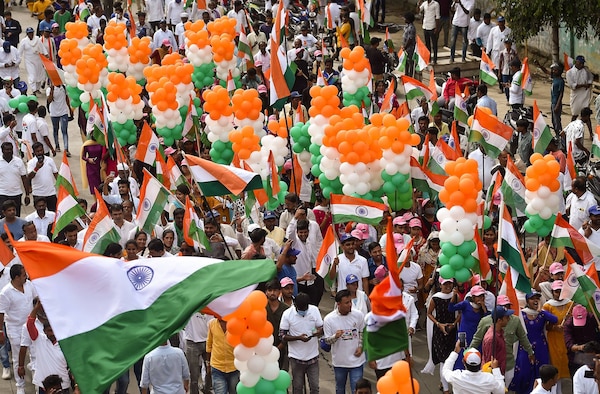 Indian and Japanese officials sang the Indian national anthem on the occasion of India’s 75th anniversary of Independence in the Japanese Embassy in Delhi on Monday. READ MORE

The BJP stalwart and former Deputy Prime Minister L K Advani unfurled the national flag at his residence here to mark the 76th Independence Day. His daughter Pratibha Advani and son Jayant Advani were present along with others on the occasion.

#WATCH | West Bengal CM Mamata Banerjee joins the folk artists as they perform at the #IndependenceDay celebrations in Kolkata.#IndiaAt75 pic.twitter.com/9bvyxFm4qz

Anganwadi workers, street vendors, mortuary workers and mudra scheme borrowers were among the special guests for the 76th Independence Day celebrations at the Red Fort. The August 15 ceremony is particularly significant this year as it marks the 75th anniversary of the country’s independence, with the government launching a host of exercise to add to the verve around the celebrations. Swachhagrah, frontline workers, auto-rickshaw drivers, construction workers and labourers who prepared the majestic tableaus were among the special guests invited to the Republic Day parade in January this year.

Laying out the roadmap for the next 25 years with five pledges towards a developed India, giving a clarion call for respecting women, calling for public unacceptability for corruption and nepotism and a focus on Aatmnirbharta — these were the big takeaways from the nearly 83-minute long address by Prime Minister Narendra Modi from the ramparts of the Red Fort. While no new government scheme or project was announced this Independence Day, Modi focussed on laying out a visionary agenda for the next 25 years with ‘India@100’ in mind. READ MORE

Assam Chief Minister Himanta Biswa Sarma on Monday announced that his government will withdraw one lakh minor cases, including for social media posts, to reduce the burden on the lower judiciary. Hoisting the national flag at the 76th Independence Day function in Guwahati, Sarma said there are about four lakh cases pending in the lower judiciary. The government has decided that minor cases registered before midnight of August 14, 2021, will be withdrawn, he said. “This will enable the judiciary to focus on more heinous crimes such as rapes and murders,” he added. Asserting that Assam is an integral part of India, Sarma said that those who are still dreaming of “sovereignty” should return to the discussion table.

Dear friend @NarendraModi, dear people of India, congratulations on your Independence Day! As you proudly celebrate India’s stunning achievements in the past 75 years, you can count on France to always stand by your side.

We Need to Be Proud of Diversity in Our Country, Says PM Modi

Prime Minister Narendra Modi on Monday hailed the diversity of India and said while our talent may be restricted by language barriers, pride should be taken in the variety of languages that exist in the country. Addressing the nation from the ramparts of the Red Fort on the 76th Independence Day, Modi said India’s strengths are diversity and democracy. “India has many languages, sometimes our talent is restricted by language barriers, we need to be proud of every language in our country,” he said. He also said India’s diversity needs to be celebrated. “India is mother of democracy, diversity is its strength,” the prime minister said.

We Have to Keep India First, This Will Pave Way for a United India: PM Modi at Red Fort

PM Modi to Deliver His Address from Ramparts of Red Fort at 7:33 am

common thread of patriotism makes India unshakeable,” Modi said. An aspirational society is important for any nation. Today, “we are proud that these aspirations are present in every household in India. Every citizen is enthusiastic, impatient for the fast progress of New India,” he said.

PM Modi hoisted the national flag at the ramparts of the Red Fort and addressed the nation on India’s 76th Independence Day. “The citizens are thankful to Bapu, Netaji Subhash Chandra Bose, Babasaheb Ambedkar, Veer Savarkar who gave their lives on the path of duty,” said PM Modi at Red Fort. “Every India is filled with pride when they remember the strength of the women of India- be it Rani Laxmibai, Jhalkari Bai, Chennamma, Begum Hazrat Mahal,” he added.

In line with the “Azadi ka Amrit Mahotsav” celebrations, the Prime Minister chose to wear a white safa with tricolour stripes and a long trail for his 76th Independence Day look. The August 15 ceremony is particularly significant this year as it marks the 75th anniversary of the country’s independence, with the government launching a host of exercises to add to the verve around the celebrations. Wearing the traditional kurta and churidar paired with a blue jacket and black shoes, Modi hoisted the national flag at the ramparts of the Red Fort and addressed the nation for the ninth consecutive time. The safa trail also had similar tricolour stripes as the headgear Modi wore on the occasion.

For the first time, a home-grown howitzer gun, Advanced Towed Artillery Gun System (ATAGS), developed under the Government’s ‘Make in India’ initiative, was fired during the ceremonial 21-gun salute. The gun is completely indigenous, designed and developed by DRDO.

President Droupadi Murmu had a day ago (August 14) addressed the nation on the eve of 75th Independence Day. This was Murmu’s first address to the nation after she was elected President last month.

This year is exceptional for India as the country completes 75 years of Independence. To mark the special day, the BJP-ruled Centre launched the ‘Har Ghar Tiranga’ campaign under which more than 10 million Indian flags have been sold. The Independence Day celebration comes at a time when India, like most countries, is seen to be coming out of the grim shadows of Covid-19, which crippled normal life and marred economic activities after its outbreak in 2020. Modi has often used the occasion to highlight the key outcomes of the measures taken by his government and has at times made important announcements.

India has not only been decked in tricolour hues in the lead up to the Independence Day celebrations, but also put under a heavy security blanket, right from Delhi, the epicentre of the mega celebrations, to Jammu and Kashmir. The police machinery across states has been put on vigil to ensure that the celebrations are not hampered in any way.

In Delhi, where Prime Minister Narendra Modi will be addressing the nation from the ramparts of the historic Red Fort, security has been stepped up with Delhi Police deploying more than 10,000 personnel to guard the Mughal-era monument. From facial recognition system (FRS) cameras installed at the entry point of the Red Fort to multi-layered security cover and deployment of over 400 kite catchers and fliers on rooftops and other sensitive locations in the fort area to counter any threats from sub-conventional aerial platforms — the area is under hawk-eye vigil.

With nearly 7,000 invitees expected to attend the event at the Red Fort, a five-kilometre area around the monument has been marked as “no kite flying zone” till the tricolour is hoisted. Dependra Pathak, Special Commissioner of Police (Law and Order), had said provisions of Section 144 have already been instituted in Delhi. Anti-drone systems from Defence Research and Development Organisation (DRDO)and other security agencies have also been installed, police said.

In the financial capital of the country, Mumbai, several law-enforcing units have been deployed to man the streets of the metropolis along with anti-drone systems, an official said. According to the official, while there was no specific input in view of Independence Day, as a matter of routine, security of vital installations had been increased and officials have been asked to conduct spot visits. “We are conducting anti-sabotage checks. Since Wednesday, ‘operation all out’ is underway comprising checking of hotels, vehicles and road barricading. Action is being taken against history-sheeters and those externed,” the official added.