India Burns as Heat Wave Grips 53.9% of the Population, Churu Worst-hit at 50.8 Degrees

Cities in central and western India are seething this summer with “severe heat wave conditions” prevailing across parts of Rajasthan, Madhya Pradesh and Maharashtra.

Nikita Vashisth
Rishika Pardikar
New Delhi: Over half of India’s population experienced a heat wave in the first week of June, according to temperature estimates from Global Forecast System (GFS) and from Gridded Population of World Version 4 (GPWv4).

The term ‘heat wave’ refers to consecutive days of extreme heat when the rise in temperature is beyond a predefined threshold. For instance, the Indian Meteorological Department (IMD) states that one of the conditions to classify an area as being under heat wave conditions is if the maximum temperature hits at least 40°C in case of plains, 37°C for coastal stations and 30°C for hilly regions.

In the first week of June, 53.96 per cent of India’s population was exposed to air temperature higher than 40 degree Celsius on average.

More specifically, cities in central and western India are seething this summer with “severe heat wave conditions” prevailing across parts of Rajasthan, Madhya Pradesh and Maharashtra. 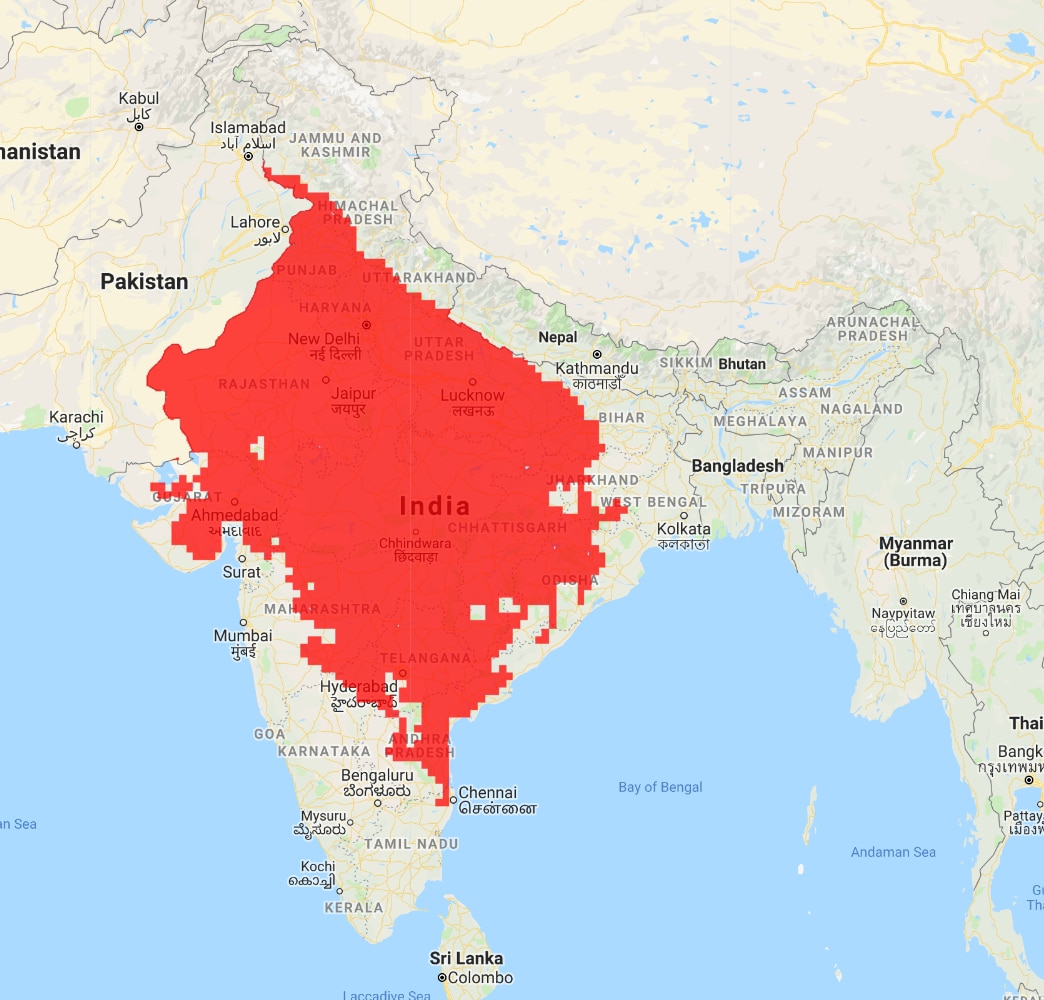 Climate change over the years has led to an increase in temperature as well as increase in the severity and frequency of heat waves. A 2019 EnviStats report by the Ministry of Statistics and Programme Implementation (MoSPI) shows an increase from 44 instances in 1970 to 484 instances of heat waves in 2018 across different states in India. Rajasthan has been the most affected with 144 heat waves in 2017 and 173 in 2018. More recently, Churu, a city in Rajasthan, reached the highest temperature till now of 50.8 degree Celsius.

Historically, the pre-monsoon summer season, which generally starts in the later part of March and lasts till early July, has seen the most number of heat wave incidents. And these months largely disrupt the lives of the most vulnerable sections of the population -- farmers, construction workers, street vendors, etc.

According to a report authored by Hem H. Dholakia, senior research associate, CEEW, heat waves also adversely impact local economies. The report states that heat waves could reduce labour productivity in the agricultural sector by 2 per cent and impact the lives of millions of small farmers.

As for the impact of heat waves on health, two of the most common impacts are heat stress and heat stroke.

The spectrum of symptoms also includes extreme thirst, palpitations, fainting, muscle cramps due to loss of salt from the body because of sweating, severe dehydration resulting in kidney injuries, and it can also exacerbate heart problems.

Children, the elderly and those with pre-existing conditions are particularly vulnerable.

Poornima Prabhakaran, deputy director, Centre for Environmental Health, says rising temperatures and its impact on agricultural output has been “implicated as one of the causes of suicides among farmers.”

“Therefore, the health sector has to be prepared in dealing with vector-borne diseases,” she stated.

In the year 2015, heat waves were recognised as a natural disaster by the National Disaster Management Authority (NDMA) after which they began working towards its preparedness. They have issued yearly guidelines since 2016.

Action plans differ at the state and city level due to vulnerability factors and groups being different. For example, the traffic police personnel in Telangana would be facing different issues as compared to a construction worker in Haryana.

Varying levels of both humidity and temperature vastly impact the human body in terms of heat stress. Dholakia explained that when we make these calculations, the implicit assumption is that humidity remains more or less the same, so it’s only the temperature that’s driving the thermal stress on the body, which in reality seldom happens. In terms of heat stress, we tend to think of Rajasthan, Gujarat and states in north India to experience warm air -- scientifically referred to as ‘loo’ -- where temperatures normally hit 45-46 degree Celsius. On the other hand, temperature in coastal cities may be lower at 37-38 degrees but because of high levels of humidity, the heat stress one feels is as high as someone who’s feeling it in 41-45 degrees.

The current IMD design to measure heat wave is only based on temperature, but going forward the metrics itself might need to be revisited. “This is important because the interplay of temperature and humidity determines the physiologic limit, beyond which survival is threatened,” Dholakia explained.

Kamal Kishore, Member at the NDMA, says, “Calculating heat wave thresholds require complex technical work given it includes multiple parameters that need to be taken into consideration such as temperature variation from the normal, diurnal variation, humidity, and others.” They plan to work on developing thresholds which is a combination of these parameters for different places in the coming years.

From a health perspective, one of the broader issues in India is getting reliable information on health. For example, human deaths are registered within the municipal corporation but if we look at India as a whole, on average, one-third of these deaths registrations are missed. Another big challenge is that the cause of death is not always captured.

Currently, India doesn’t have any centralised system where all health related information from small clinics, government and private hospitals accumulates into one central data pool from where reasons behind this could be inferred. Another systemic issue occurs when people call their general physicians home and this information goes unrecorded. “After all this, collating this information to understand what the real picture looks like is extremely challenging,” adds Dholakia.

As a way forward, Dholakia recommends preventive measures like proper urban planning that would incorporate conservation of water bodies and conservation of urban green spaces because these impact the microclimate of that particular area. The second task at hand is to build infrastructure that can withstand heat.

Beyond this, it is important to create awareness and educate citizens and give them warnings ahead of time.

“The Ahmedabad heat action plan can work as an exemplar for other cities to follow. A systematic response and effective deployment of plan has shown that there can be a marked decrease in mortality,” asserts Prabhakaran.

But a proper response to this disaster is a huge multi-system responsibility by different sectors. For instance, occupational health standards must be re-looked at for those exposed to high levels of heat such as the traffic police, construction workers and farmers along with capacity building for handling the increased burden of diseases when it comes to temperature changes and infrastructural changes.

Kishore said that NDMA would continue working with IMD to further refine localised thresholds and go beyond saving lives to prevent other kinds of impacts on health and loss of productivity.