India-China Border Standoff LIVE Updates: At least 20 Indian Army personnel were killed in violent face-off in Ladakh's Galwan Valley, news agency ANI quoted government sources as saying. Multiple sources had earlier confirmed that the casualty figure was much more than three on the Indian side.

In the morning, the Army said India lost an officer and two soldiers during the violent face-off, while there were casualties on the Chinese side as well. The extent of casualties on the Chinese side is not immediately clear. The officer killed in the clash is Colonel Santosh Babu, Commanding Officer of the 16 Bihar regiment, while the two soldiers were K Palani and OJha, sources said.

Urge Both Sides to Exercise Restraint: UN Sec-Gen | We are concerned about reports of violence and deaths at the Line of Actual Control between India and China and urge both sides to exercise maximum restraint, says UN Secretary-General Antonio Guterres.

Skirmish Began With China’s Refusal to Remove Tent from Key Point 14 | The murderous clash on the Galwan River which claimed the lives of 16 Bihar regiment commanding officer Colonel Santosh Babu and two other soldiers broke out after troops moved to remove a People’s Liberation Army tent set up near a position code-named Patrolling Point 14, inside territory on the Indian side of the Line of Actual Control, highly placed government sources have told News18. Read Praveen Swami's report here

17 Injured Troops Succumbed | Indian and Chinese troops have disengaged where they had earlier clashed. As many as 17 Indian troops who were critically injured in the line of duty at the stand-off location and were exposed to sub-zero temperatures in the high altitude terrain have succumbed to their injuries, taking the total that were killed in action to 20.

Himachal's Lahaul-Spiti & Kinnaur Districts on Alert | The Himachal Pradesh Police has issued an alert in Lahaul-Spiti and Kinnaur districts, which border China, in view of the violent clash between Indian and Chinese troops in eastern Ladakh's Galwan Valley, an official said. Read full article here

Increased Chopper Activity by China | Increase in Chinese chopper activity was observed across the LAC to airlift casualties suffered by them during the face-off with Indian troops in Galwan valley, ANI reports.

The aggressor China paints India as the aggressor and the Indian govt stays quiet and international media picks up Chinese government’s version and India comes across in poor light: Brahma Chellaney

Indian intercepts reveal that the Chinese side has suffered 43 casualties including those dead and seriously injured in the face-off in the Galwan valley, ANI reports.

20 Indian Army Personnel Killed | At least  20 personnel of the Indian Army were killed in the violent face-off in Ladakh's Galwan Valley. Earlier, it was reported that three personnel, including a commanding officer were martyred.

The Indian Army has got tremendous resilience to bounce back. This loss is further going to enhance and strengthen the resolve of the battalion: General (Retd.) Bikram Singh

#NewsAlert – The Indian Army has got tremendous resilience to bounce back. This loss is further going to enhance and strengthen the resolve of the battalion: General (Retd.) Bikram Singh tells @maryashakil. #IndiaChinaFaceOff pic.twitter.com/JwELzYWUGE

India Clear that Its Activities are within Indian Side: MEA | Given its responsible approach to border management, India is very clear that all its activities are always within the Indian side of the LAC. We expect the same of the Chinese side. We remain firmly convinced of the need for the maintenance of peace and tranquillity in the border areas and the resolution of differences through dialogue. At the same time, we are also strongly committed to ensuring India’s sovereignty and territorial integrity: MEA

Face-off Result of China's Attempt to Unilaterally Change Status Quo: MEA | While it was our expectation that this would unfold smoothly, the Chinese side departed from the consensus to respect the Line of Actual Control (LAC) in the Galwan Valley. On the late-evening and night of 15th June, 2020 a violent face-off happened as a result of an attempt by the Chinese side to unilaterally change the status quo there. Both sides suffered casualties that could have been avoided had the agreement at the higher level been scrupulously followed by the Chinese side: MEA

MEA Issues Statement | "India and China have been discussing through military and diplomatic channels the de-escalation of the situation in the border area in Eastern Ladakh," a statement from the Ministry of External Affairs spokesperson Anurag Srivastava said. He added that senior commanders had a meeting to on June 6 wherein they agreed on a process of de-escalation.

India's Territorial Integrity Won't be Compromised: Nadda | I can assure you that under the leadership of PM Modi, India’s territorial integrity will not be compromised. We now have the political will and our Army is fully equipped to take on any adversary. Nobody can cast any ill eye on Modi's India. Borders of India will remain intact and are intact under leadership of PM. During de-escalation process that was underway in Galwan Valley in Ladakh, violent face-off took place with Chinese Army. Indian Army gave a befitting reply. Unfortunately, we lost three army men: BJP President JP Nadda

Proud of His Sacrifice, Says Martyred Colonel's Mother | Colonel Santosh Babu, who was Commanding Officer of the 16 Bihar Regiment, was one of the martyrs in the clashes with Chinese forces in Galwan Valley. On hearing of his death, his mother said, "I am Proud of his sacrifice as a mother, but  I am very much in pain for his demise as he was my only son." News from Ladakh Shocking: Tharoor | Congress leader Shashi Tharoor says that the news "calls for resolute handling by our Govt".

The tragic news from Ladakh is shocking & calls for resolute handling by our Govt. Meanwhile let us bow our heads in tribute to the three martyrs who gave their lives to protect India, & honour those who serve on our borders every day, risking their lives for our nation. #JaiHind

Kamal Haasan Condoles Soldier's Death | We bow to the heroism and sacrifice of Indian hero Palani who died in the conflict with Chinese soldiers on the border. He is our love and deepest sympathies to the family. War worthy of life does not like war. Let’s settle the peace way: Kamal Haasan.

As clashes took place in the Galwan Valley, News18 graphics take a look at the 2017 Doklam standoff. Deeply Disturbed by Death of Tamil Soldier: CM | "I was deeply disturbed by the news of the death of Mr. Palani, a Tamil soldier from Ramanathapuram - Kadukalur village, who was engaged in security work in the area when the Chinese army attacked. My deepest condolences to the family of the heroic Aidiya Palani!" writes Tamil Nadu Chief Minister Edapaddi K Palaniswami on Twitter.

As clashes took place in the Galwan Valley, News18 graphics take a look at the 1987 Arunachal standoff. General VK Singh (retd) reacted to news of Indian soldiers who were martyred in the clashes with the Chinese Army at Galwan Valley.

Saddened by the news of the martyrdom of our boys in the Galwan Valley. I salute their indomitable courage, selflessness & sacrifice.

India stands united behind our armed forces. Country must be taken into confidence urgently. In a Parliamentary democracy, it is expected of the government to brief the leadership of the political parties of the ground situation, considering the grave implications: Congress Spokesperson Anand Sharma.

The violent clash between the Chinese and Indian Army in Galwan valley of Ladakh causing death of Indian Commanding Officer and Jawans is a matter of serious national concern. India's security and territorial integrity are non-negotiable.

As clashes took place in the Galwan Valley, News18 graphics take a look at the 1967 Nathu La and Cho La clashes. 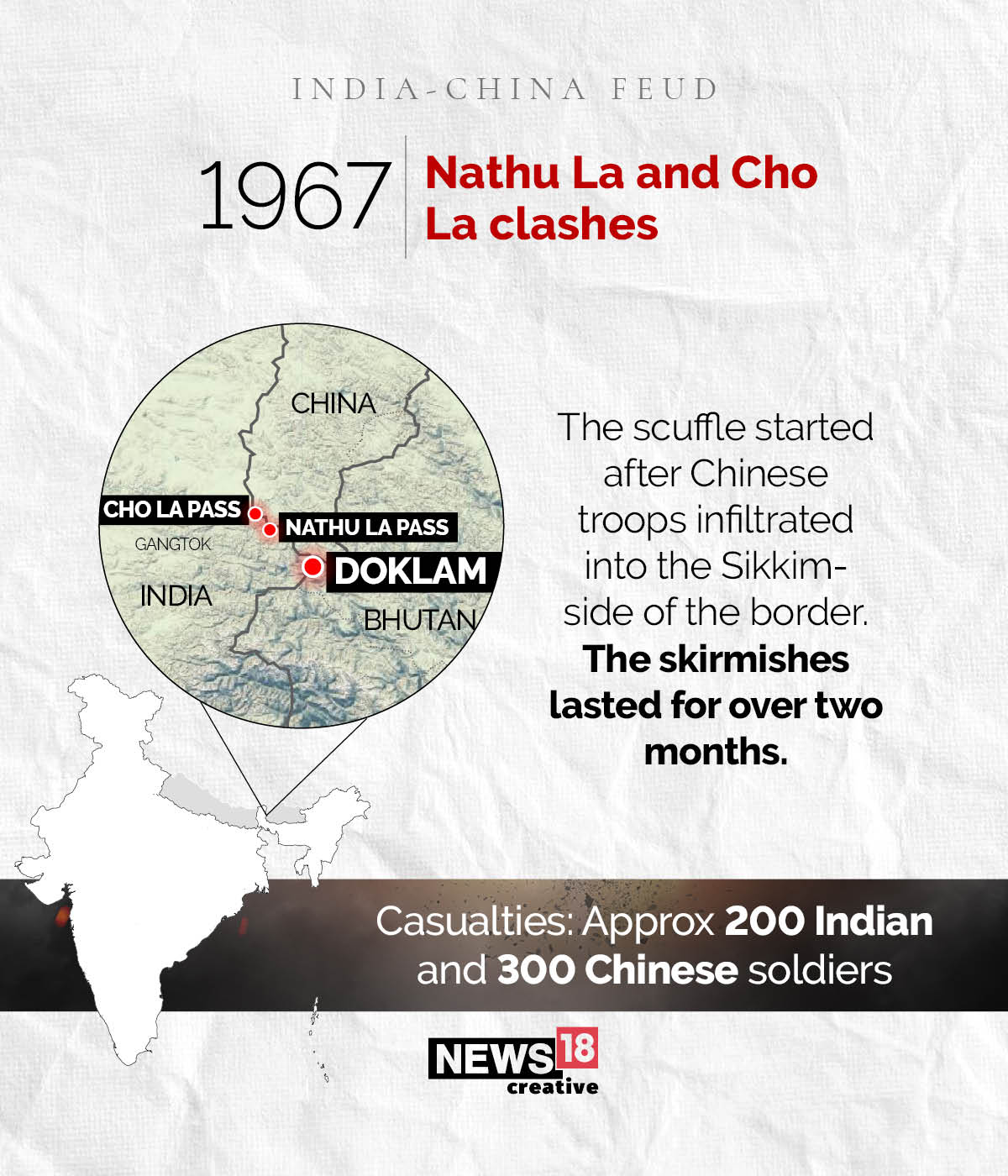 Incident Comes amid Disengagement | A large number of Indian and Chinese troops were engaged in an eyeball-to-eyeball situation in Galwan Valley for the last five weeks. This incident comes days after Indian Army Chief Gen MM Naravane said both sides have begun disengaging from Galwan Valley. The two armies have since withdrawn some forces in a positive signal but soldiers, tanks and other armoured carriers remained heavily deployed in the high-altitude region, an official had said.

Incident Comes amid Disengagement | A large number of Indian and Chinese troops were engaged in an eyeball-to-eyeball situation in Galwan Valley for the last five weeks. This incident comes days after Indian Army Chief Gen MM Naravane said both sides have begun disengaging from Galwan Valley. The two armies have since withdrawn some forces in a positive signal but soldiers, tanks and other armoured carriers remained heavily deployed in the high-altitude region, an official had said.

If the Chinese shoot dead an Indian army colonel & two jawans during a “de-escalation process” imagine how escalated the situation must be in the first place. This is what happens when the media propagates the government line that asking questions is anti-national.

Lodged Protests to India: China Foreign Min | China has lodged solemn representations and protests to India. Here, we are sternly demanding India to earnestly abide by the relevant agreement and strictly restrain their frontline troops. They should not cross the borderlines: Zhao Lijian, Chinese Foreign Ministry Spokesperson


The Ministry of External Affairs has said that both China and India suffered causalities as Beijing tried to unilaterally change status quo and "departed from the consensus to respect the Line of Actual Control (LAC) in the Galwan Valley".

While the exact nature of the violent confrontation is not known yet, sources said no firearms were used. "During the de-escalation process underway in the Galwan Valley, a violent face-off took place yesterday night with casualties on both sides. The loss of lives on the Indian side includes an officer and two soldiers. Senior military officials of the two sides are currently meeting at the venue to defuse the situation," the Army said in a brief statement.

Chinese foreign ministry spokesman Zhao Lijian said he was not aware of any incident on the border with India.

A large number of Indian and Chinese troops were engaged in an eyeball-to-eyeball situation in Galwan Valley for the last five weeks. The incident comes days after Indian Army Chief Gen MM Naravane said both sides have begun disengaging from Galwan Valley.

The two armies have since thinned out some forces in a positive signal but soldiers, tanks and other armoured carriers remained heavily deployed in the high-altitude region, an official had said.

India and China fought a brief border war in 1962 and have not been able to settle their border despite two decades of talks. Both claim thousands of kilometres of territory and patrols along the undemarcated Line of Actual Control - the de-facto border - often run into each other, leading to tensions.