File photo of the Dalai Lama.

On March 30, 1959, the Dalai Lama and 20 of his guards escaped China and entered India through Kinzmane. He was then brought to Tawang where he was accorded a grand welcome before being finally taken to Dharamshala, the capital of Tibet in exile.

Subhajit Sengupta
New Delhi: On March 30, 1959, the Dalai Lama and 20 of his guards escaped China and entered India through Kinzmane. He was then brought to Tawang where he was accorded a grand welcome before being finally taken to Dharamshala, the capital of Tibet's government-in-exile.

Three years later, the Chinese decided to attack India through the same area. China claims Arunachal Pradesh to be part of south Tibet. This week, the Dalai Lama is back at Tawang on a religious tour. He was to have started the visit on Tuesday but overcast conditions forced him to abandon the chopper and travel by road. He is now scheduled to reach Tawang on April 7.

Any visit to Arunachal by Dalai Lama has always been controversial and has led to stiffening of relations between India and China. Though he visited the state in 1983, 1997, 2003 and 2009, never has the visit been so political and bold. Even during his weeklong visit in 2009, the then chief minister of Arunachal went on record to say that the Dalai Lama would stop at discourse, his was a purely religious visit and had nothing to do with politics. This time, Union Minister Kiren Rijiju would be escorting him in Tawang. The Dalai Lama walks in disguise during his escape from Tibet in 1959. (Pic Courtesy: Prasar Bharati)

The government, too, it seems, has decided to make a subtle push towards asserting itself. While the programmes in Arunachal are strictly religious, in Assam he was made the guest of honour at the Namami Brahmaputra event where he spoke about the spiritual link with the river, which originates in his homeland Tibet.

Brahmaputra, like certain parts of Arunachal, has been a sore spot in India-China relations. India has raised objection to the fact that China has blocked a tributary of the Brahmaputra in Tibet as part of the construction of a hydro-power project and has said that it may impact the water flow into the country, especially in states like Assam.

At the festival, India chose to flaunt how the spiritual head of Tibet was escorted to India from Zuthangbo on the Sino-India border by the guards of Assam Rifles in 1959. At an interactive session of Namami Brahmaputra, the last surviving member of the Assam Rifles who escorted him to India was invited. A visibly moved Dalai Lama embraced the retired jawan, Naren Chandra Das, after saluting him. 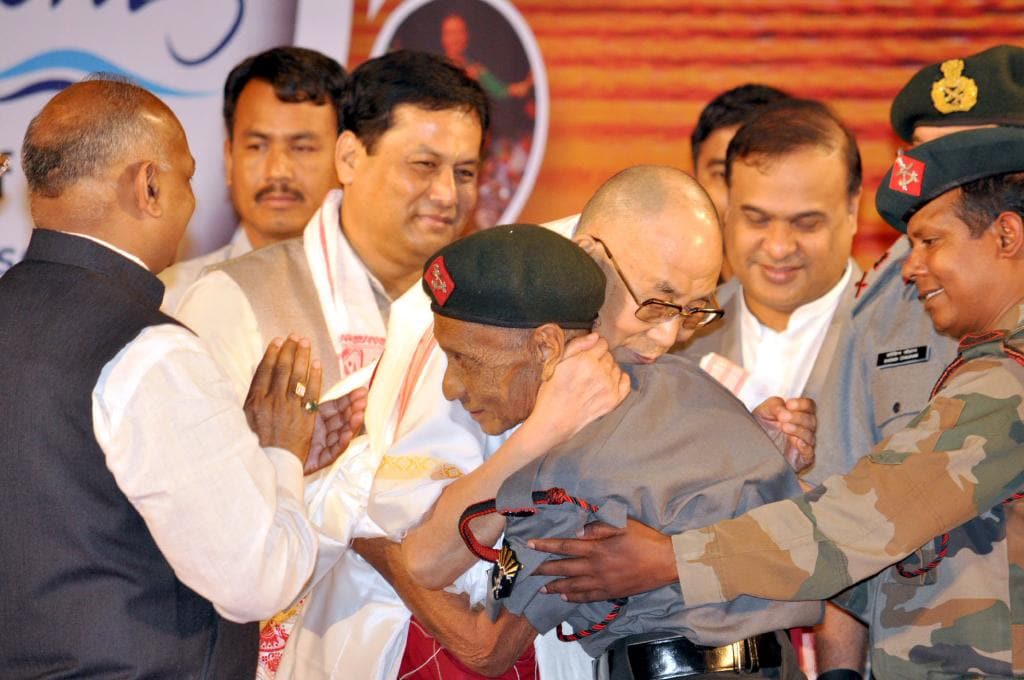 This even as China has issued three warnings in the wake of this visit, the last being on Friday when it said that the Dalai Lama's visit to Arunachal Pradesh will cause "serious damage" to bilateral ties. Lu Kang, the foreign ministry spokesperson of China, asked India to make a 'choice'. “China and India are two major developing countries and we are close neighbours. It is very important for the two peoples to maintain sound and steady China-India relations.... But such a relationship has to be built on certain foundations. Such visits will have deep damage on China-India relations. We have asked India to stick to its political pledges and not to hurt China-India relations. It will come down to India to make a choice (sic).”

But India was quick to brush aside the Chinese objection with MoS Home Kiren Rijiju, who is known for his hard-line stand against China, telling the media: “We are not interfering in the internal matters of China and that country should not interfere in ours.”

Dr Alka Acharya, former director of the Institute of Chinese Studies at Jawaharlal Nehru University and currently professor at the Centre for East Asian Studies in JNU, agrees that India is more assertive now than it was in the past. Acharya, however, says that it is also the current ambience adding to it. “The context is far more volatile this time with the India-China relations going through a rough patch because of Pakistan, the Nuclear Suppliers’ Group and Masood Azhar.”

She maintains that India's decision might sour the relation between the two countries further. “There is always that certain level of tension and turbulence between China and Tibet. The Chinese leadership always wants to be seen in control. While India is not raising the issue of Chinese conduct within Tibet, we are not averse to bringing in the spotlight something that detracts from China's stature internationally. These occasions bring the Chinese to the point where they oppose or condemn his activities and this once again enhances their authoritarian and intolerant position.”

As MoS Home Kiren Rijiju escorts Dalai Lama across Arunachal, it is important to note this visit in the context of what has been happening in this sector. Whether the very public inauguration of IAF Advanced Landing Ground at Tuting, in Upper Siang, Arunachal in December or sanctioning of an estimated Rs 50,000 to 70,000 crore for construction of railway lines between Tawang (Arunachal), Silapathar (Assam) and Bame (Arunachal), and Murkongselek (Assam) and Pasighat (Arunachal), India is seen to be shoring up the defences on the eastern front . While it has not gone for a direct confrontation with China, India is seen to be making a quiet assertion by making it clear that Chinese overtures in Arunachal are definitely not welcome.
Tags